Are we into week five of lockdown? Maybe it’s week six? Either way, it’s another week of creative focused almost exclusively on COVID-19.

The speed of work is impressive and this week there’s been another scattering of campaigns that have quickly adapted to the moment to offer positive, hopeful takes on tough times.

But, given this crisis is with us for the foreseeable, it would be remiss to not look at work through a critical eye, through the eye of the public who consume the work. They won’t suddenly have a soft spot for campaigns that lack originality or miss the mark, so neither should we.

That said, there are a lot more hits than misses out there currently.

The BBC might struggle with debates about its news content during crises, but its creative and programming initiatives continue to be a real shining light. This week it announced a range of 'lockdown learning' classes on the day schools were due to start the summer term.

Rather ominously, there’s enough content there for 14 weeks of learning.

What makes this a creative hit, though, is the use of such high-calibre BBC talent: geography lessons from Sir David Attenborough; science from Professor Brian Cox; and history from the one and only Danny Dyer. Other household names such as Sergio Aguero, teaching Spanish, will no doubt make this a hit with parents and children alike. It’s a great build on CBeebies' Tom Hardy-narrated Bedtime Stories. Public service broadcasting at its best.

I’m certain I’m not alone in religiously combining a trip to Croydon’s iconic twin chimneys with an almost ritualistic plate of Swedish meatballs. Ikea’s meatball recipe was released using the design of its instantly recognisable furniture-assembly instructions, complete with its unique take on the human form.

This could have just been a recipe release, written and presented like every other recipe in the world, but, in keeping to the IKEA assembly instructions design, it becomes an instant hit and far more shareable. It’s a prime example of the ‘obvious’ creativity Kev O’Sullivan referred to yesterday on PRWeek. My weekend cooking’s sorted.

Missing your IKEA meatball fix? We’ve created a recipe for you to recreate this delicious dish in the comfort of your own home #IKEAmeatballs pic.twitter.com/d89lRsJxH7

Fridays for Future, 'Our House is on Fire'

Is this a non-coronavirus campaign we see? Wednesday was Earth Day and the pick of the day’s campaigns came from Fridays for Future, Greta Thunberg’s organisation.

The ad shows a family getting ready in the morning – the usual stuff, trying to wake the kids up, making breakfast, finally leaving the house. Throughout the spot there’s a fire developing across the house, growing until it’s at the point of inferno. The parents remain completely oblivious as they wave the kids off to school.

It’s hard to know if the use of the home was a direct reference or not to lockdown measures, but this ad would have been as impactful regardless of the current situation. It’s a simple way to instantly get a powerful message across about climate change.

You book space for your first out-of-home ad campaign as the world emerges from winter and gets out and about. But the world gets turned upside-down and no one can leave their home. That’s the scenario fruit and veg-based snacks brand Emily faced and overcame with some aplomb.

A series of smart ads made the most of a bad situation, for example: “Do an ad when it’s warmer, they said. More people will see it, they said. Pfft.” Or my favourite: “Our first ever poster, seen by a runner and a pigeon. Typical”.

It’s made for a positive and successful social-media advertising campaign for the brand too, even if it's essentially paying twice. It’ll be interesting to see whether it maintains the tone of voice in future campaigns or slips back into a more generic health-food-type approach. 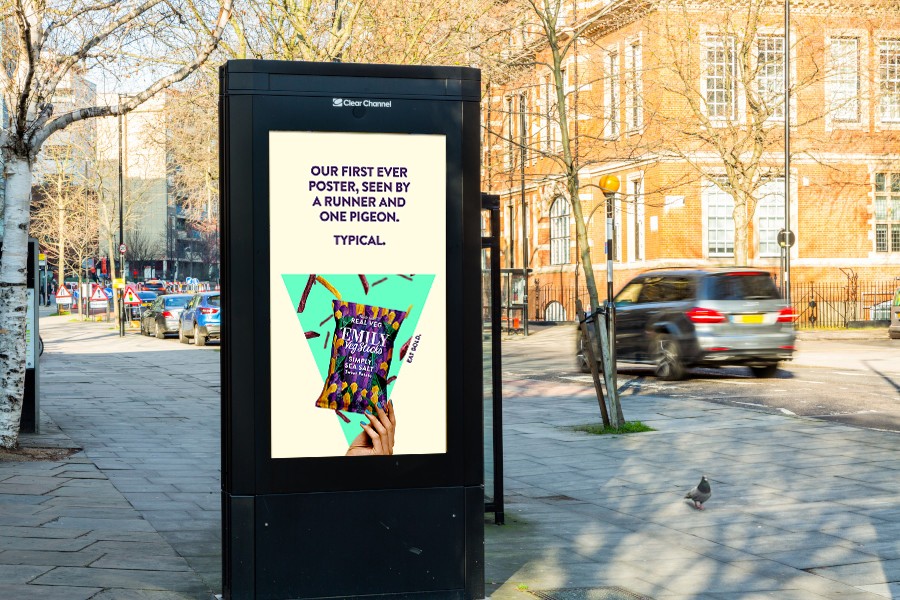 Gumtree is the focus of this week’s misses, but it’s not alone in this. I can instantly see where it’s coming from and it’s by no means a poorly executed ad. Gumtree, of course, usually encourages us to leave our homes to buy and sell within local communities, often face-to-face.

The ad in question features shots of front doors across the UK with a spoken word poem saying thanks to the various numbers of homes in question. It’s not that it’s offensively bad, I just don’t feel any pride in being thanked by Gumtree.

If it was an ad by the NHS then it might resonate better, but when Gumtree, Cathedral City and the likes of BMW are thanking me for staying home, it just feels like the new iteration of floating something down the Thames or putting a bus in front of Parliament. The industry has slipped into this theme of advertising rather quickly. By all means, use the platform to thank the NHS; thank your key workers and employees for adapting; but don’t thank me for sitting on my sofa.