Once again we find ourselves glancing enviously at the far side of the globe for what true, empathetic leadership looks like. Following well-received, lighter remarks about the Easter Bunny’s ‘key worker’ status, New Zealand premier Jacinda Ardern got serious, announcing that she (and the rest of her ministers) would take a 20 per cent pay cut, in solidarity with those affected by coronavirus.

Contrast that with health secretary Matt Hancock who, when asked whether he would do the same by Piers Morgan, said no, but that he’d work harder. A questionable stance, given the financial hardship facing huge swathes of the population.

Important to note that I asked Hancock this question primarily because the New Zealand PM @jacindaardern & her cabinet have just cut their own pay by 20% for 6 months. https://t.co/DWK3ArCxaa

It's heartening that actions such as the Co-op's seem fairly standard these days, but the group deserves plaudits for its work in the past week to help those in need during the current crisis.

The operator garnered positive headlines when it announced plans to raise £30m for people hardest hit by the lockdown by letting members donate unspent reward points to a new fund.

Crucially, chief executive Steve Murrells pledged 20 per cent of his salary for the next three months to the fund, which will contribute to food banks, funerals and other causes.

It came one week after the Co-op abandoned its Easter TV campaign to donate the airtime, worth £2.5m, to food bank charity FareShare.

The lasting impression is of an organisation that genuinely cares.

Captain Tom Moore knows how to walk the walk. The Second World War veteran has raised a staggering £17m for the NHS by walking laps of his backyard. He beat his initial target of 100 on Thursday and will continue for as long as his efforts receive donations. 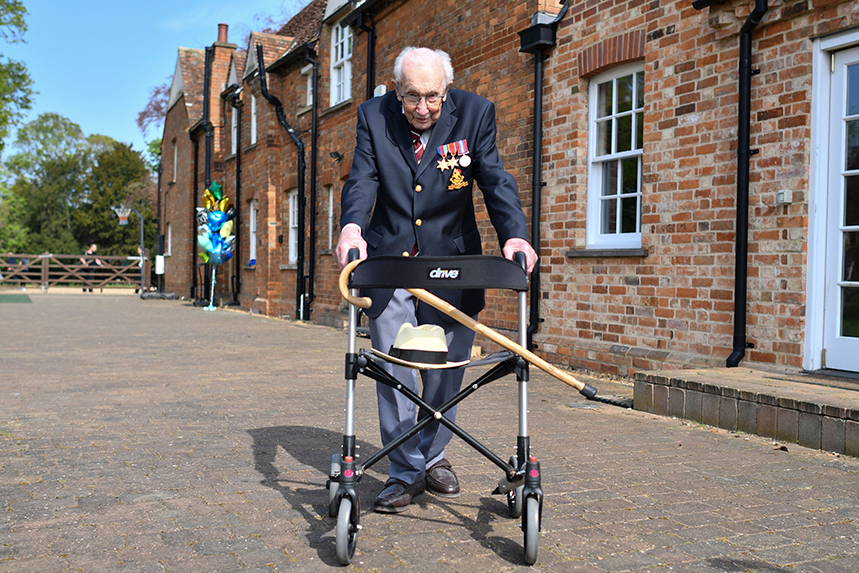 Moore, who turns 100 on 30 April, has captured the heart of a nation. He has received more than 850,000 donations, widespread global media acclaim, messages of support from luminaries including the Duke and Duchess of Cambridge and even calls to receive a knighthood. Not bad when you consider his initial target was to raise £1,000.

Captain Tom’s heroic effort will be one of the enduring symbols of how ordinary Brits did their part to defeat the deadly pandemic for generations to come.

No-one would argue that the principal behind giving care workers more recognition isn’t an admirable one. However, Health Secretary Matt Hancock’s ‘new’ care badge launch has backfired, with eagle-eyed observers pointing out that it was actually rolled out last year, and that care homes are being asked to pay for them.

It also provoked an angry reaction on social media, with critics suggesting it was a hollow gesture and what care workers really need is proper personal protective equipment (PPE) and to be paid the living wage.

At a time when society is flooded with misinformation and fake news, it is remarkable that a morning TV presenter would give oxygen to a widely-debunked conspiracy theory about 5G technology contributing to coronavirus.

ITV's This Morning on Monday host Eamonn Holmes did just that by casting doubt on media reports refuting the myth that 5G causes the virus "when they don't know it's not true". Holmes tried to caveat this controversial view a day later by suggesting that while there was no proven link, he was only “seeking answers”.

Ofcom received 419 complaints about his remarks and will investigate. There’s no doubt ITV’s reputation will have taken a hit. During a deadly pandemic, the media entertaining conspiracy theories about coronavirus can have dangerous consequences.

Addressing the nation on coronavirus can't be easy, and I have sympathy for any minister stepping up to the podium to deliver grim news. But Home Secretary Priti Patel sadly received a backlash for what has been described as a 'non-apology' apology.

Asked if she would apologise about the lack of PPE being provided to frontline NHS staff, Patel said: “I’m sorry if people feel that there have been failings."

It was a shame the incident took headlines away from the Home Secretary's announcement of a new public awareness campaign for domestic abuse victims.