The new Labour leader has cut a statesman-like figure since winning the vote to succeed Jeremy Corbyn last Saturday.

His acceptance speech focused entirely on the coronavirus fight, emphasising his willingness to work "constructively" with the government while also holding the executive to account.

His well-publicised letter of apology to the Jewish community over antisemitism within the Labour Party was also a good first step to help heal wounds after the Corbyn era.

Starmer's detractors have accused him of having wooden delivery, and the Holborn and St Pancras MP is still in his 'honeymoon' period (if that's the right word for it). But in this time of national crisis, the 57-year-old's stoic, dignified demeanor points to a positive start.

Could Emily Maitlis’ introduction to Wednesday’s Newsnight be the most powerful and poignant coronavirus reality check to date?

Maitlis reminded viewers that the “language around COVID-19 has sometimes felt trite and misleading”. She correctly pointed out that deadly diseases are not great levellers and cannot be overcome with “fortitude and strength of character”.

They have a disproportionate impact on poorly paid frontline workers – shelf-stackers, nurses, social-care workers – and those living in social housing and tower blocks will find lockdown tougher than those living in countryside mansions.

Thank you, Emily, for speaking for the nation.

Emily Maitlis speaking for the nation on Newsnight ????????pic.twitter.com/NnDeSK2uqh

Plenty of rich and famous folk have donated money to the coronavirus cause, but former McLaren F1 boss Ron Dennis will make a tangible difference with his scheme to supply a million free meals to NHS workers – an idea reportedly inspired by his children. With a £1.5m budget and taskforce including Tesco supremo Dave Lewis, the idea looks to have real substance.

Dennis, no shrinking violet, said of himself: "It is an amazing effort, which I think is reflective of my reputation. If I say I'm going to do something I do it."

'I decided to really try and step up to the plate.'

Former McLaren boss Ron Dennis is using his foundation to deliver a million meals to NHS workers in three months.

A great initiative to help NHS frontline workers through the crisis ?? pic.twitter.com/k9sBII8U8d

Increasing focus is being placed on companies to practice what they preach in this new era of purpose and responsibility, but that principle also applies to individuals. Unfortunately, the (now former) Scottish chief medical officer fell foul of these 'rules' when she visited her second home – not once, but twice – while fronting TV and radio campaigns urging the public to stay at home to save lives and protect the NHS. She was forced to resign over the "mistake".

BREAKING: Scottish medical chief Catherine Calderwood has apologised for going against her own social distancing advice during the #coronavirus pandemic.

She said: "What I did was wrong. I'm very sorry. It will not happen again."

Australia’s longest-serving foreign minister, Alexander Downer, who downplayed the coronavirus threat for weeks, caused controversy by suggesting that tackling the crisis is a choice between “saving avoidable deaths” or “saving society”.

Downer has worked in the UK as a diplomat and is executive chair at King’s College and chair of right-wing think tank Policy Exchange. If previously comparing the severity of COVID-19 to the plague – an absurd notion, when you consider medical and health standards in the 1300s – isn’t bad enough, suggesting the crisis is an either/or scenario (it isn’t) in which we “accept avoidable deaths to save society” is incredibly tone-deaf at a time when the UK Prime Minister is in intensive care and thousands are dying. 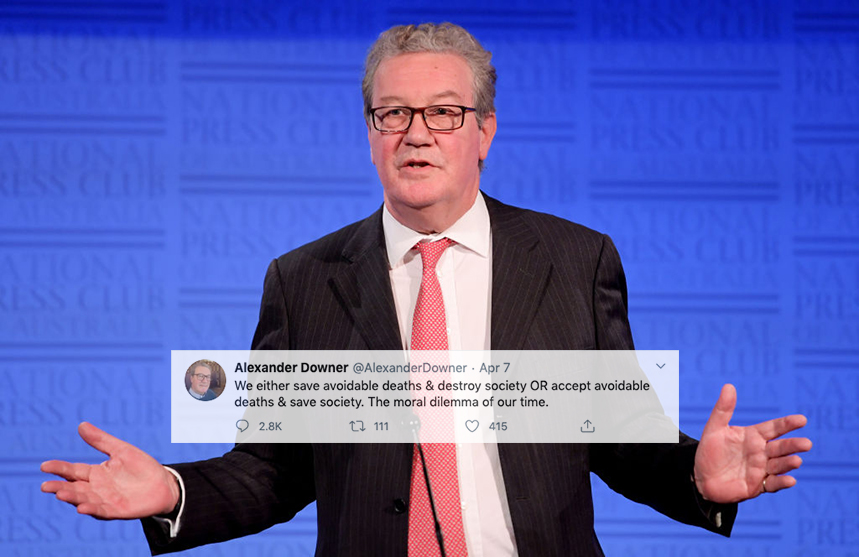 In what is becoming a familar tale, health shop chain Holland & Barrett received negative publicity this week for its treatment of employees during the coronavirus crisis.

The retailer said it will keep its shops open during the pandemic, arguing that it's an essential service because some of its products cater for people with specific dietary needs. Holland & Barrett also said it has provided gloves, masks, hand sanitiser, and shielding screens at the counter, while social distancing is being enforced.

A staff petition opposing the move has gathered more than 5,500 signatures to date.

One worker is quoted by the BBC as saying: "Holland & Barrett is putting our lives in danger with the pursuit of profit over life.

"The general atmosphere is one of fear and stress with a lot of our workers and colleagues quite frightened to speak their minds."

Putting the merits of Holland & Barrett's arguments to one side, its failure to win over a substantial number of employees ultimately led to this comms failure.