Hiscox Insurance has turned down a coronavirus-related claim by an agency that thought it had been covered for contagious diseases, warning “these types of events are simply too large and too systemic for private insurers to underwrite”.

The case is one of the first relating to COVID-19 and offers a warning to other businesses who have taken out specific coverage related to contagious viruses.

Media Zoo, which employs more than 130 staff in its PR, film and online learning businesses, has lost about 15 per cent of its business worth “hundreds of thousands of pounds” since shutting its Imperial Wharf offices (pictured below) near Fulham two weeks ago.

Media Zoo took out the insurance because it “saw COVID 19 coming” and said it had been advised by its insurance broker that it would be covered in the event the pandemic would force its offices to close.

The policy related to “the inability to use the insured premise due to restrictions imposed by a public authority” that was caused by “an occurrence of a human infection or human contagion disease, an outbreak of which must be notified to the local authority”.

Hiscox rejected the claim on the basis that: “cover only applies when there is an incident within a one-mile radius of the insured building”.

The Hammersmith and Fulham Borough has 230 confirmed cases of coronavirus in an area that is about 10 miles squared. 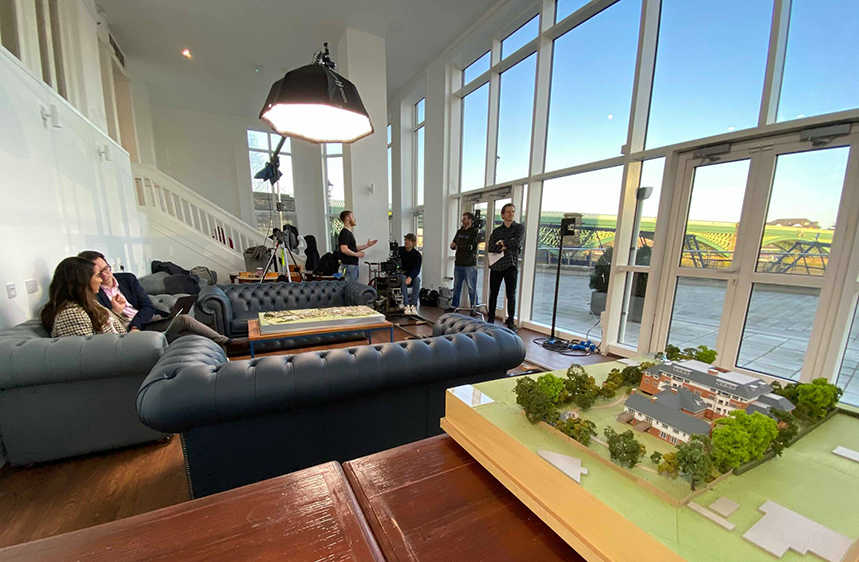 The insurer told PRWeek the policy is designed to only cover businesses that have been forced to shut down their office due to a contagious disease being found on the premises or within a one mile radius.

As the government has directed offices to close, the policy does not apply.

“The government’s decision to close businesses is part of a package of measures to prevent the spread of Covid-19 across the country and therefore isn’t aimed at an outbreak traced to an individual business’s premises,” a spokesperson told PRWeek.

“It is intended to cover against an occurrence within the business’s premises, or in the immediate vicinity, such as Legionnaire’s Disease or norovirus, triggering a requirement on the policyholder to notify the local authority which subsequently requires those specific premises to be shut and thoroughly cleaned and/or the source remediated.”

The insurer said that business interruption policies across the industry were not designed to cover the “extraordinary circumstances the pandemic has caused”.

“Like terrorism and flood risks, which have government-backed schemes, these types of events are simply too large and too systemic for private insurers to underwrite,” a spokesperson added.

Media Zoo managing director Rachel Pendered said the agency had felt let down by “an old school insurer” that it thought “its word was its bond”.

She added: “Sadly, they have no intention of paying the claim and I suspect it won’t just be us that they are planning to let down”.

Media Zoo creative director Mark Killick said he found it “extraordinary that a major player like Hiscox Insurance seems to be trying to evade its responsibilities”.

“The insurance industry looks set on doing everything it can to avoid paying out on legitimate COVID 19 claims,” he said. “We know that others have also been let down so will take this matter further and ask the Secretary of State for Business to investigate.”

PRWeek approached the Association of Business Insurers (ABI) for further clarity about what businesses are covered for “Business Interruptions' against the coronavirus pandemic.

The ABI declined to comment on the case, but provides guidance on ‘Business Interruption’ coverage related to COVID-19.

The guidance said that a very small number of businesses may have cover in place that specifically provides cover for contingency business interruption arising from coronavirus, “where their premises have been contaminated” and if “certain policy conditions are met”.

“However, this type of extension is not commonly included as standard. Furthermore, the likely costs to businesses of cover that would include more unusual risks – such as those posed by new diseases – would be prohibitive.”

The ABI warns against businesses cancelling these insurance policies if they aren’t able to operate due to the pandemic.

“Even in a time when a business is unable to operate as usual due to the impacts of COVID-19, it’s important that businesses remain covered for standard risks, many of which may be more likely when the property is unoccupied, such as vandalism of the property, theft of stock or equipment, or even loss of information or damage to IT systems and networks,” the ABI’s guidance stated.