Sunak’s appointment to the Treasury in February – in the wake of Sajid Javid's resignation amid a cabinet reshuffle, when it was reported that he had refused a demand to fire his team of advisers – left a big question mark over the power of the Treasury, and whether the MP for Richmond in Yorkshire would be a Chancellor in name only.

However, his swift ascendancy has appeared justified by his calm and confident style during the COVID-19 pandemic, in comparison to the Prime Minister, whose comms style and inconsistent approach has drawn some citicism.

PRWeek has spoken with several public affairs professionals who take the view that Sunak has deserved the plaudits he has won, from within the Treasury and from across the political divide – although one was left wondering how much of a bearing our school days have on our present-day style.

Mo Hussein, director of public affairs at PLMR and a former Government special adviser, said the Chancellor comes across as someone who is both engrossed in the details but also has a human touch.

“It was striking that he spoke about the importance of individual acts of kindness and how ‘we want to look back on this time and remember how we thought first of others and acted with decency’ – welcome and reassuring words at this time, but almost unheard-of for a Chancellor.”

Hussein thought the Prime Minister was right to adopt a more sombre, statesman-like tone because he has to deliver bad news such as tougher restrictions on people’s everyday lives.

“While the Government has attracted criticism of its communication strategy and the pace of measures being introduced, I do think the near daily optics of ‘Boris and the Boffins’, with the PM flanked by, and showing deference to, the experts has been reassuring.”

Pagefield chief executive Oliver Foster agreed that the Chancellor’s performances had filled him with confidence.

“Repeatedly billed by the commentariat as a 'rising star', there was always a risk that Rishi Sunak would fail to shine when put in front of a podium," he said. "As it turns out, the new Chancellor is radiating as brightly as the early spring sunshine we're all grateful for right now.”

Foster thought Sunak had already proved that he was able to answer difficult questions from Lobby journalists.

“If the Government has any sense, spokespeople like Sunak who are able to communicate complex ideas concisely ought to become an increasingly familiar presence in living rooms across the country,” he added. 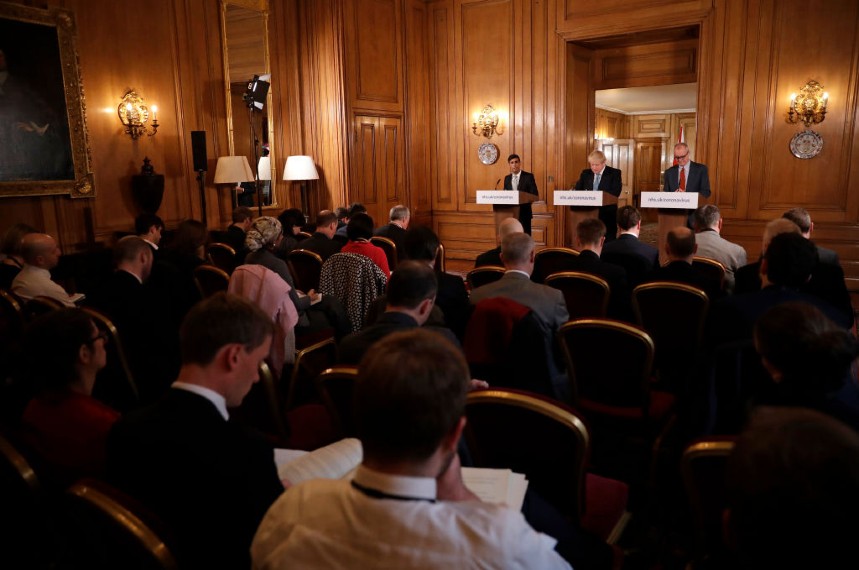 Martha Dalton, co-founder and managing director of strategy and comms agency Lodestone, argued that Sunak’s job has been easier than the Prime Minister's, although the latter's tone has often left a lot to be desired.

“Content dictates the success of comms more than any other factor – by virtue of being able to announce a lot of policy, most of which is welcome and a relief to many people and businesses, the Chancellor has an advantage.

Dalton argued that the Prime Minister has looked shifty, uncertain and reluctant, which are not helpful attributes for crisis comms.

"The Prime Minister’s evident discomfort in delivering anything other than good news has not helped. Sunak’s natural style lends itself to a more empathetic tone that is cutting through.”

"Calming the nerves of investors in the face of a global sell-off also requires a sense of timeliness, urgency and clarity that hasn't been consistent across the Government's communications with the public."

This was evident in the Prime Minister's decision to send the health secretary out in front of journalists less than 24 hours after putting the country on lockdown.

"Given that the successful navigation of this crisis rests in large part on the Prime Minister's ability to gain and sustain the trust of the public, that was a baffling decision," Robertson added.

Chair of Women in Public Affairs Laura Sainsbury asked: “How much of a bearing do our school days have on us?

“Looking at the current Prime Minister and Chancellor, it's all too easy to suggest: quite a lot. What you have here is a case of both the Head Boy and the class clown in the room. Which way round? I think you know.

“Johnson, famously, has always relied on his charm and humour as a modus operandi, getting away with naughtiness with a quip and a wink. It is a style that took him all the way to 10 Downing Street. Sunak, on the other hand, was head boy.”

Sainsbury said the comparison was even more stark as the pair stood side-by-side in briefings, where the PM's approach has often fallen short of the serious response needed.

"Sunak, on the other hand, is proficient, informative – even boring. The consummate head boy, you might say. Their school days are, of course, far behind them, but in terms of the way they communicate these two seem firmly rooted in their days at Eton and Winchester."

Chris Gilmour, director at Beattie Communications, said: "There’s a freshness with Rishi Sunak you don’t get from Boris Johnson."

However, he said the Government was doing a good job at putting policies together to tackle the crisis as best it could under challenging cirucmstances.

"There's an element of goodwill from the public at the moment, and we also don't know what the Chancellor's weaknesses are yet. But he's been a great asset so far."