The COVID-19 pandemic has plunged the world into a crisis never seen before that is crying out for strong leadership epitomized by effective and authentic communication.

The U.S. is leading in terms of global figures for the highest number of people infected with coronavirus for the first time. Cases have been confirmed in all 50 states.

Yesterday’s Labor Department release showed 3.3 million people registered for unemployment last week, by far the highest number since figures started to be collected in 1967. The previous record was 695,000 in 1982.

In the U.K., the heir to the throne, Prince Charles, Prime Minister Boris Johnson and health minister Matt Hancock are among the high-profile figures who have been tested positive for the virus.

In hot-spot areas including New York, hospitals are already reaching capacity in terms of beds, equipment and medical personnel. The Javits Center near the West Side Highway is among facilities being repurposed into temporary hospitals in preparation for a sharp increase in COVID-19 cases.

In parts of the world, patients over a certain age are essentially being jettisoned and left to fend for themselves because there simply aren’t enough resources to treat everyone and health professionals are having to make the ultimate decision about who to prioritize.

In this environment, we need leaders who are going to act calmly, swiftly and decisively. And we need leaders who can communicate authentically in a clear, factual, concise manner to reassure and relay key messages. Empathy is more important than charisma in this context.

Sometimes, surprising individuals emerge as leaders. And those people can come from politics, medicine, business, entertainment and beyond.

New York State Governor Andrew Cuomo was perceived in many quarters as neither particularly likeable nor well-liked, but he has certainly stepped up during the COVID-19 crisis. To the point that his daily briefings have become a must-watch for everyone, not only in New York but also beyond.

Dr. Anthony Fauci and Dr. Deborah Birx are the two medical specialists entrusted with the essential task of relaying key health messages to the nation from the White House press briefing room in amongst the rhetoric emerging from others gathered around the lectern.

Fauci has extended that communications role to other activities including an Instagram Live chat with basketball superstar Stephen Curry and an exhortation to other major social media influencers such as Kylie Jenner to use their platforms to help combat misinformation about the virus and promote good practice.

Around 50,000 people joined Curry’s live chat, including former President Barack Obama and pop star Justin Bieber, thus spreading the reach of this information to their extensive followers also. Curry’s main sponsor Under Armour has pledged $2 million to support communities impacted most by COVID-19 via Feeding America and Good Sports Inc.

The likes of Jenner and Curry reach a demographic that don’t typically watch White House press briefings, and they truly demonstrate the power of influencers.

Other businesses are also showing leadership, including Pernod Ricard and our podcast guest this week, Beam Suntory’s global SVP of corporate communications and public affairs Clarkson Hine. Both spirits companies are retooling some of the production in their facilities to manufacture much-needed hand sanitizer.

Many other brands and businesses are also doing their bit, and we continue to profile their great work on PRWeek.

Another inspiring individual who stepped up both before and during this health emergency is Bill Gates. The Microsoft founder, and now joint leader along with his wife of their eponymous Bill & Melinda Gates Foundation, warned of the lack of pandemic preparedness back in 2015, during the Ebola crisis.

“If anything kills over 10 million people in the next few decades, it’s most likely to be a highly infectious virus rather than a war – not missiles, but microbes,” he warned in a TED Talk five years ago.”

He has been reiterating his formula in the past two weeks and hopefully global leaders will take more notice once we’re through the other side of COVID-19.

As Gates explains, effective response requires hundreds of thousands of workers, a hi-tech response system using cell phones and satellite maps, and much quicker turnarounds for vaccines and therapeutics, but all as part of a global health system and pandemic response preparedness system that can be deployed swiftly.

Businesses are also stepping up, with Marriott CEO Arne Sorenson gaining special plaudits for an emotional but truly authentic six-minute video message he sent out to employees, shareholders and customers.

Made more poignant by Sorenson’s recently changed appearance due to cancer treatments, the CEO outlined the devastating implications of the pandemic for Marriott’s business, which he said was worse than the impact of the global financial crisis and 9/11 combined.

The hospitality industry has been among the hardest hit during the pandemic, as travel, tourism and business grind to a halt or retire into WFH mode. The Marriott brand has gone dark in terms of marketing and advertising, it has shortened work weeks and instituted a 60-90 day temporary leave period for many employees.

These are tough measures and the CEO’s voice cracked in the video as he relayed this part of his message. But staffers will note that Sorenson and executive chairman Bill Marriott are foregoing their salaries for the rest of the year and his executive team is taking a 50% pay cut, so at least they are sharing some of the pain.

Good leaders make tough decisions but they do them in ways that are compassionate and empathetic - and they justify those decisions using hard facts.

Compare Sorenson’s messaging to the British hotel group Britannia Hotels, which last week sent out the most egregiously blunt and uncaring letter to workers at its Coylumbridge Aviemore Hotel in the Scottish Highlands.

Titled “Services no longer required,” the letter was apparently slipped under workers’ doors at their onsite accommodation at the hotel, effectively firing and evicting them without notice. 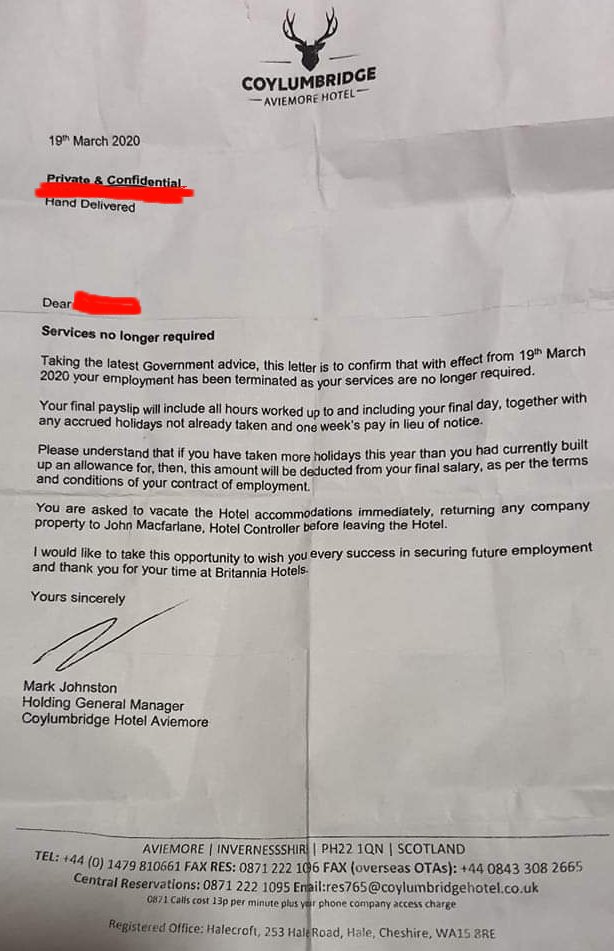 The notice’s staggering lack of empathy was epitomized in the signoff, which said: "You are asked to vacate the Hotel accommodations immediately, returning any company property… before leaving the hotel. I would like to take this opportunity to wish you every success in securing future employment and thank you for your time at Britannia Hotels."

The comparison with Sorenson and Marriott’s approach is stunning and the only good thing to come out of it was that other properties in the region immediately reached out to help the individuals affected and offer them temporary accommodation.

Tough times call for tough measures, but people will remember how brands, companies and institutions acted during this time of crisis. And they will behave accordingly in the future in terms of deciding which brands they interact with, which products they buy, and which companies they decide to work for.

It reminds me of the old World War I recruitment poster from 1915: “What did YOU do in the Great War?”

People will look back on this time and make similar comparisons. Egregious short-term lack of compassion will be mirrored by dire long-term implications for those who don’t do the right thing.

And those that lead through authentic and empathetic communication will be the ones that provide our North Star for the future.