The integrated campaign touched upon every possible engagement channel – from TV to outdoor, experiential to ambient, Facebook to YouTube, and in-store to shopping-centre screens – all sitting under the strategic umbrella of a newsworthy PR campaign.

We were briefed to devise a creative through-the-line launch campaign to drive fame, awareness and consideration for the new Samsung Galaxy S20 phone range.

The campaign needed to highlight the superior design and camera functionality of their new phones with a core focus on 8k video functionality and a new ‘Space Zoom’ function among a core 'Gen Z'/millennnial audience.

The Samsung Galaxy S20+ range boasted a series of unique features including incredible zoom and 8K video capabilities, which would enable our audience to shoot content that would be high enough resolution to show on an IMAX-quality screen.

We knew our core audience was passionate about music and unique experiences – indeed, live concerts were one of the most-shared social experiences within our target demographic

This insight gave rise to our creative platform: a unique concert, where the view (and content shot) would be incredible wherever you were situated, thanks to the Galaxy S20.

The concert would be filmed and mixed live on Galaxy S20 phones and streamed to some of the biggest screens in the UK to demonstrate the 8K video quality of the Galaxy range.

Timings were calibrated to tap into the Brit Awards news agenda – the concert was scheduled to take place three days before the biggest music awards in the British cultural calendar – and we set about creating three unique ‘episodic’ TV ads from the gig, which would premiere during the ITV Brits ad break.

This was perhaps the most ambitious and challenging project in the history of Taylor Herring as a company.

Contracting talent was a challenge. Lewis Capaldi had one day off in his packed tour schedule and could only make himself available for three hours with a single media interview.

We also had a venue to source, multiple camera crews to direct, digital screens to secure, taxis to wrap, co-lab branding to design and so on – the logistics were lengthy in scope and incredibly challenging within the timeframe.

Thus we found ourselves working through the nights to make our three hours with Lewis as productive and newsworthy as humanly possible; including the 30-minute pop-up concert, the TV spots, live streams to multiple digital screens and Samsung stores, social content, interviews and cab wraps.

Our final challenge came on the day of the concert. Saturday is never a great day for breaking news, so we worked hard to stagger our news stories across three days – a strategy that proved invaluable when the tragic news of Caroline Flack’s death, mere hours after the concert, led to concerns over coverage.

The campaign is still in the process of being evaluated. However, in just over a week the campaign achieved more than 300 pieces of coverage, which was exceptionally well messaged, with 95 per cent containing Samsung S20 branded video content and 97 per cent including a Samsung Galaxy S20 product mention.

Other channels were equally impressive: we secured 8.2m video views across the Facebook stream plus Samsung and LC social channels.

Furthermore, the bespoke social content created with Lewis has proved to be among the most engaging in Samsung UK history, with an average view through rate of 26.56 per cent against the 12.49 per cent industry benchmark. Overall, the bespoke content (excluding the concert) generated more than 25m social impressions.

The TV spots were also considered a huge success, with 3.5m views representing a 20 per cent share of TV viewing on the evening of the Brits. 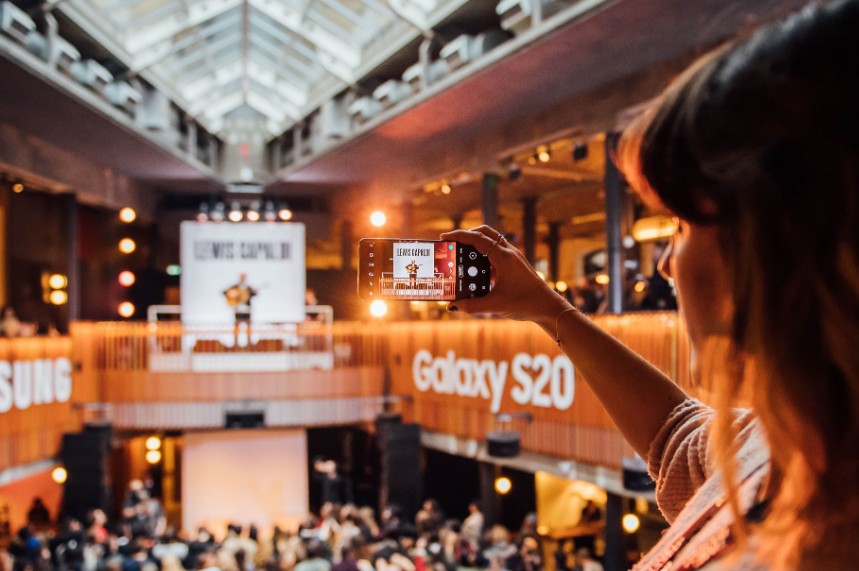 That PR can lead from the front – the power of a great narrative combined with our native agility and rapidly evolving professional skill set means that PR can lead the integrated agency mix in 2020.