A new survey commissioned by the Middle East chapter of Global Women in PR has revealed some striking statistics and glaring insights into the relationship between flexible working, productivity and retention of talent.

Carried out in partnership with Censuswide, the survey heard from more than 200 comms professionals from across the MENA region, and confirmed the growing necessity for employers to address the needs of employees when it comes to their working environment.

A staggering 84 per cent of male and female respondents said they would consider changing jobs if a potential employer offered better flexible working options.

Flexibility also increases return on investment, according to 75 per cent of respondents, whilst two-thirds believe that good talent is lost due to lack of flexible working.

The results echo findings from the 2018 GWPR Annual Index Report. It identified the juggling of family and work commitments as the biggest barrier preventing women from getting into leadership roles, though only 67 per cent of organisations allowed employees to work from home on a regular basis.

Lucy d’Abo, Global Women in PR MENA chair and director of client services, METIA, at H+K Strategies, said: “When we reviewed the survey results, the resounding consensus was that there is clearly a strong business rationale for companies that implement any degree of flexible working.

"Flexible working will likely only grow in importance in future, especially considering trends observed in young Millennials and Generation Z, who are just starting to enter the workforce.

"Put simply, flexible working practices are no longer an optional ‘nice to have’, but as essential as providing employees with laptops or remote access to emails.

"We believe 'generation flex' will ignore companies and opportunities that are strained with rigidity and hampered by an inability to customise.” 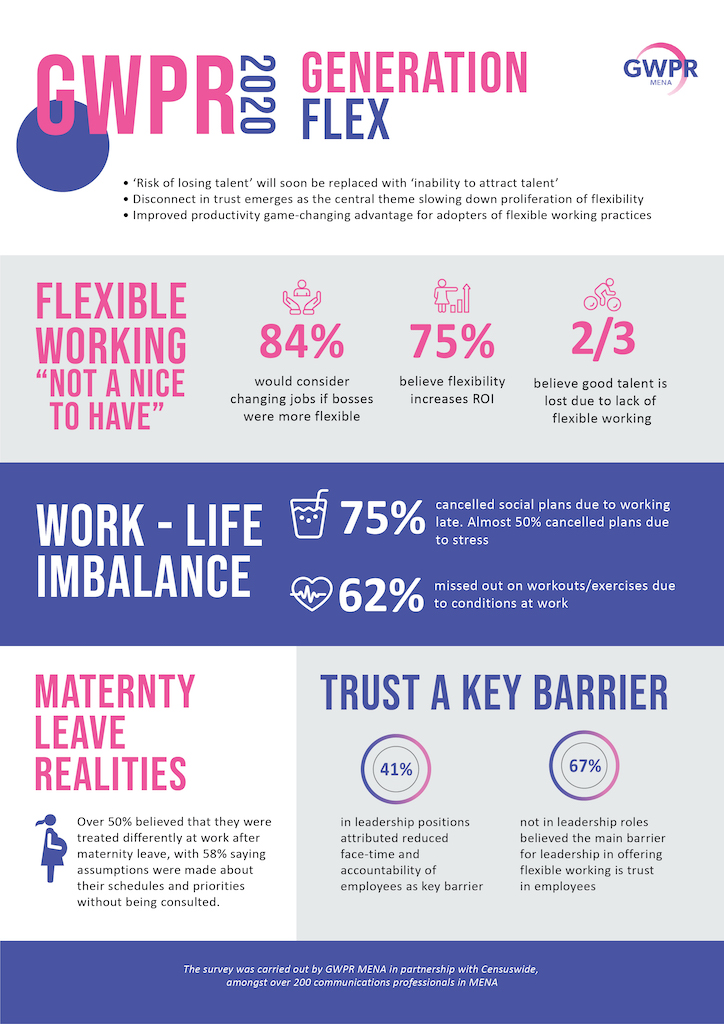 Inflexibility in the workplace, especially in terms of returning after maternity leave, is also causing the loss of senior female talent, and preventing that talent from rising to the top.

The survey revealed that after maternity leave, 39 per cent would go back as full-time employees with no additional benefits, and only one in five would receive flexible working.

Over half believed that they were treated differently at work after maternity leave, with 58 per cent saying assumptions were made about their schedules and priorities without being consulted.

In an environment where many companies have declared an intention to improve mental wellbeing and a healthy work-life balance, the research also revealed a stark revelation that 75 per cent of respondents have had to cancel social plans with partners, friends and family due to working late. Even physical wellbeing was put on the back-burner, with 62 per cent saying they missed an exercise class due to conditions at work. Almost half of respondents cancelled plans due to work stress.

A disconnect in trust appears to be a key problem slowing down the proliferation of flexible working practices. Respondents who are not in leadership roles believed the main barrier for leadership in offering flexible working is trusting employees (67 per cent). Conversely, those in leadership positions attributed only 41 per cent to lack of trust, instead indicating their key barriers as reduced face-to-face time and accountability of employees.

When asked about their current workplace flexibility benefits, 43 per cent of all respondents said they have remote working options, 30 per cent have flexible start and finish times, and 24 per cent receive time in lieu for working overtime.

“The insights we’ve garnered are, in essence, really great conversation-starters around the possibilities and benefits of bringing more flexibility into the workplace,” said d’Abo.

"It’s a chance for both employers and employees to face trust issues, innovate and co-create new solutions that will optimise workflow, quality, and probably also profitability. Our aim at GWPR MENA is to shift the topic of flexibility from a thought process in the background, on to the stage of actively discussing what implementation would look like."

IWD in the Middle East: 'equality is a work in progress'