You would expect Trish Wexler, CCO of the retail arm of JPMorgan Chase, to spend much of her time fielding questions about national economic and political topics.

You might not expect her to focus on more mundane matters such as branch openings, local CSR efforts or coordinating the local media response to stories about monkeys biting bank tellers in El Paso.

That’s not because JPMorgan Chase is not part of the national conversation. After all, it’s the country’s largest bank headed by one of the best-known financial executives in the world: chair and CEO Jamie Dimon.

Dimon and other successful financiers often find themselves on the sharp end of criticism by politicians, including presidential candidate Elizabeth Warren and Rep. Alexandria Ocasio-Cortez (D-NY). The bank is also regularly the focus of non-financial national journalists such as CBS’ Lesley Stahl, who grilled Dimon about his response to Warren in a 60 Minutes episode last fall.

But Wexler is CCO of Chase, the consumer and community banking division of the company, which houses business lines including bank branches, home and auto loans and credit cards.

She responds carefully when asked about public critiques of Dimon, JPMorgan Chase or the financial world in general by Warren et al.

“Larger entities, including governments, have let people down,” explains Wexler. “Part of it is that the private sector and government sector aren’t working together enough to make real change.”

Wexler cites JPMorgan Chase’s involvement in Detroit as an example of how these partnerships should work. In 2014, not long after the city declared bankruptcy, the bank donated cash but also community financial data and business advice to help promote economic growth in the Motor City. Dimon spoke about it in the 60 Minutes piece as well.

Dimon and others will continue to lead on political and social issues because, as Wexler says, “it’s just not in my job remit.”

That means monkey-related incidents are decidedly in her remit, especially when a Chase employee gets bitten, as one did when a customer brought a simian into an El Paso branch claiming it was a service pet.

“We later learned that was not a thing in Texas,” Wexler says. “But it bit one of our assistant branch managers.”

In the wake of resulting media attention, Wexler received a call from her local media rep asking for help.

“A man on the regional team called me and in his drawl said ‘Well Trish, I’ve got a situation here,’” Wexler says, describing the primate problem. “‘The story came out and it’s not entirely accurate.’”

An article described the monkey as wearing a lewd T-shirt when in fact it was wearing a blue T-shirt.

The story also incorrectly reported the teller was bitten on her face, which, had it been true, would have been bad enough. But the reality when it came down to asking for a correction was arguably worse.

“The monkey didn’t bite her on the face,” Wexler says. “It bit her on her breast. And so, after a long conversation with my regional media person, we decided to just let the story be rather than ask for a correction.”

Bank branches are a central location in many communities, she says, and anything can, and often does, happen in them.

“Life happens there,” Wexler says. “Good things happen, people come in for some of the most important moments in their financial lives, like getting a loan for homes or buying a car or saving for retirement. At the same time, interesting things happen that are less predictable.” 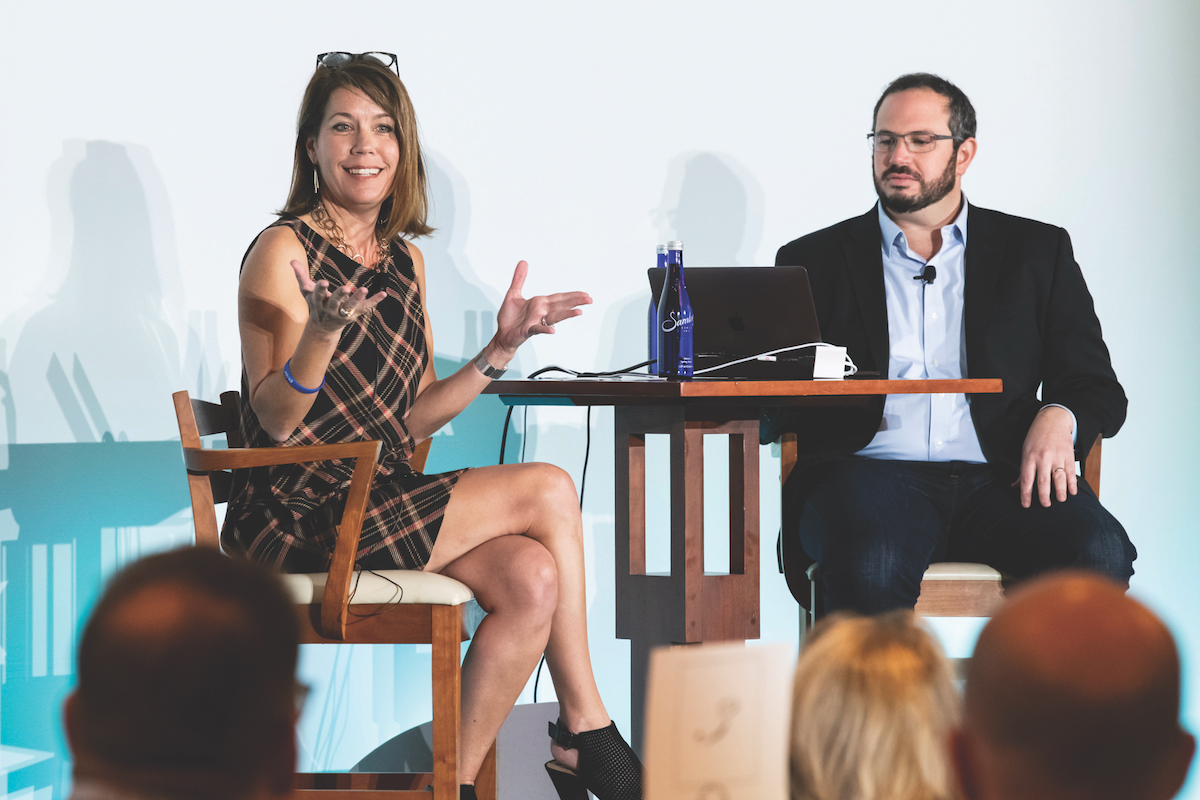 One of the most important areas of focus for CCO Trish Wexler is local media relations, which continues to expand as Chase opens new local branches across the country.

Exception made for masked customer

Another animal-related incident typifies Wexler’s approach to communications at Chase. During a particularly cold winter, local media called her team asking for a comment about a raccoon that had taken shelter in a Chase branch.

“We had some fun with it, emailing each other and discussing the best quote we could give for this situation. We said that, while we don’t ordinarily allow masked customers into our branches, we made an exception given the cold weather. And the New York Post picked that up and ran with it,” Wexler says.

Trust in this country is at an all-time low. We know we have to bring to life the human element and that’s what builds trust.

“That really links back to what I see as our purpose in comms,” she adds. “It is to bring out the human in Chase because that links directly to trust. Trust in this country is at an all-time low, be it government institutions, NGOs or large organizations like ours. We know we have to bring to life the human element and that’s what builds trust.”

That approach has resulted in Chase adopting a very specific voice in its messaging.

“We love contractions,” Wexler explains. “The Chase voice is very plain spoken. You won’t ever see something like ‘Chase believes.’ But we will say ‘We believe.’ When it comes to language, you don’t trust someone when they use a lot of jargon. Comms has a huge role in building trust.”

Local media relations, even when it doesn’t involve animals, is an important area of focus for Wexler, because Chase continues to open new local branches, despite the pervasiveness of online banking.

“That does feel counterintuitive, especially to a reporter who does their banking on their phone,” she says. “Most people really do [accomplish] their transactions online. But for the most important financial moments of their life, they still come to a branch. That’s the difference.”

While 85% of transactions can be processed online, customers still visit banks for major events such as auto or home loans. A million people a day visit Chase branches and the company acquires most of its new accounts in branch.

Hence, the company is on a branch-building spree and aims to be able to serve 93% of the U.S. population via that channel by 2022. “We’re opening a branch a day between now and the end of the year,” Wexler says when interviewed last fall.

A lot of banks are closing branches, but Chase announced in January 2018 it would open 400 over the next couple of years and expand its reach.

“When we go into a new market, such as Washington, DC, my team works closely with the CSR team. We not only announced the new branches, but also how we were going to work with local nonprofits to make financial commitments to help build up the community.”

The focus on local banking also includes new customer service initiatives, which Wexler and her team are tasked with supporting.

“We introduced Chase chats where branch employees host a community event such as Home Buying 101 or leasing versus owning a car,” she says. “We’ve had 10,000 Chase chats so far and local media loves to tell stories about events going on in their community.”

Wexler’s path to leading consumer banking comms at Chase was not straightforward. As a math major, she initially set her sights on the insurance industry.

“I was going to work at Prudential in its actuarial department. I changed my major to Japanese and international studies when the Berlin Wall was coming down because I was fascinated with what was going on in the world and frustrated that all I was doing was looking at numbers,” she says.

After a stint teaching English in Japan, Wexler moved back to the U.S. and worked at VPSI Commuter Vanpools.

“Toward the end of my time there I was managing a region, but I was essentially doing public affairs work,” she says, describing the first turn she took toward communications. “I worked in media relations a bit and tried to make the case that vanpools should earn emissions credits as part of the Clean Air Act.”

From there, it was a short move for Wexler to the then independent public affairs firm Powell Tate.

“It was pretty small when I was there and they pulled together folks out of the White House press and people from the Hill with deep Washington experience. I was one of the kids on the team who would read the papers in the morning, cut out articles and paste them to a piece of paper then fax them out to clients.”

Wexler ran her own firm for a few years before becoming an SVP at Vox Global.

“It was great exposure. One day I got a phone call from Kristin Lemkau [her manager until December] and she said, ‘You’re coming to work for me and you’re going to move your family to New York.’ I kind of laughed. But here I am.”

Trish Wexler is CCO of Chase, the retail arm of JPMorgan Chase, which encompasses all consumer and community banking activities. It’s the largest of the four businesses inside the broader company.

Wexler reports to two people. The first is CMO Leslie Gillin, who was just promoted to the role in late January. Gillin, in turn, reports to Gordon Smith, co-president and COO of JPMorgan Chase and CEO of consumer and community banking.

She also reports to Joe Evangelisti, CCO at JPMorgan Chase. He reports directly to chairman and CEO Jamie Dimon.

“Take Thasunda Brown Duckett [CEO of Chase Consumer Banking], who runs our consumer bank and all of the branches there,” Wexler says. “I have a team stacked against her, which includes people who do internal communications for all the employees who handle PR, media relations, any sort of crisis that comes up. And the head of that team sits at [Duckett’s] leadership table.”

In addition, there are teams located in 11 key regions responsible for local media relations; according to the Chase media contacts webpage.

Wexler also has an internal comms team that works on large-scale Chase employee events and communicates to employees via the corporate intranet, mobile and other technology.