It’s been another week of campaigns that have struck a chord, some for the right reasons and some that have just missed the swing of sensitivity altogether. And while those cause-led campaigns have definitely wowed, there are also those that have just plain tickled us.

Tesco is the first supermarket to launch a range of plasters for diverse skin tones – and yes, it’s 2020, so it really is about bloody time!

Much like the product packaging, the campaign creative is simple and smart, allowing for the visual of a dark plaster to speak for itself. The product comes in light, medium and dark shades to better ‘represent the nation’, and was developed after a Tesco employee spotted an emotional tweet from a man who had used a dark coloured plaster for the first time.

Coverage has been vast and incredibly positive, but what makes this product launch so brilliant is the contribution from the BAME at Tesco employee advisory network, which had input into the product design, as well as accelerating the launch.

Not just a new plaster, Tesco has contributed to a wider conversation about diversity and race, making us think: why has it taken so long to mainstream launch such a simple product that matters to so many? 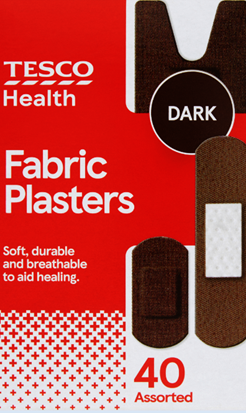 Girls Girls Girls Magazine hit it out of the park with a polarising video addressing the countless contradictions and confusing messages girls receive from childhood. It’s not only impactful, but relatable to every woman. The video touched on various elements and industries, from make-up and food to cultural traditions like marriage and parenthood. The participation of actor Cynthia Nixon, whose enormous contribution to US politics and feminist activism cannot be disputed, gives the ad power and credibility.

‘Be a lady, they said’ has received millions of views and shares since its release on Monday. You’ll be hard-pressed to find a woman who hasn’t received a link to this video from a fellow female. Yet, despite the video’s success, there is very little clarity on the magazine’s purpose behind the video. The title promotes high-end luxury fashion and beauty, which begs the question – would it be seriously willing to sacrifice profits for this cause, or is this simply a marketing campaign with little commitment behind it?

Be a Lady They Said from Paul McLean on Vimeo.

Adidas launched a six-day integrated campaign to promote the launch of its new Predator 20 football boots. The video campaign promoted a ‘Rent-a-Pred’ hotline using WhatsApp. Amateur football teams could use the hotline if a team member dropped out at the last minute and a replacement player would arrive wearing the new Predator 20 boots. The campaign was smart and edgy, as well as a fun way to promote the product.

Unsurprisingly, hands are the most common way to move germs from one place to another and with a world pandemic making headlines by the hour, I’m curious to find out whether KFC has been reading up on the news of late. Perhaps it can take a ‘lick’ of advice from the World Health Organization, and help prevent the spread of infection further by promoting regular hand-washing in its next campaign. Watching this one made me feel more uncomfortable than viewing Burger King’s 'Mouldy Whopper'.

Surrey Police used Pancake Day to find criminals. By teaming up with a crêpe artist, the force featured the faces of wanted criminals on pancakes, which they then shared on social-media channels. Each post was accompanied by a pancake pun including ‘whisk’ away ‘crêpe-tomaniac’. Points for creativity, kind of – but it seems a very insensitive way of turning a serious matter into a calendar moment and/or joke, and has the strong potential to offend victims.

Our last #pancake art by "Phillipe De Pan" is of Thomas McKeogh. We are very keen to speak to him, as are a number of other forces and @EnvAgencySE.

If you can help us crepe up on him, give us a call on ??101 reference PR/45190063997.#ShroveTuesday#HelpUsWhiskThemAway pic.twitter.com/asgcyK4DhU

Clothing brands including InTheStyle and Boohoo have launched a #BeKind T-shirt campaign in the wake of Caroline Flack's death. InTheStyle T-shirts are printed with “In a world where you can be anything, be kind’ - a quote that Flack posted on her Instagram a few months before her death. Although 100 per cent of proceeds are donated to Samaritans, these T-shirts are mass-produced, with little consideration for sustainability or ethical practice. These companies may not be profiting directly from the T-shirts, but the marketing approach does feel like profiting from Flack's death. Definitely not cool.