The ‘Cheating or Competing’ campaign is prompted by a tougher approach being taken by the authority and comes after a crackdown against illegal cartels – with the CMA issuing more than £43m in fines last year alone.

A photograph of couples having clandestine conversations in a dimly lit pub, with the strapline “It’s your business to know the difference”, is being used as the main campaign image.

Howard Cartlidge, the CMA’s senior director of cartels, said: “The CMA is cracking down on businesses that collude to rip off customers by fixing prices, sharing out markets among themselves or rigging bids.”

He added: “Our message to them is that we know cheating when we see it, even if you don’t. Pleading ignorance is no defence; it’s up to businesses to know what these unfair practices look like and avoid them.”

?? We've launched our new campaign to make sure businesses are competing fairly.

Find out more and make sure you're on the right side of competition law: https://t.co/dNrkwg2bzY pic.twitter.com/nKwCtPzCut

The CMA is particularly concerned about cartel activity in the construction industry, after research indicated that barely one in 20 firms in the sector are familiar with competition law and that a quarter see no problem with discussing bids and agreeing who would get which tenders.

The campaign has been devised by the purpose-driven creative agency 23red. The agency’s past work includes behaviour-changing programmes for clients including Network Rail, NHS Blood and Transplant and Public Health England.

Companies are being targeted via posts on social media sites, as well as radio and digital display advertising. Specialist PR agency Radio Relations is helping to secure broadcast interviews for the campaign.

Around £500,000 is being spent on paid advertising for the campaign, which will run until the end of May.

Wider awareness work will continue throughout the year through partnership working and owned digital channels.

A website has been created to host campaign content, which includes a series of short films with a voiceover and cartoon-like graphics to explain cartel tactics like price fixing, rigging bids and dividing up markets. 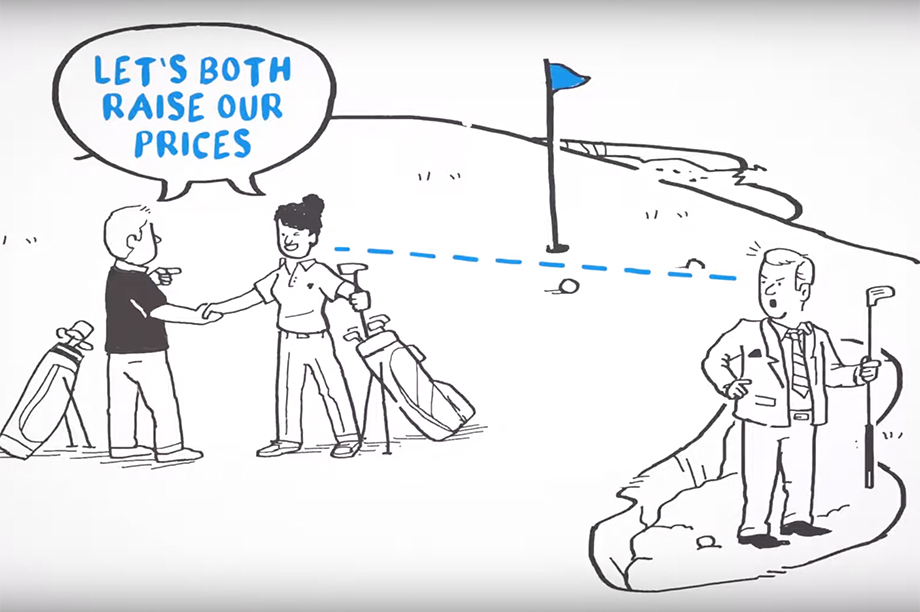 Simple guides to explain what business cartels are and how people can report them have been produced, as well as a number of case studies of recent cases where the CMA has punished transgressors.

These include three concrete companies that were fined £36m for acting as a cartel, five office design companies fined more than £7m for bid rigging, and three estate agents that were handed a fine of more than £600,000 for price fixing.

Warning signs of cartel activity are also among the materials being used in the campaign, and an online quiz has been created to make people more aware of competition laws.

Tristan Cavanagh, creative director at 23red, told PRWeek: “We’re dedicated to working with organisations like the CMA that drive positive behaviour change for societal good. Anti-competitive behaviour is not only illegal but robs customers of genuine choice, drives up prices and stifles innovation.”

He added: “What’s interesting from a creative perspective is that these actions might not look criminal or sinister. They happen in ordinary situations where business rivals meet, both socially and professionally. So, we wanted to shine a light on those situations and make businesses re-evaluate their behaviour – or face the consequences.”

And Ann-Marie Hall, the CMA’s head of campaigns and compliance said: “This campaign’s deterrence messages aim to build a culture of compliance, alongside CMA enforcement powers that ensure those found cheating face the consequences. With our new, hard-hitting imagery and messaging we wanted to show that even a casual chat with a rival could be breaking the law, and a reminder that this comes with serious consequences.”

To assess the impact of the campaign, the CMA will be measuring engagement with social media content and website content, as well as calls to its cartels hotline. 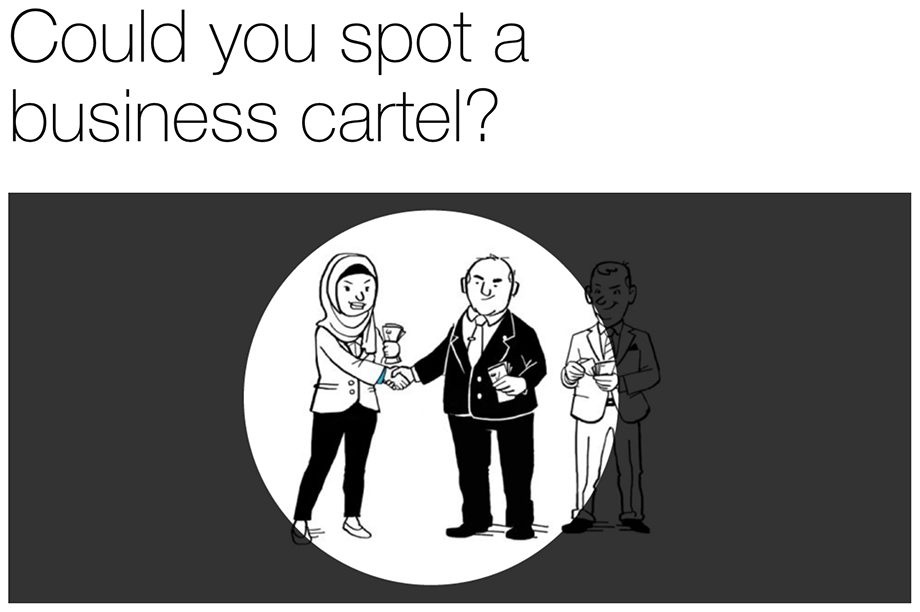 “If you’ve witnessed an illegal business cartel or been involved in one, you can do the right thing by reporting it to us,” the CMA’s campaign website says.

Campaign materials carry the message that people who want to report a cartel, or those breaking the law who want to apply for leniency, should call a cartel hotline.

Penalties for breaking competition law include firms being fined 10% of their annual global turnover, while individuals can face up to five years in prison and a 15-year ban on being a company director. 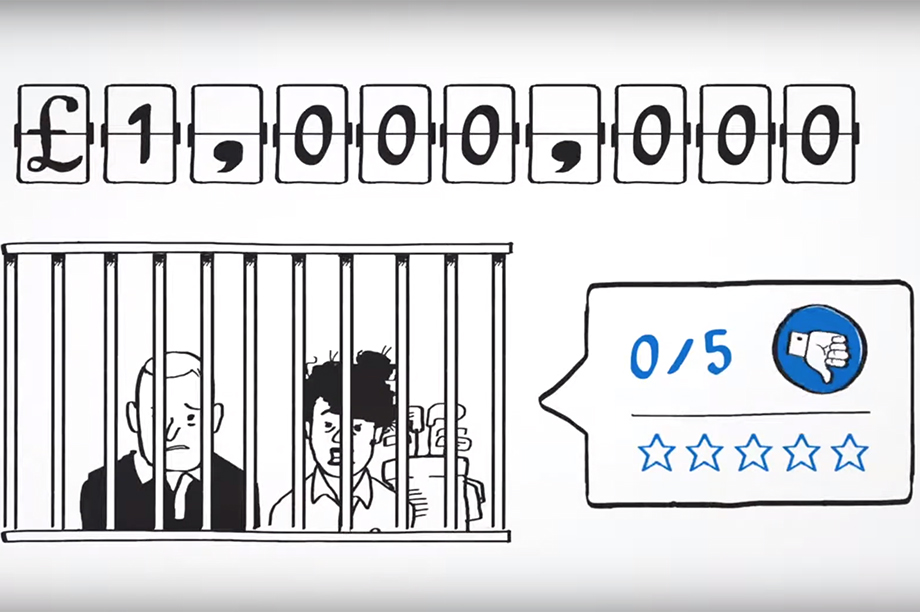 However, the campaign only makes passing reference to a powerful incentive for people to inform on others – that of financial gain – and the campaign materials stop short of disclosing that the CMA offers up to £100,000 for information about cartel activity.

The new campaign is part of an uncompromising stance being taken by the CMA against cartels and a focus on engaging with the public.

In a speech at an event held by the Policy Exchange think-tank yesterday, chief executive of the CMA, Andrea Coscelli, pledged: “Where we see potential breaches of the law, we will investigate and enforce against the perpetrators if proven.”

He added: “We can only secure our legitimacy if we achieve robust enforcement outcomes on what the public believes to be the glaring injustices of the day.”

Coscelli said: “Our task is to earn the trust, confidence and recognition of consumers. To let them know we’re on their side.”

He outlined how the CMA is looking to engage more with consumers, with the regulator aiming to “deepen our understanding of how existing markets are changing, new markets are emerging, and of consumers’ experiences and concerns".

In addition, the CMA will “improve how we choose which problems to take on, and do more to explain these decisions".

It is seeking to be “more visible and vocal", and “will effect change through speaking up publicly as well as through enforcement".

The CMA will stand up to the Government when policies “threaten to harm” consumers and competition, and will continue to “get tougher on mergers and enforcement,” he said.