More time is being spent on administrative tasks and attending meetings (33 per cent) than actually carrying out comms work.

A new survey by LGcomms and project management software firm Panacea Applications has revealed that the majority of comms teams are suffering time pressures to the extent that there is not enough time to do the main work expected of them.

Conducted late last year, it shows that only a third of comms professionals complain they do not have enough time to do their work. 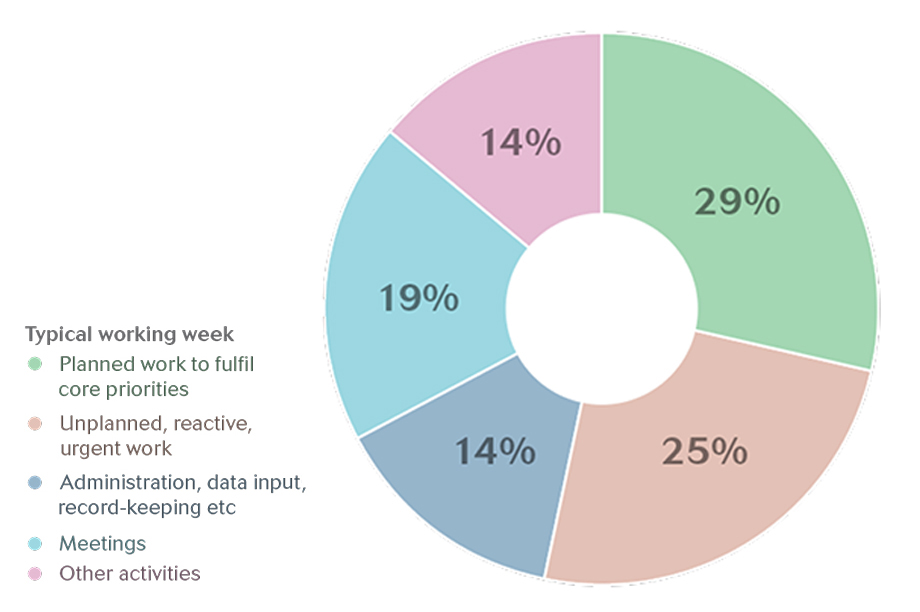 The results of the survey, released this month, also show that more than a quarter of teams have been hit by staffing cuts in the past 12 months, and half are concerned that any further budget cuts would compromise their ability to deliver a high-quality service.

Despite the challenges of working in public sector comms, “morale continues to climb”, according to the survey.

“The resilience of staff is evident by their growing sense of job satisfaction on previous years, no doubt boosted by their confidence that management teams value their work (a feeling rising to 74 per cent from 66 per cent in 2018, and 67 per cent the year before),” it states.

More than 120 comms professionals participated in the survey, the vast majority of whom work in the public sector, while the remaining five per cent are contracted to provide comms services to public-sector organisations.

More pressure is to come, the research suggests. “Councils and other public-sector organisations can be sure that the gaping holes in funding that opened during the last decade will not be plugged immediately, and that improvements in efficiency and productivity remain high on the political agenda,” it says.

“Teams continue to be dogged by reactive work patterns and less than a third of personnel’s time was spent on core priorities.”

The problem is exacerbated by a lack of training and skills gaps within comms teams.

“While most felt that their team possessed the right skills and resources to complete their jobs, 45 per cent perceived a shortfall, with only 50 per cent indicating the availability of a training budget,” the survey says.

In terms of priorities over the coming year, an increased use of digital, online and social media is the most commonly cited, by 64 per cent.

This is closely followed by finding more efficient ways of working (60 per cent) while more than half (54 per cent) cite corporate or strategic planning and 50 per cent say that generating income will be a key priority this year.

The survey also reveals how “the trend towards outsourcing has all but dwindled to naught from its height a decade or so ago.”

The proportion of comms teams having to ‘buy in’ expertise stands at just one per cent.

Commenting on the findings, Simon Jones, outgoing LGcomms president, told PRWeek that the survey “underlines the key challenge that all local government communicators face - the need to be on the front foot through planned, well-thought-through communications. That challenge is as acute today as it ever has been.”

He added: “We need to do more to set the agenda rather than just reacting to it by increasing our influence with leaders as well as managing our time more effectively through sharper prioritisation."