During his tenure as editor of the tabloid Foote, who took up his new role this week, ran the controversial front page ‘The Vow’, in which Labour, Conservative and Liberal Democrat leaders pledged greater powers for Scotland if voters in the 2014 referendum rejected independence for the country. 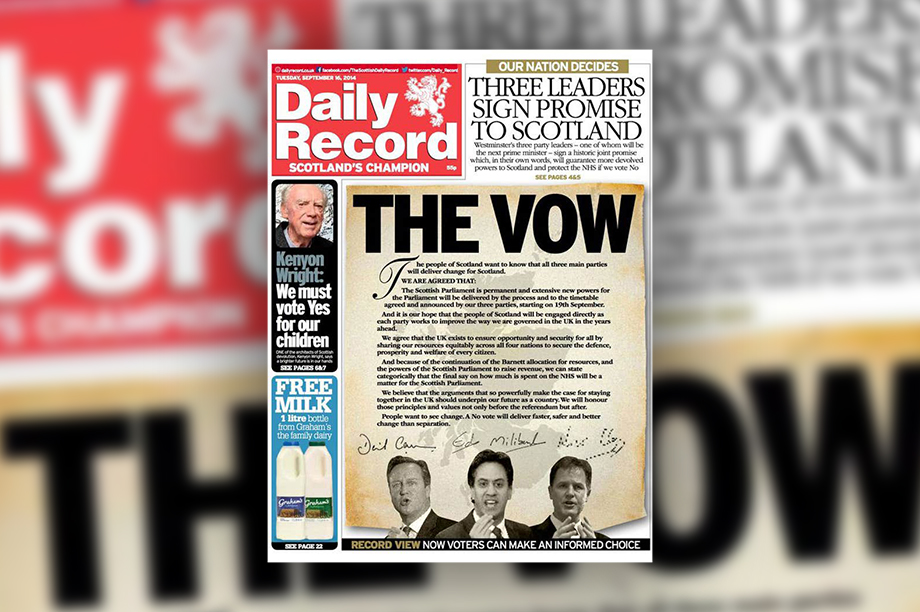 Alex Salmond, former First Minister, claimed the front page was a “decisive” factor in Scotland voting to remain part of the United Kingdom.

Foote later said of the decision to run that lead: “I had a job to do. My job was to represent the views of the readership of the Daily Record. That was what I did to the best of my ability, regardless of my political persuasion.”

Foote spent more than 30 years working as a newspaper journalist and editor. He worked for papers in Dundee and Aberdeen, and at the Glasgow Evening Times before joining the Daily Record in 1991. He was made editor of the paper in 2014.

Foote went on to become group editor at Media Scotland, and was editor-in-chief of the Daily Record and the Sunday Mail before stepping down in March 2018.

Months later, he came out as being in support of Scottish independence.

Writing in the Times in June 2018, he cited Brexit and the government’s “blatant contempt” for devolution among the reasons for his decision.

“I can no longer stand by while a cabal of the privileged deprive our sons and daughters the right to live in 27 European countries because they don't like Johnnie Foreigner encroaching their elite club," he said.

Foote's appointment as the SNP's head of comms and research has divided opinion among the party's supporters. Some have expressed their opposition to the move, being suspicious of Foote’s motives, while others claim he is the best person for the job.

Crazy to let this snake in. Our ‘once in a generation chance’ scuppered by him and Gordon Brown.
He caused more damage than he can ever repair.

Excellent appointment.
Blatantly obvious Independence needs every supporter we can muster AND means previous No voters turning to Yes.
Your own story, Murray, is one we should all applaud and welcome.
Good luck with your crucial task ahead.

The former editor quipped about the age difference between the two men when asked on social media to write a headline about his new job.

His arrival as the SNP's comms chief comes as the Scottish Conservatives' director of comms and strategy, Eddie Barnes, has announced that he is leaving his role.

Barnes, a former political editor of the Scotsman, is credited with heping his party become the second biggest at Holyrood after the last Scottish elections.

Foote follows a well-worn path from senior journalism roles to high-level political comms, but he has begun his job at a challenging stage for the SNP's reputation.

The party is still reeling from the resignation of Cabinet minister Derek MacKay last week amid revelations that the former finance secretary had inundated a 16-year-old boy with hundreds of messages on social media.

Foote will also face the comms challenges presented by next month’s trial of former SNP leader Alex Salmond on a series of sexual and indecent assault charges, as well as the continuing debate over a new independence referendum.

Best wishes, I hope you can inject a sense of urgency and robustness of communications responses, so we immediately start setting the narrative, one that is factual, positive, inclusive and irresistible. You are starting at a new average of 51% support for Indy.

Foote has described himself as “a highly-skilled and creative leader with success in managing people, complex processes and tight budgets in a fiercely competitive and time-sensitive media environment.”

On his LinkedIn profile, he adds: “I like to be accessible to colleagues and stakeholders to foster a strong sense of purpose, build trust and encourage better outcomes through collaboration.”