(Roundtable participants above are listed in order as they appear clockwise from bottom left in the image further below.)

From January 21-24, 3,000-plus global leaders representing governments, corporations, nonprofits, and a variety of cultural, societal, and thought leaders gathered in Davos, Switzerland, for the World Economic Forum (WEF), which turned 50 in 2020.

This year’s theme was "Stakeholders for a Cohesive and Sustainable World." The agenda was put together to, among other things, bring concrete meaning to "stakeholder capitalism." In addition, this year’s gathering saw the launch of a new Davos Manifesto, the first one having been introduced in 1973.

According to WEF founder and executive chairman Klaus Schwab, the new manifesto states that "companies should pay their fair share of taxes, show zero tolerance for corruption, uphold human rights throughout their global supply chains, and advocate for a competitive level playing field."

This theme perfectly aligns with the increased focus brands now place on purpose – an objective that comms teams play a huge role in shaping and facilitating. This was one of many topics covered as PRWeek, in partnership with Edelman and Google, convened a roundtable featuring 11 industry leaders.

Below we share some of the leaders’ foremost thoughts, as well as broader takeaways from the roundtable. 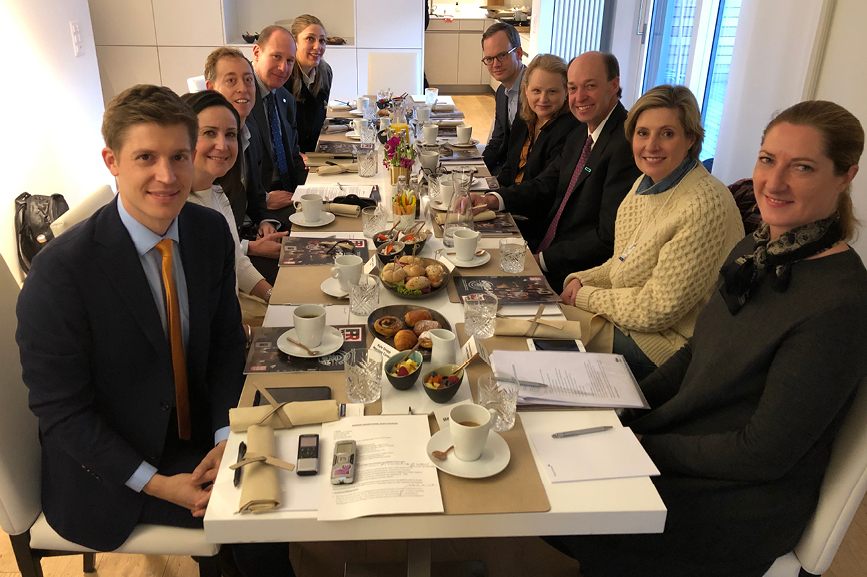 •The value of Davos
Jennifer Lowney, Citi: From a practical perspective, Davos is a very helpful forcing mechanism at the start of each year to get our senior leadership’s heads around what we want to talk about for the next 12 months, what we want to say about some of these big topics.

•The CEO’s role
Justin Blake, Edelman: According to the Edelman Trust Barometer [which was unveiled at Davos], 76% think CEOs should lead on issues, while 92% think their own CEO should be out there on societal issues. Furthermore, in past years here, CEOs were more or less meeting with people such as themselves and not mixing with different types of organizations and leaders. That has completely changed.

•A call for equality
Craig Buchholz, P&G: It’s clear that climate is front and center this year, with lots of momentum coming into Davos. But we’d actually like to see the World Economic Forum be more progressive on gender equality. That continues to be something that plagues it in terms of attendance, but also programming.

•Don’t overreact
Kelly McGinnis, Levi Strauss: Brands have to be very careful not to overreact when there are issues that look as if they’re incredibly divisive, but then you really dig into the data, you realize it’s 5% of the population that’s just well-organized and speaking up. You have to recognize things that don’t have a huge impact on the business.

•Time for action
Jim Jackson, HPE: It’s good to see the discussion on issues such as climate sustainability really moving from talk to action. Most meetings I’ve been in here, people don’t want to hear about strategy. They want to know what we are actually doing to make things better. And it’s crucial to get more common platforms where everybody can align against those so we can really get some scale.

•A united front
Francesca Krist, Credit Suisse: How do you present your company in one voice? You need a good understanding of how your consumer is thinking. Whether something comes from comms or marketing, it comes from the brand. You need a mindset of how it all comes together, rather than "this is my reporting, we’ve got our weekly and that is where I’ll share." You’ve got to get over that.

•Crisis builds collaboration
TJ Crawford, CVS Health: Crisis or major moments within the company is when the marketing-communications relationship is actually at its best. Sometimes it takes those moments to bring those two closer and realize the power of working together.

•Eye on the news
Laura Nelson, Nielsen: This is the only place where media come together to talk about media in a global way. And one of the biggest discussions now is the state of news and whether it should be subsidized by governments or not. The impact of streaming. The future of news is a very big conversation happening now. And the divide between the informed and the uninformed really fuels that.

•The disruptive phase
Fraser Engerman, Johnson Controls: Two, three years ago people were talking about digitalization, AI, and it was probably more rhetoric. This year the rhetoric has shifted to action. We’ve gone from being the disrupted to being the disruptors.

While the betterment of broader society is at the heart of why global leaders convene in Davos for the World Economic Forum each year, roundtable participants devoted much attention to opportunities – in some cases missed opportunities – with employee communications.

The word "evergreen" was used to describe the challenge in reaching the vast majority of the workforce, particularly those not in the corporate offices. And there was some lamenting that comms teams were not doing quite as inspired work on internal engagement as they were on external.

P&G’s Craig Buchholz, however, predicts that there soon might not be any categorized differentiation between internal and external comms. To that end, he notes how his company doesn’t have an internal comms team. Rather, it relies on social channels, particularly Instagram of late, to reach employees. It also focuses heavily on creating content for employees to keep them informed.

To clear up any confusion, though, Buchholz underscored how vital a stakeholder group employees are to P&G. When the company launched its "Toxic Masculinity" campaign in early 2019, employees were kept informed early and often about everything – and they were encouraged to drive the program forward on their own channels.

To a person, each gathered leader enthusiastically recognized the power employees can bring to any brand initiative, particularly ones connected to purpose.

"Employees are a secret weapon," says Nielsen’s Laura Nelson. You need "people who are passionate about engaging them and using that as a power for good."

"We’re counselling our executives to embrace employee activism," notes Kelly McGinnis of Levi Strauss. "They’re telling [the C-suite] that you have permission to weigh in on issues and that they hope you will."

•According to the Edelman Trust Barometer, the majority of people believe capitalism in its current form is doing more harm than good.

•During a Trust Barometer panel lunch at Davos discussing whether business or government should lead on societal issues, Microsoft president Brad Smith said business should play the part of Best Supporting Actor rather than winning the Oscar itself.

•Any brand that truly wishes to lead and be taken seriously on societal issues has to be present at Davos because it is the single-biggest concentration of people who are actually impacting change on a global level.

•Oftentimes it is wise to share news of a campaign with employees first and then invite them to drive, through their own social channels, the assets being created.

•The days of silos need to be over. Smart brands think about marketing and communications as one plus one equals three.

•More and more companies are seeing the wisdom in being agnostic about channels and allowing their messages to be a content and narrative play.

•Less focus needs to be placed upon the letter that comes between the "C" and the "O" (i.e., CMO or CCO) and more around the distinct skills that each person brings to an overall strategy.

•Something often overlooked in conversations about reporting is the comms team’s ability to influence the broader conversations being had by folks who run the company.

•One of the best uses of data is to understand when a crisis is either very limited or contained to one area. This enables a brand to not only target response effectively, but also allows it to avoid spending time and resource fighting unnecessary battles.