We filmed synchronised swimming duo Kate Shortman and Isabelle Thorpe struggling to perform their routine in a pool full of plastic for The Big Bang Fair, the UK’s largest festival of STEM (science, technology, engineering and mathematics) for young people.

The idea took an original approach in drawing attention to the scale of ocean plastic waste while shining a light on the young people using science to find a solution.

We knew that young people cared about the environment and tackling plastic waste. While changes in consumer behaviour will go a long way in tackling plastic, STEM innovations will also form a crucial part of the solution. But the world needs more young people to become the scientists of tomorrow.

We’ve all seen pictures of marine life struggling to swim through plastic. We simply asked the question: "What if we had to swim in plastic?"

We’ve had a few ideas for The Big Bang Fair that just weren’t right and so didn’t make it. But on this particular topic, this was the only idea we put forward, and we’re hugely grateful that our client loved it and let us do it. They helped us to really shape the story so it wasn’t just about making an environmental statement, but was also a way to champion STEM in solving some of the world’s biggest problems.

It took us around six months from pitching the idea to being poolside. Cow was responsible for all parts of the activation, from getting the synchronised swimmers involved, to sourcing the plastic, finding a pool, creating the content and making it famous through the press and social media. We collaborated closely with The Big Bang Fair to find a young person with a memorable plastic-solving STEM invention who could become part of the story.

Surprisingly, getting plastic was the hardest part of the project.

We first tried a plastic recycling centre. But all of its plastic was contaminated and teeming with bacteria. Giving two potential Olympians Legionnaires’ disease wasn’t part of the plan.

So we had to collect and clean all the plastic ourselves. And synchronised swimmers’ pools are big. Really big.

Everyone at Cow chipped in by donating their used plastics, and so did our friends and family.

It took about six months for us to collect enough plastic. During that time the office was a tip, literally, but it was worth it.

And yes, we recycled it all after we were done with it. 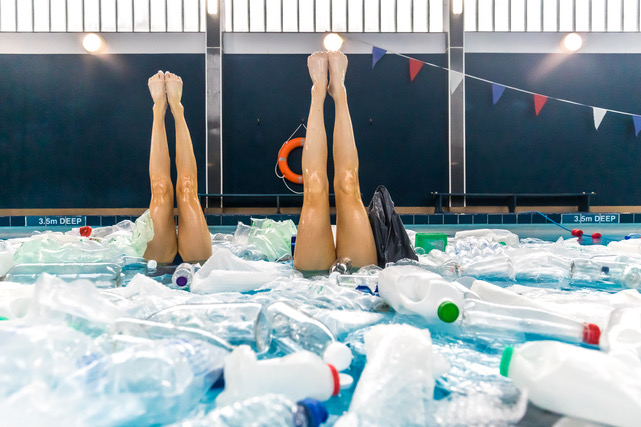 We got about 340 pieces of coverage, with loads of nationals and more than 20m views of our film – which was put out on social media by some of the world’s biggest media titles and publishers. The World Economic Forum even used our content, which bumped up the views by a few more million.

The press was full of praise for the idea. CNN said the synchronised swimmers should "get a gold medal just for this", the Press Association remarked that the idea "sends a powerful message" and BBC Radio 4 had just one word for it: "Amazing."

The public responded similarly, commenting how the idea was "brilliant and beautiful" and "intelligent, inspiring and bloody clever".

When we conducted post-campaign research with 11- to 15-year-olds, 52 per cent said the idea had made them see STEM in a new light and that they would now definitely consider taking STEM subjects at GCSE, A-level and university.

Finally, as a direct result of the idea, Kate and Isabelle were given additional funding to help get them to the 2020 Tokyo Olympics – where they can continue to champion STEM on the biggest sporting stage of all.