A Ryanair campaign that claimed it was Europe’s "lowest-emissions airline" has been banned by the Advertising Standards Authority for being misleading.

The TV, press and radio ads from September 2019 drew multiple complaints, including from a consultant in energy, transport and sustainable development, who believed that by their nature airlines did not have low emissions. They also challenged whether the claims "Europe’s… lowest emissions airline" and "low CO2 emissions" were misleading and could be substantiated. 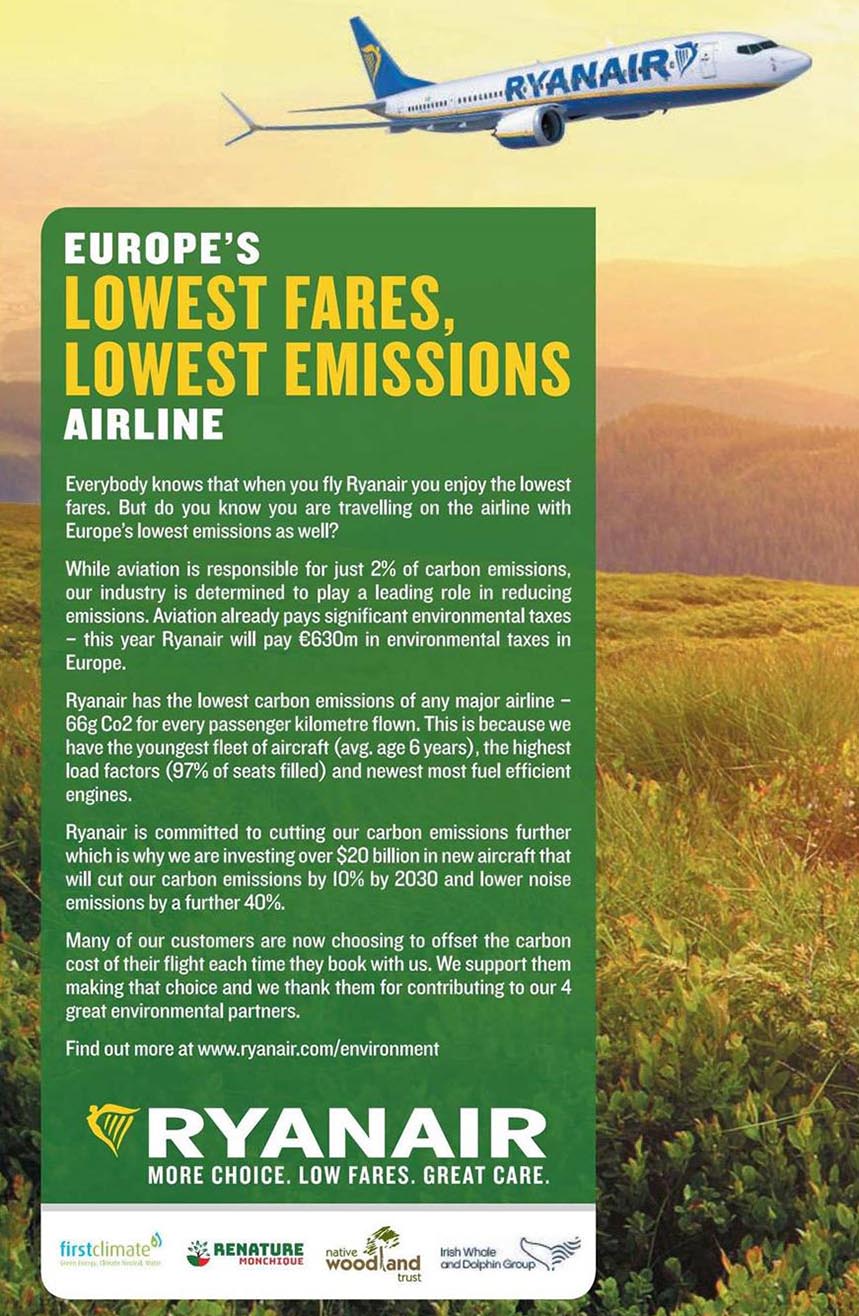 This was followed by TV and radio spots in late September that made similar claims about being "low emissions".

When contacted by the ASA, Ryanair said the press ad clearly explained how their newer and more fuel-efficient planes, direct flight routes, fewer empty seats and higher seats per plane meant that passengers were contributing less in terms of carbon dioxide per person. In the ad, Ryanair said it has the lowest carbon emissions of any major airline – 66g CO2 for every passenger kilometre flown.

Ryanair also said it provided detailed evidence of the claim to Clearcast and Radiocentre, and that although it was the top airline of 27 in terms of total passengers carried (according to independent and official data), it scored only fifth for total CO2 emissions.

However, the ASA concluded that consumers would understand that air travel was commonly associated with high CO2 emissions and that choosing to fly would increase their own carbon footprint regardless of the airline they flew with.

The watchdog said consumers would interpret the ad as saying flying with Ryanair would mean contributing lower CO2 emissions than if they had chosen a rival airline in Europe, rather than low as a measure of their own carbon footprint.

In its judgment, the ASA added: "While we considered the claims in the ads would be understood relatively and while we were satisfied that CO2 per passenger distance was an appropriate method to compare the carbon footprint of passengers on different airlines, we were concerned that the basis of the claims had not been made clear in the ads and that the evidence provided was insufficient to demonstrate that Ryanair was the lowest carbon-emitting airline on the basis of that metric."

The ASA gives specific advice to airline advertisers on its website that "marketers should beware of unintentionally making implied claims" when it comes to advertising how environmentally friendly they may be. It cites easyJet ads from 2007 and 2008, in which the airline claimed to have lower emissions than most other airlines because the ads implied that the planes were more efficient. Because those ads did not explain that the reduced emissions were a result of carrying more passengers, the ASA upheld the complaint.