Cain is front-page news today due to a row that erupted when some members of the lobby were banned from attending a Brexit briefing with David Frost, Boris Johnson’s chief Europe advisor. 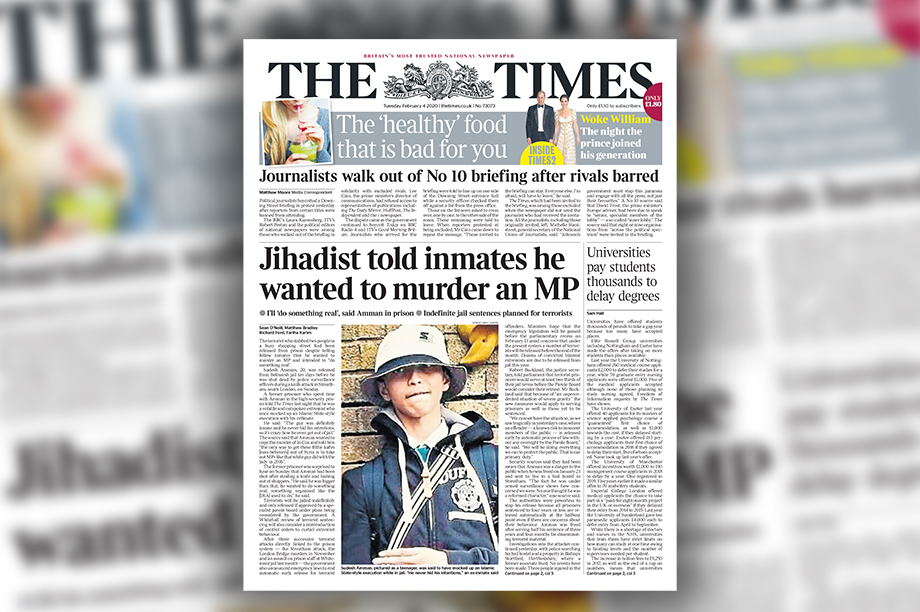 Comms experts have told PRWeek that a balance needs to be struck between the needs of government and the lobby, and that the clash with the media could affect relations between Boris Johnson and Dominic Cummings.

Mark Leftly, head of Powerscourt’s political division and a former Lobby correspondent, commented: "There is something extremely sinister and quite Orwellian about dividing reporters into groups of the favoured and unfavoured," he said.

"This situation has got needlessly out of hand. A comms approach of continually picking fights with the Lobby is simply not sustainable and can only end in an embarrassing u-turn," Leftly added.

Meanwhile, shadow Brexit secretary Sir Keir Starmer is calling on the head of the Civil Service to mount an investigation into the matter.

I have written to the Cabinet Secretary to ask him to investigate this matter. pic.twitter.com/BQxv38xdQs

A large group of political journalists had been allowed into Downing Street yesterday, only to be divided into two groups made to stand on either side of a rug in the entrance hall.

Those on one side, including the BBC’s Laura Kuenssberg and ITV’s Robert Peston (pictured below), were told they would be allowed to attend the briefing. 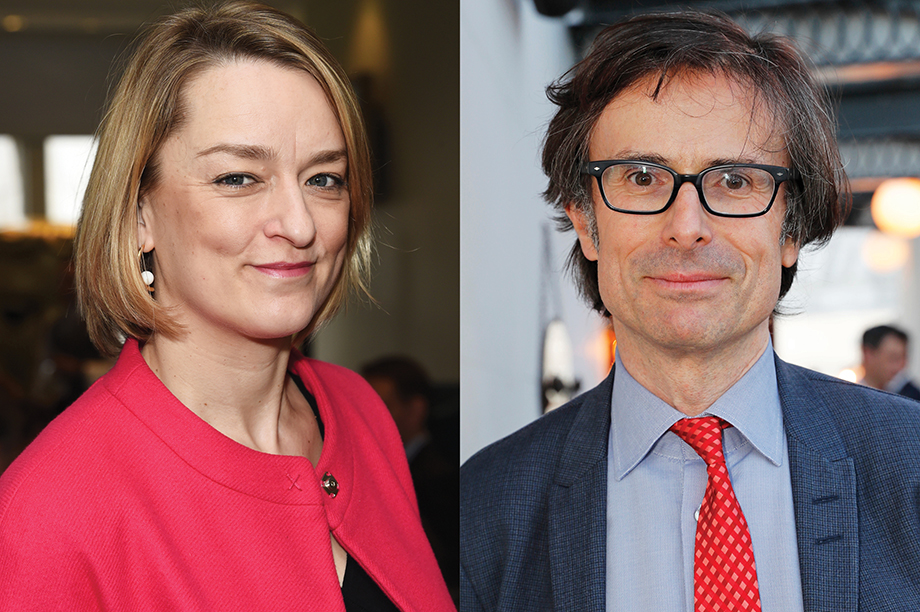 Those on the other side, representing outlets such as the newspaper i, The Independent, Daily Mirror and HuffPost UK, were asked to leave.

Cain said: "Those invited to the briefing can stay. Everyone else, I'm afraid, will have to leave."

When reporters started to protest, he said: "We are welcome to brief whoever we want whenever we want."

As the journalists continued to question his decision, Cain ignored them and stormed off.

The entire group of journalists then staged a mass walkout, with none opting to remain for the briefing.

I can safely say that in 22 years of being a political journalist, I've never experienced a day like today.
No.10 sources now insisting that political editors like myself "are not banned, they are just not invited".https://t.co/tcWGZeHSot


The damaging row features on the front pages of today’s Times, Guardian, and i, with the row also being reported by media outlets from the BBC and Daily Mirror to The Independent and Press Association. 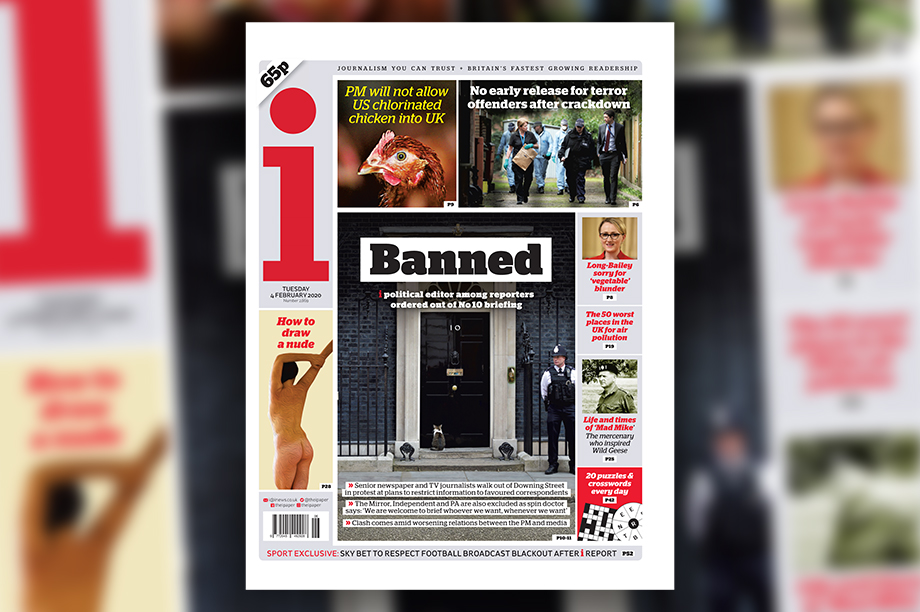 Pippa Crerar, political editor at the Daily Mirror, and one of those barred from the briefing, said: "I felt deeply uncomfortable being left to stand on one side of the room while colleagues' names were read out one by one and they joined the group who were deemed 'acceptable' by No. 10. Sinister and sad."

Veteran political reporter Nigel Morris was another banned from yesterday’s briefing. Writing in the i today, he said: "Alastair Campbell and Bernard Ingham had ferocious reputations for their passionate efforts to portray their political masters in the best possible light. But they would never have attempted the tactics that resulted in extraordinary scenes on the other side of Downing Street's famous black door."

He added: "Today, relations between the Government and the media stand at the worst state I have experienced in 30 years at Westminster."

Dr Sarah Lonsdale, an experienced journalist and senior lecturer at City University’s department of journalism, tweeted yesterday: "Lee Cain must now be fired. This is fascism: excluding journalists who may be critical. We are at a very dangerous juncture."

And shadow culture secretary Tracy Brabin told Parliament: "Press freedom is a cornerstone of our democracy and journalists must be able to hold the Government to account. It is concerning that Boris Johnson seems to be resorting to tactics imported from Donald Trump to hide from scrutiny."

Labour leadership contender Sir Keir Starmer said today: "Johnson’s decision to ban selected media from having access to Civil Service briefings damages democracy. I have written to the Cabinet Secretary to ask him to investigate this matter."

In that letter to Sir Mark Sedwill, Sir Keir describes Cain’s actions as "deeply disturbing" and adds: "I am concerned that they have undermined the Civil Service’s ability to comply with its core values of integrity, objectivity and impartiality."

The walkout by the highly influential lobby marks a low point in relations between the media and the Government, just weeks after it came into power with an 80-seat majority.

Cain recently changed the rules of engagement with the lobby by moving their regular briefings from Parliament to number 9 Downing Street.

And in another break from tradition, the Prime Minister's Brexit day "address to the nation" was filmed by Downing Street, rather than a broadcaster.

Responding to the news of yesterday's walkout by the lobby, a Number 10 source said: "We reserve the right to brief journalists which we choose whenever we wish to, and that is not something abnormal."

Ben Mascall, director at Headland, and a former Downing Street head of strategic communications, told PRWeek: "When I spent the three months to Christmas working with the current Number 10 team, it was immediately clear that what set them apart from the Downing Street I served in under Theresa May was the single-minded removal of anything that stood in the way of their strategic priorities. And you have to say it’s pretty clear which operation has proven more effective."

He added: "On the relationship with the lobby, it’s clearly vital that the media can properly hold the Government to account. Equally, it’s fair to say that the terms and conditions that govern that arrangement have been gradually skewed towards lobby interests over the past 15 years."

Mascall recalled how "enormous amounts of energy were expended in hurriedly settling complex questions to the arbitrary deadlines of twice-daily lobby briefings", adding: "The demands often got in the way of actually governing."

While it is "legitimate to correct that balance", he said, it is also "important that it isn’t overcorrected."

Mascall described yesterday’s walkout as "an emotive issue" and commented: "Selective briefings to media outlets, including those recommended in Civil Service handling plans and then carried out by civil servants, have been an uncontroversial fact of life for years."

Steve Hawkes, former deputy political editor at The Sun, who joined BCW as head of strategic media last year, told PRWeek: "This will pass, but it plays into the idea that Dom Cummings and Lee [Cain] want to throw their weight around and it could hurt Boris Johnson. I mean it's not a new thing – remember Alastair Campbell and Andrew Gilligan – but it’s a distraction just at the exact time the new Government should be enjoying its election victory and rolling out its plans."

He added: "The interesting bit for me is what this does to relations between Cummings and the PM. The word is that Dom isn't getting his way, and is getting frustrated. And Boris Johnson is someone who wants to be liked. He won’t want to be associated with a press operation that lines journalists up against a wall – and definitely not with the headlines that come from it.

"The row also provides Cabinet Ministers with cover for their own briefings. Look at the stories this week about Chancellor Sajid Javid's 'war' against Cummings. The upcoming reshuffle should be fascinating."

Cabinet Office minister Chloe Smith told MPs this afternoon that the Government is "committed to being open in its dealings with the press and to the principles of media freedom." She added: "The events of yesterday were a very good example of this."

Smith claimed that no journalists are barred from "official briefings hosted by the Prime Minister's spokesman" and said: "It is entirely standard practice for the Government to host additional technical specialist briefings, as was the case yesterday."