Miami loves a party, and brands are taking advantage during Super Bowl week with concerts, viewing parties, pop-up experiences and surprise events where brands will be making big plays for share of voice in earned and social media.

By one local PR executive’s count, there are at least 34 concerts from January 30 to February 2, when the San Francisco 49ers and Kansas City Chiefs will vie for the Vince Lombardi Trophy at Hard Rock Stadium.

The concerts are not lacking for star power. The AT&T TV Super Saturday Night concert will star Lady Gaga; the Pepsi Zero Sugar Party will be fronted by Harry Styles; and Budweiser’s three-day takeover of South Beach Hotel, branded BUDX, will include sets from Halsey, Diplo and The Black Eyed Peas.

Brands are hoping attendees will capture and share their experiences on social media.

"With a lot of the different activations on-site, you’re seeing brands take the next step in their immersive experiences. They are asking people to use their Twitter handle or encouraging them to visit Facebook to get the photo they took in the photo booth," says Chris Console, SVP at BCW Sport. "I have been seeing this more and more with every Super Bowl. Social media is helping brands not only engage with people on-site, but to get additional results by having the event live on people’s personal social media platforms and having the brand hashtagged."

Samantha Stark, EVP of communications and PR at 160over90, which is working on events including the Super Bowl Music Fest featuring Guns N’ Roses and Maroon 5, agrees that social media is driving brands’ live-event strategy.

"This will go down as the Super Bowl with the most experiential and Instagrammable moments," she says. "So many of these events have been designed keeping in mind that people want to create and curate their own content for social posts."

The trend will "hit a peak at Super Bowl LIV," Stark says, partially because Miami is known for its sunshine, beaches and diverse visual arts scene. "You’re seeing brands invest in really beautiful backdrops," she adds. "They understand that visuals are the biggest currency for social content."

Brands are also creating unique pop-ups. 160over90 is working with Lowe’s, an NFL sponsor for the first time this season, on its Lowe’s Hometown activation in the Miami Beach Convention Center. It is a themed neighborhood with 32 custom-built dwellings to represent each NFL team. The inspiration: Where would the mascot of each team live? 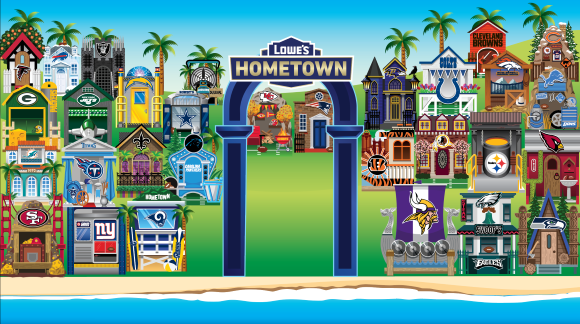 "We made the footprint incredibly visual and Instagrammable with designs inspired by the colors, logos and characteristics of each team, its region and fan traditions," Stark says. "Visitors to each dwelling will be presented with the use of a hashtag for people to use on social media. The activation also ties into the overall campaign, Bring It Home."

The push also includes a partnership with Rebuilding Together and more than 200 volunteers from local organizations to provide critical home repairs for nine families in the historic West Coconut Grove neighborhood that has been damaged by hurricanes.

Other brands are hosting pre- and post-game bashes, as well as viewing parties. For instance, Papa John’s is a key sponsor of Shaq’s Fun House, hosted by basketball legend Shaquille O’Neal, who the chain signed as its brand ambassador last year.

But are there too many events and experiences competing for eyeballs, putting social media past its over-saturation point?

"Brands are trying to win social media with these tremendous experiences, but there is so much spending on them, you have to ask at what extent will this reach a saturation point? When are brands going to start to see less of a return on their investment?" asks Shawn Warmstein, VP and partner at rbb Communications "Because so much is being invested to offer the person at the live event a tremendous experience, and there is so much competition, there are going to be brand winners and losers."

Ads and events: a perfect play

Lee Andrews, VP of corporate affairs for Mars Wrigley in North America, agrees that experiential marketing competition will be intense at the Super Bowl, but he says events can help brands create a storyline, rather than an ad alone.

Next week, Mars Wrigley is planning to release a Super Bowl ad for Snickers on YouTube. A multi-year sponsor of the Super Bowl, it is the chocolate bar’s first Super Bowl commercial in several years, marking the 10th anniversary of its iconic You’re Not You When You’re Hungry campaign. Teasers for the ad include videos with the hashtag #SnickersFixtheWorld featuring people digging at a construction site. It also teased the ad at an event staged at a factory in Waco, Texas, where Mars Wrigley unveiled the world’s largest Snickers bar weighing in at more than 2 metric tons.

Snickers is supporting the ad with events in Miami, including in the warehouse district of Wynwood, where an actual hole is being dug, like in the ad. A number of NFL players will be on hand to reveal what is actually happening, says Andrews. Weber Shandwick is handling PR for the Snickers campaign.

"The Super Bowl has become so much more than the ad and that moment," says Andrews. "It is about creating a story that is as big and culturally relevant as you can, and so we are actually going to be doing a ton of stuff in Miami. We’ve tried to find some interesting, unique experiences to tell our stories that people haven’t seen before and get social buzz and people chatting."

Some events are not meant for mass appeal and consumption. Brands are also putting Super Bowl dollars behind smaller programs to reach targeted stakeholders, including the NFL itself.

"To mix metaphors, the Super Bowl has become the world’s heavyweight champion of experiential marketing," says Mike Valdes-Fauli, president and CEO of Pinta. "It is when brands pull out all the stops in providing a really unique experience, but it can also be to reach luminaries and VIPs all in one place."

Pinta is in the thick of planning events as the Hispanic AOR for the NFL, including a cocktail reception called 100 Años, 100 Momentos, which will celebrate the NFL’s 100th season and the occasions the league has intersected with the Latin community. The Super Bowl has been played 10 times in South Florida, and this year the halftime show is being headlined by superstars Jennifer Lopez and Shakira. Valdes-Fauli says the guest list for 100 Años, 100 Momentos includes luminaries within the Hispanic community.

Another element of Super Bowl LIV marketing will be fun brand storytelling, rooted in imagination and driving earned media. Think of the roasting of Planters mascot Mr. Peanut at age 104, which has resulted in media outlets publishing playful obits. Or the coverage of the Guinness Book of World Records declaring the largest single-size Snickers bar ever made, at more than 2 metric tons.

Experts say these silly brand activations are taking the world’s problems off people’s minds, but that doesn’t mean organizations are turning a blind eye, especially in the host city. The Super Bowl in Miami is a natural fit for CSR and purpose messaging, they say.

"The Super Bowl used to be just about the commercials, but what we’re seeing is its evolution as a storytelling platform. Brands are getting involved with it to tell stories about real-life issues and how they are helping," says Shawn Warmstein, VP and partner at rbb Communications. "That is where PR and impactful storytelling can play a big role."

In Miami, one issue that cannot be ignored is human trafficking. Not only does Florida rank third in most reported human trafficking cases by state, but crowded events like the Super Bowl make for ideal environments for the crime. Ride-hailing brands Uber and Lyft have joined the call from Florida’s attorney general to combat the $150 billion underground industry.

Lyft, which works with rbb Communications on PR, has partnered with Businesses Ending Slavery and Trafficking and the Dressember Foundation to provide training and education for drivers in South Florida on recognizing if a rider might be the victim of human trafficking. Uber has trained more than 100,000 Florida drivers on the issue, and last year it developed educational materials for riders, drivers and Uber Eats delivery partners in the U.S. and Canada.

Don’t be surprised if brands get involved in the discussion about gender equality and diversity, Stark says. The 49ers have Katie Sowers, the first openly gay and female assistant coach in Super Bowl history. The Super Bowl lineup also includes entertainers Demi Lovato performing the national anthem and Jennifer Lopez and Shakira at halftime.

"It is this historic moment for inclusivity, and I see brands representing that too in their activation," says Stark, pointing to NFL sponsor VISA partnering with New York Giants running back Saquon Barkley for a visit to Cheeseburger Baby, a burger joint owned by small business women, to demonstrate contactless payments. "The diversity and inclusive element of this year’s Super Bowl will get lots of headlines."