On 25 November 2019, grime artist and cultural phenomenon Stormzy sent an impassioned tweet and Insta- gram post urging people to register to vote in December’s UK general election. That day, the number of people doing so surged 236 per cent.

Correlation is not causation, of course; but few would deny the impact of the vocal Labour supporter, who has 1.3m Twitter followers, in galvanising swathes of the public. Indeed, one might argue that it is evidence of the impact of a new wave of social- media-savvy influencers on UK politics.

‘Influencer’ is a notoriously tricky term. Stormzy (below), like many other people sometimes categorised under this label, rose to fame through his ‘day job’ and remains predominantly outside the ‘Westminster bubble’. Other influencers are more strongly linked to political movements.

What they have in common is that they fall outside the definition of ‘traditional’ political influencers: politicians, lobbyists or full-time journalists working for established media titles.

This new wave did not exist, at least in its latest form, before the social-media age.

"Twitter and sites such as Instagram have opened the door to a new generation of political influencers – and they’re having more impact than ever," says Steve Hawkes, head of strategic media at Burson Cohn & Wolfe – himself a former ‘traditional’ influencer, having been deputy political editor of The Sun before joining BCW in October.

"You only have to look at Femi from People’s Vote, and the cut-through Rachel Riley has managed on antisemitism, to see this. Added to that, Labour outriders such as Owen Jones are mini-celebrities.

Alice Klein, assistant director of comms at Shelter, spells out the role influencers play for the homelessness charity. "The new wave is really important to us because they have big spheres of influence, often comprised of followers who are particularly engaged and active," she says.

"These are precisely the groups we want to encourage to support our campaigns, which press for changes to policy that will help end homeless- ness. For example, can an influencer retweet a story about Shelter’s work which signposts their followers to take one of our actions, such as signing a petition or contacting their local MP about building more social homes?"

Shelter’s strategy involves building a movement of 500,000 supporters to help it change housing. "While we are trying a variety of new and unique methods to acquire supporters – such as community organisers in London, Manchester, Birmingham and Bristol – we will always need social-media platforms and [their] most popular influencers to share our reactive campaigns widely and quickly."

For WA Communications MD Dominic Church, the "massive" rise in non-traditional influencers is "part and parcel of the decline in trust in politicians and, in part, in journalists".

"They come without baggage of being an established politician or journalist and perhaps can generate more trust than traditional influencers.

"They can be lightning rods for debate and people agree or disagree with them, normally quite vociferously. But whether people agree with them or not, they draw attention to a particular issue and can shift the dial on a national conversation or a public debate." 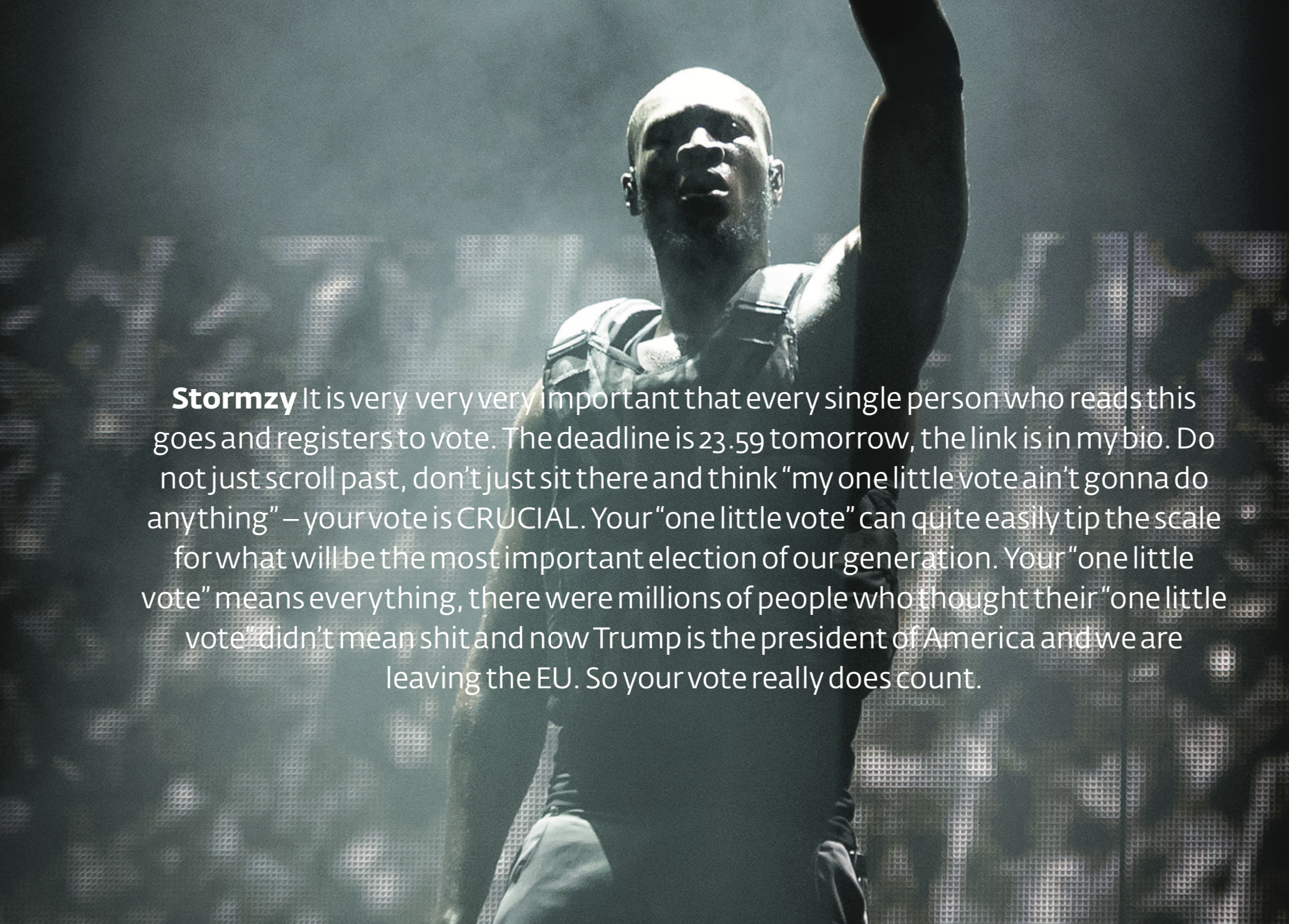 But which members of this new wave are truly influential?

It’s a complex question. Isabella Gornall, managing director of Seahorse Environmental Communications, makes a distinction between the ‘political insider’ influencers – former special advisers, party activists or well-connected journalists, for example – and those famous outside politics who are outspoken on social media.

Of the first category, she highlights former political adviser Ayesha Hazarika, ex-Labour aide Matt Forde and journalist Marina Hyde. As well as being engaging and genuinely funny – Forde and Hazarika are now comedians, while Hyde is a Guardian columnist – something else sets them apart: "Actual insight."

"They’re still speaking to people in that bubble," says Gornall. "I think a lot of people want insight [from political influencers] as well.

"It’s not just someone like a Hugh Grant – who can share stuff, but he’s going on what he’s seeing; he’s not actually hanging around Westminster, he doesn’t know a lot of these people personally. I think that’s what separates them out a bit."

She agrees that ‘political insider’ influencers can have more of an impact advancing certain opinions, whereas ‘celebrity’ influencers typically use their vast reach to popularise these views.

The rise of podcasts adds another dynamic. Gornall highlights The High Low, hosted by Pandora Sykes and Dolly Alderton. Both have backgrounds in fashion and lifestyle journalism, but often discuss political issues on the show.

"When you have a fashion journalist speaking about politics, the influence they have on a young audience who may not be political is quite big," says Gornall.

Then there are those who use creative ideas to make punchy political arguments. Led By Donkeys – the group that plasters quotes and tweets from politicians on billboards to under- mine or ridicule them, often by putting a spotlight on lies and hypocrisy – is a good example.

He also makes a nuanced point about the ‘political insider’.

"Critically, the influencer... has to be accurate and appear to be connected [to] – but not in the pay of – the party they’re supporting. Just as people are cynical about a newspaper’s hidden agenda, you are seeing people question an ‘influencer’s’ credibility. 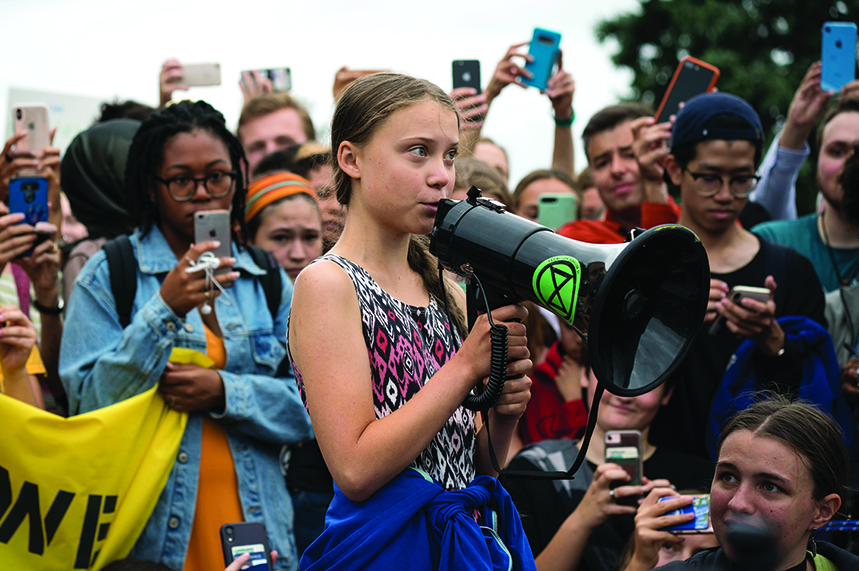 "Look at the Greta Thunberg phenomenon," Hawkes says. "Many are intrigued to know who’s behind her, who’s bankrolling her, but the teenager has changed the world and will go down in history because of her simple message and relentless campaigning."

GK Strategy director Emma Petela says that the most successful new-wave influencers will typically "have a very clear position and voice, and aren't afraid to make unedited or uncompromising statements".

"They are often more extreme than journalists and politicians, as they aren’t subject to the same rules, regulations or editorial control. At a time when society is more critical of the veracity of statements made by politicians, and even academic experts at times, social-media influencers are often looked at to provide scrutiny."

She cites Ash Sarkar. The journalist, academic and activist received widespread coverage for her 2018 appearance on ITV’s Good Morning Britain when she told co-presenter Piers Morgan: "I’m literally a Communist, you idiot." 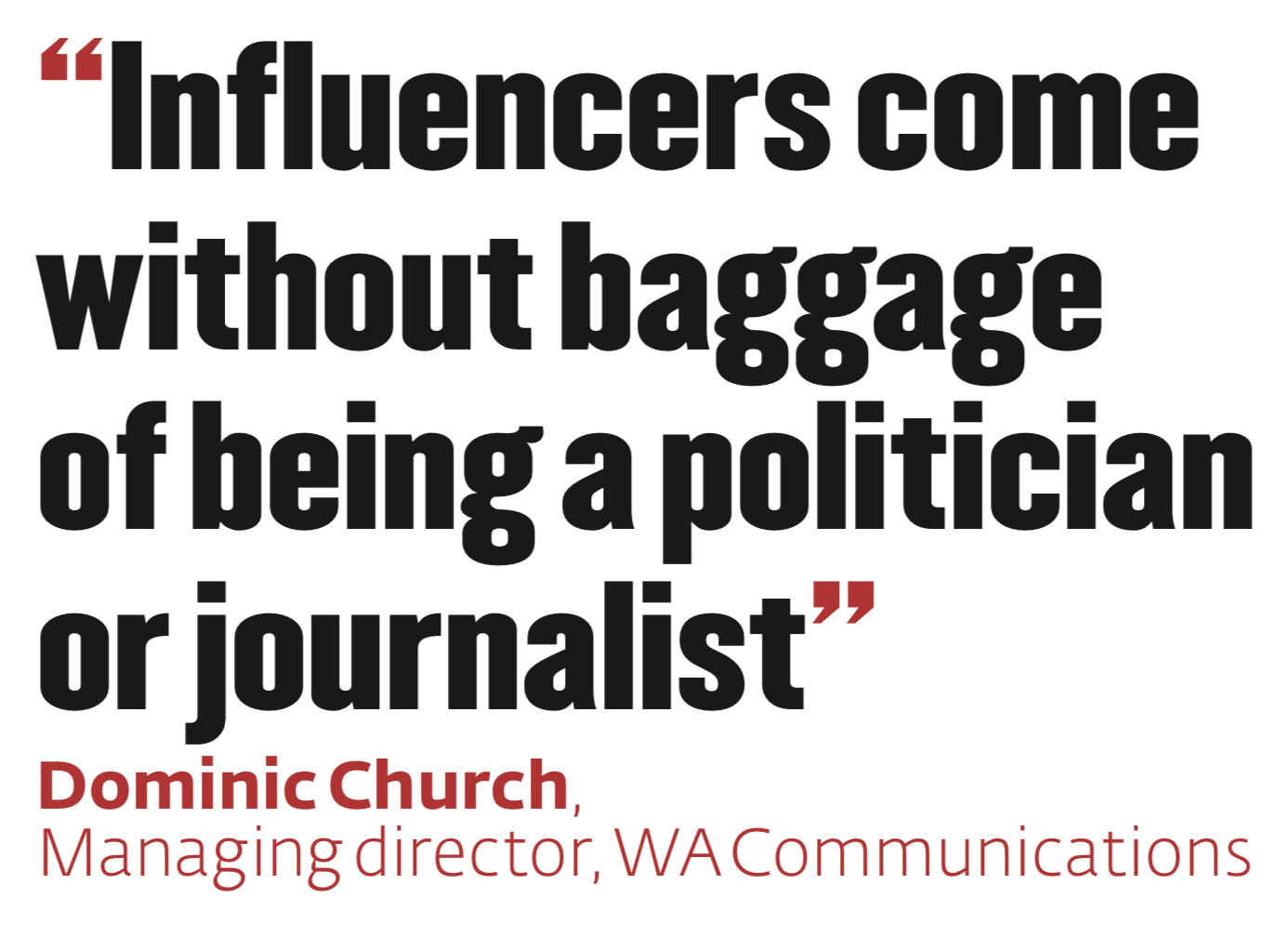 There is an important caveat with this kind of influencer, however.

"They are naturally biased," says Petela. "And it is easy for people who have different views to simply unfollow, meaning that their impact on people who aren’t already sympathetic to their views could be limited."

Arguably this was seen in last month’s general election, when for all their noise on social media, Labour-supporting or anti-Brexit influencers failed to stop a Conservative victory. Whether this shows the limits of ‘new wave’ influencers or of the Labour party’s campaign is up for debate; but, of course, plenty of influencers exist on the right of the political spectrum too.

For Church, influence is greater among those regarded as a specialist in their field. "The influencers that are more targeted in the topic or topics they cover tend to have more impact than generalist commentators," he says.

He gives the example of Femi Oluwole, the 29-year-old anti-Brexit campaigner from the Our Future, Our Choice movement, who is clearly well-versed in his specialist topic and a good communicator.

He gives a hypothetical example of a campaign for subsidies for electric-vehicle charging points. The key decision-maker involved would be the transport minister.

"That one person’s mind needs to be moved in a particular direction for the client’s campaign to be judged successful," he says. "But that person is never going to do all their own research; this powerful individual... always has staff around them.

"Put yourself in the position of one of those staffers; find me examples of successful electric- vehicle charger subsidy programmes. You’d do research and find individuals who have written about that – well, those people are influencers."

One public-affairs professional told PRWeek they would seek to influence special advisers indirectly by influencing the people they follow on Twitter.

Trippenbach cites the individuals who "create", as well as promote, information such as academic research that underpins political decisions. These individuals provide "a vector for changing the way that information travels through society and the culture it shapes", he says. Journalists are "clearly influential", but as "amplifiers".

This seems a far cry from the high-profile social-media stars who are often associated with ‘the i-word’, but it points to the complexity of who has real influence in modern politics.

Trippenbach also alludes to a truism about influencers generally: it’s not just about reach.

"The fact lots of people are listening to me does not necessarily make me influential; that’s fame, not influence. Kylie Jenner can say almost whatever she wants about British politics, in a sense, and her relevance is really low because she’s American and what does she know about the topic,right?

"There would be areas I would trust Kylie Jenner’s opinion but... foreign policy might not be one of them."

Hawkes is similarly cautious about the overall impact impact social-media stars have on politics in the UK. "It’s still far too early to see the effect they are having beyond the ‘bubble’ and on actual voting behaviour," he says. "Many people outside Westminster would struggle to name their own MP, let alone a series of social-media stars. They'd think Owen Jones (below) was a left back for Burnley, not on the hard left of British politics."

And working with the new influencers can create its own challenges.

"My impression is that PR and public affairs professionals are probably a bit more wary of working with non-traditional influencers at the moment," says Church. "If you work with a journalist you can feel pretty confident [they're] going to take information or a briefing off the record, if that's agreed in advance. But there's a question mark over whether a non-traditional influencer would do that... they're not subject to the same rules and structure as a traditional journalist." 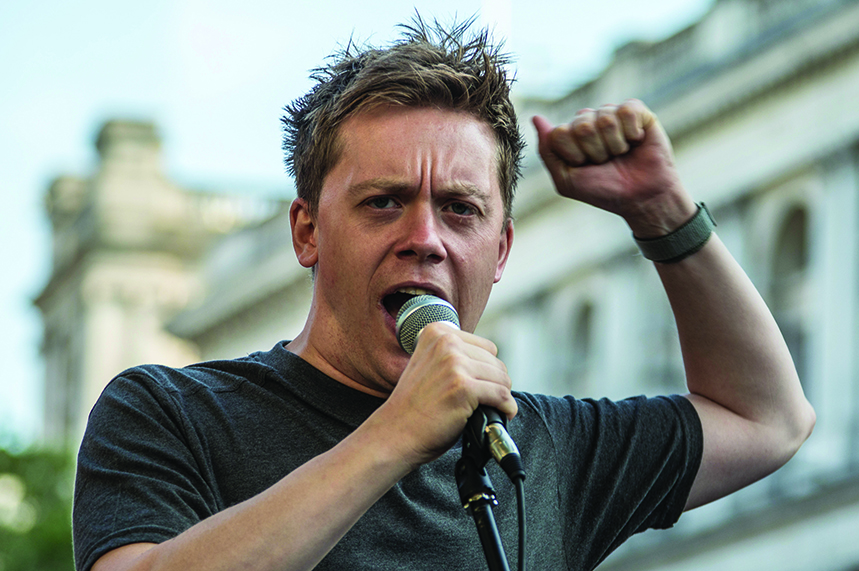 George McGregor, managing partner at Interel, points to a credibility gap in the current climate of distrust. He says the role of social media in the general election came under strain in a way that wasn’t evident in 2015 and 2017.

"Too many fakes, overtly partisan and hostile social-media commentators, and Twitter has become much more abusive and infested with anonymous trolls and conspiracy theory accounts than was the case at previous elections," he says.

"We should be cautious about ‘influential’ social-media accounts with tens of thousands of followers who put out messages that resonate with people on one side of a political argument, but where we don’t know who is behind that account. The most impactful and credible social-media influencers are still those [with] a broader media presence or are mainstream journalists – Owen Jones, Mark Wallace, Tim Shipman, Ash Sakar, etc."

Back to Stormzy. Given his impact on voter registration, how has the Electoral Commission (EC) been working with influencers to this end?

"We haven’t worked with any influencers," is the surprising reply from EC comms officer Billy Proudlock. Instead, it has focused on organisations and media that target demographic groups under-represented on the electoral register, such as student unions and the BBC Asian Network.

"It can be complicated [for an organisation like the EC] working with influencers," says Proudlock. "You have to be sure that they’ve not made any political comments in the past.

"We are an independent, impartial body, so it may be that an influencer has said something at some point that was political, or may go on to say something political, which would not be good for our campaign and the message we’re trying to get across. We want everyone to register to vote, not just people of one political persuasion or another."

For public affairs and comms pros, the new influencers represent a challenge as much as an opportunity.