At the end of 2018, a partnership between Deliveroo and Missing People UK put faces of missing people on rider backpacks across the country. It was the first time Deliveroo had used its backpacks for more than just delish takeaway.

The insight was that Deliveroo riders were fast becoming as famous on our streets as the postman, DPD and milk bottles. If we were to turn that frequency into a creative mechanic for good, what would it be? Part of Talker Tailor's brief is to find ways to highlight riders as the heroes behind every single order. Thinking of heroes more broadly, in a She-Ra/Yellow Power Ranger way: they all deliver hope. We connected the dots to create our idea.

We almost didn't present this idea. It was the last idea in our deck and probably became our most famous work together to date. I also see it as the gateway to us doing even more ambitious creative for the brand, including our first ever ATL ad in 2019.

In the initial meeting with Missing People UK, money was never mentioned. Everything was driven by how Deliveroo could genuinely make a difference to the charity.

The relationship went much deeper than initially anticipated. For the first time ever, Deliveroo ran a dedicated restaurant on the app for customer donations. Food and drink were delivered to Missing People UK volunteers over Christmas, and riders were given access directly to the Missing People UK Text Alert Service.

There were a number of stakeholders involved: the families, the charity, our client, the police and media. It was like running an inter-agency group, but without any other agencies. We kept everything tight to preserve the creative simplicity and to respect sensitivities.

From then on we met with the charity bi-monthly to work towards launch. 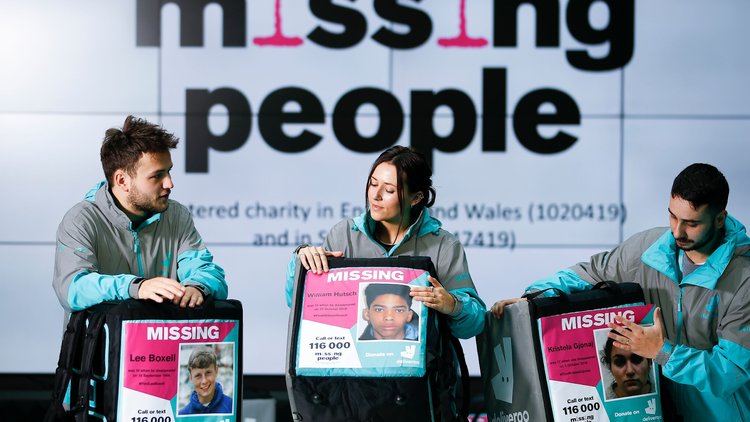 The food-delivery sector is incredibly competitive and this idea felt like an elevation of the debate.

The biggest challenge was ensuring that it wasn't seen as a commercial endeavour or a 'stunt'. Since launch, the Missing People UK partnership has been rolled out across several markets around the world and is returning in 2020 bigger and better.

Logistics would also prove a challenge. When a person is found, it is imperative that their image be removed from all campaign materials as quickly as possible, so we had to develop a framework to take the posters down and replace them overnight. At times it was scrappy, but it was our first year and perhaps our ambition slightly outweighed our bench strength; but our client is tenacious, so almost immediately we had more team on the ground, going over and above to make the campaign a huge success.

Of the 17 appeals featured in the campaign, five people were found. It was important that people saw and shared the faces of the missing people – and the team landed over 550 pieces of positive, branded coverage (50 were national), including a large portion of broadcast (224 pieces).

As a consistently innovating and expanding business it's hard to measure impact on hard orders, but as soon as the first person was found, we all quickly realised we had created something way bigger than a 'business' result: something that was going to change the world for some people. That might sound a bit 'reality-TV winner speech', but there was an energy in our office and around the work that took on a life of its own. Magic.

Importantly, it was and is considered one of Deliveroo's most impactful campaigns to date, with 100 per cent positive sentiment on social.

The charity partner benefitted from the campaign, with more than £16,000 raised by the public in just 31 days; a 2,000 per cent year-on-year increase in sign-ups to the Missing People UK text alert service; and an 18 per cent increase in web traffic.