At the time he had been campaigning to stop the UK from selling arms to Saudi Arabia and was interested in the role EU laws could play. 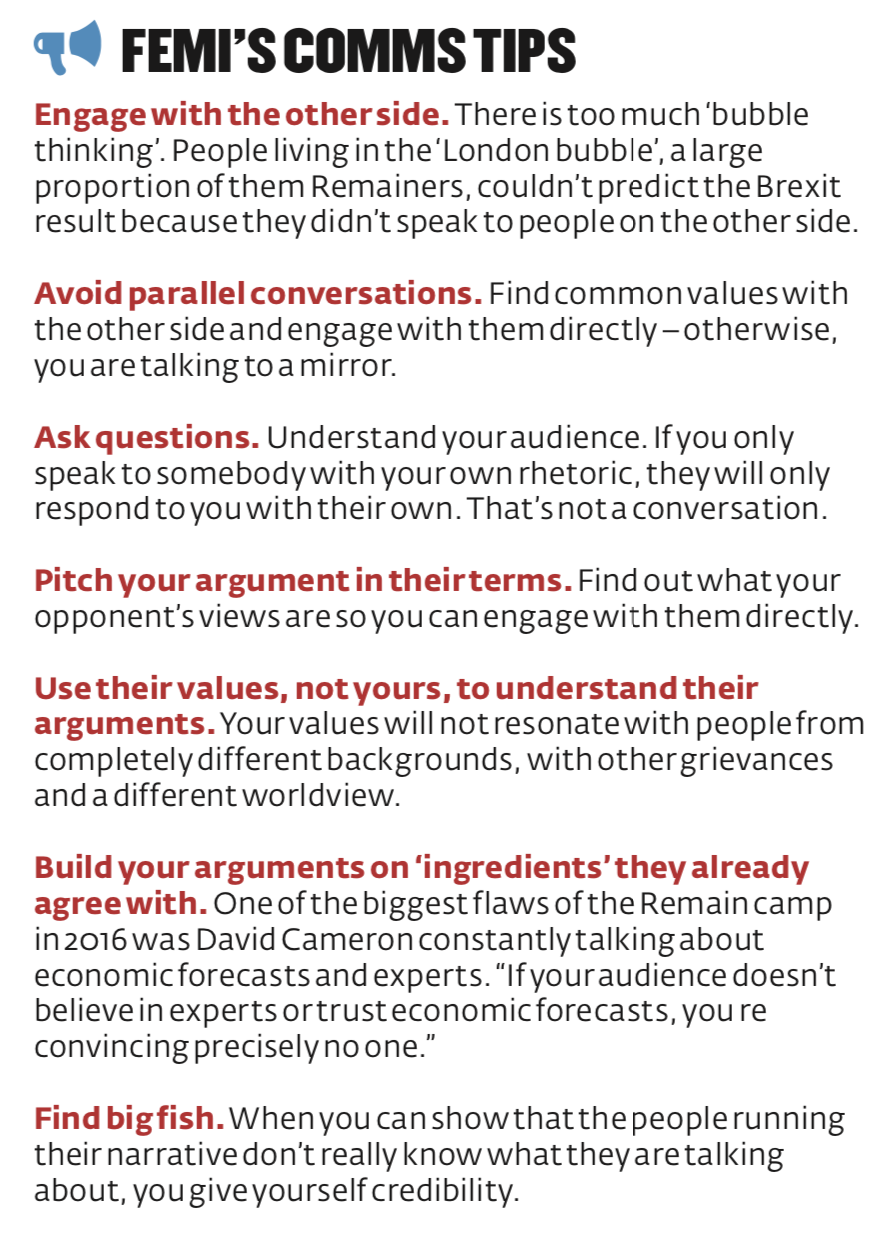 "I saw the EU as a protection of our moral integrity as a country, so from my perspective I was already involved in what I considered to be a battle for the soul of this country, before I had even heard of the word Brexit," Oluwole said at the inaugural BME PR Pros conference.

In the wake of the UK’s narrow referendum decision to leave the EU, Oluwole became alarmed by how proponents of Brexit – in particular Farage – were using issues such as immigration and sovereignty, with racist overtones, to divide the country.

Oluwole’s campaigning efforts and masterful use of social media began to gain traction.

When he took up the cause, he noticed the Brexit debate had been missing facts, the effective communication of them, and empathy towards the other side – particularly towards Leave voters.

The rhetoric between Remainers and Leavers was often spiteful, polarised and regularly descended to shouting at each other, rather than having a conversation.

To overcome this paralysis, Oluwole adopted a communications approach that starts out by finding the points of intersection in the Brexit debate, seeking common ground and then contesting an argument by using facts in a way the other side can relate to.

"Brexit is largely a battle between economics and sovereignty," he explained. "You have one side screaming: ‘Take back control of our laws’, and the other side screaming: ‘This will make us economically poorer’  nobody was talking to each other. 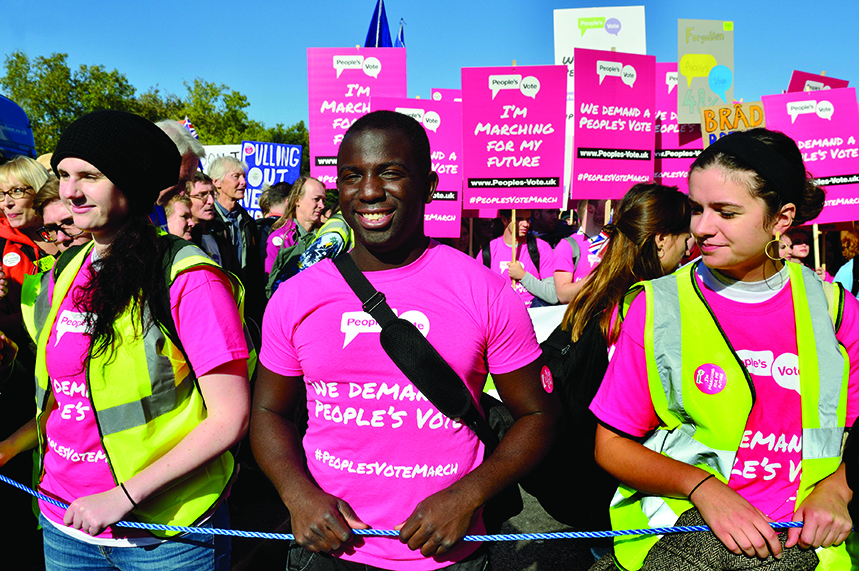 "You have to avoid parallel conversations, where one side is saying one thing, another side is saying another, and [they] never interact because they are not talking about the same thing."

There is a concrete link between the ‘sovereignty’ and ‘economics’ arguments, but what had been lacking was a way to connect the two. 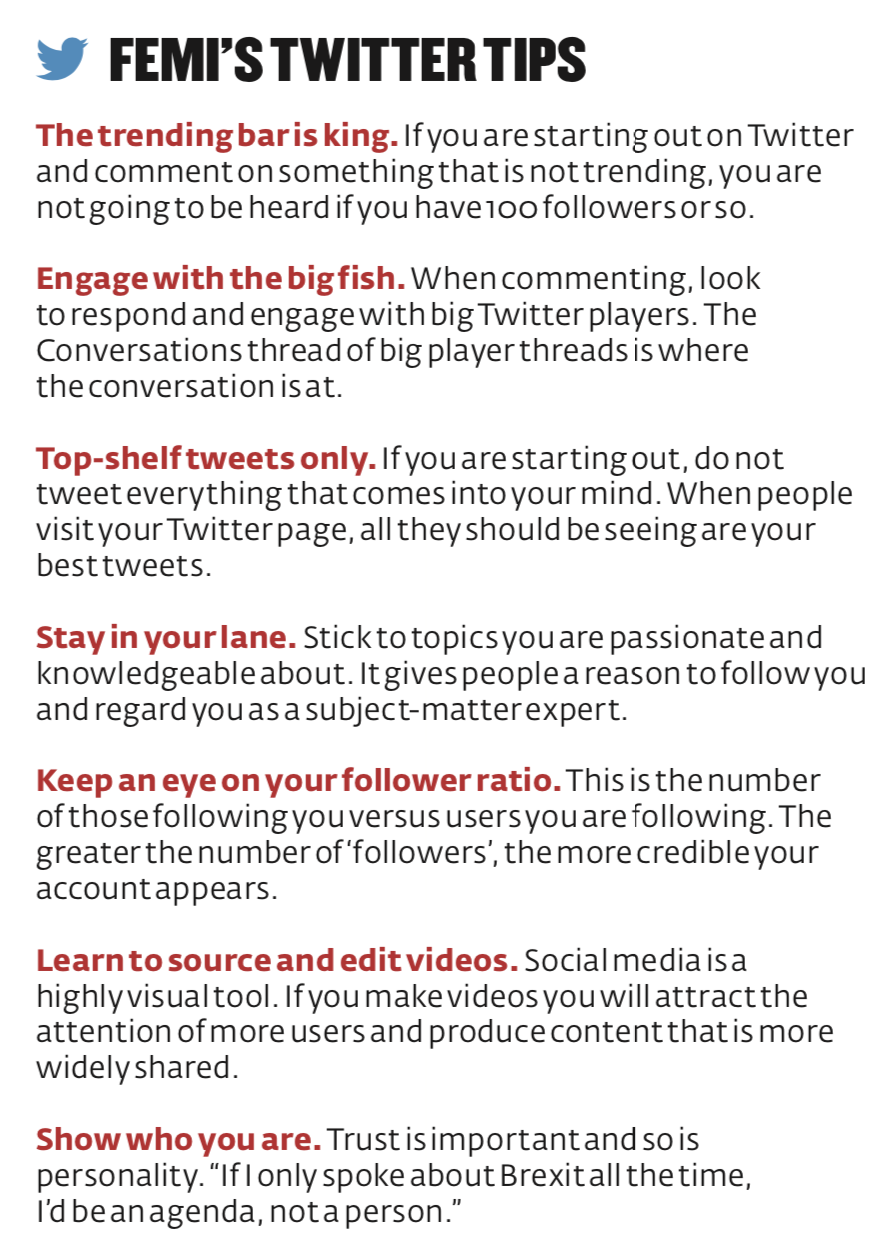 Oluwole found an example that neatly serves this purpose: beer.

As he explains it: if the EU didn’t exist and each of the 28 member states had to make up their own laws on the sale of beer, a brewing company would need to manufacture, package and market its product in 28 different ways to comply with 28 different sets of national regulations. Added to this are the costs of checking compliance at each border.

The European single market’s one set of laws and frictionless borders mean the cost of producing, distributing and buying beer is lower. This means cheaper beer and more money for people to spend.

Relating to Brexiteers, asking questions in order to understand their grievances and displaying empathy have enabled Oluwole to communicate effectively, and often elevated his public profile as a ‘voice of reason’.

Another subtle tactic he uses is always wearing T-shirts, because people are "sick of experts in suits" driving the Brexit debate.

Oluwole’s video posts and media appearances often go viral on social media and he is frequently embraced (and sometimes heckled) at marches.

Testament to Oluwole’s success is that his @Femi_Sorry Twitter account – now verified – has grown from having 20 followers to more than 243,000 in just three years.

Femi's battle for the 'soul and future' of Britain