Greenpeace's latest campaign uses an animated family of turtles to highlight how human activity is destroying the very habitats sea animals rely upon to survive.

'Turtle Journey' tells the story of a turtle family migrating home through an ocean that is under increasing pressure from climate change, plastic pollution, oil drilling and overfishing.

As the family ride home in their shell 'car', the trip turns into a nightmare. Starfish covered in oil and other struggling sea creatures begin appearing along the migratory route, before the turtles get home to find their neighbourhood abandoned. A machine then crushes their home, killing the turtle mum.

Characters in the film are voiced by Oscar-winners Colman and Mirren, along with Stranger Things’ Harbour, Game of Thrones’ Bella Ramsey, Downton Abbey’s Jim Carter and comedian Ahir Shah.

Mirren said: "During my lifetime, I've seen nature being destroyed on an unimaginable scale by human activity. I'm saddened that our generation will leave to future generations a damaged planet, which has already lost so much of the biodiversity that makes it special."

She added: "We can't bring back what we've already lost, but we can protect what we still have. I hope this film will help to make more people realise the ocean is worth protecting, and inspires us to act before it's too late."

Louisa Casson, oceans campaigner at Greenpeace UK, added: "Our oceans are in crisis, with six out of seven sea turtle species threatened with extinction. Aardman's global popularity and distinctive blend of humour and emotion can bring this message to people around the world, spurring bold action to protect the oceans.

"A strong treaty would pave the way for a global network of fully protected ocean sanctuaries, placing 30 per cent of the world's oceans off-limits to exploitation by humans and giving marine species, such as turtles, a chance to recover and thrive."

Greenpeace has run several high-profile campaigns illustrating how human activity destroys animal habitats in the past year, including 'Turkey vs Potato: The Ultimate Roast Battle', the original Rang-Tan animation that was re-used by Iceland, and presenting Burger King with an award for 'flame grilling the Amazon'. 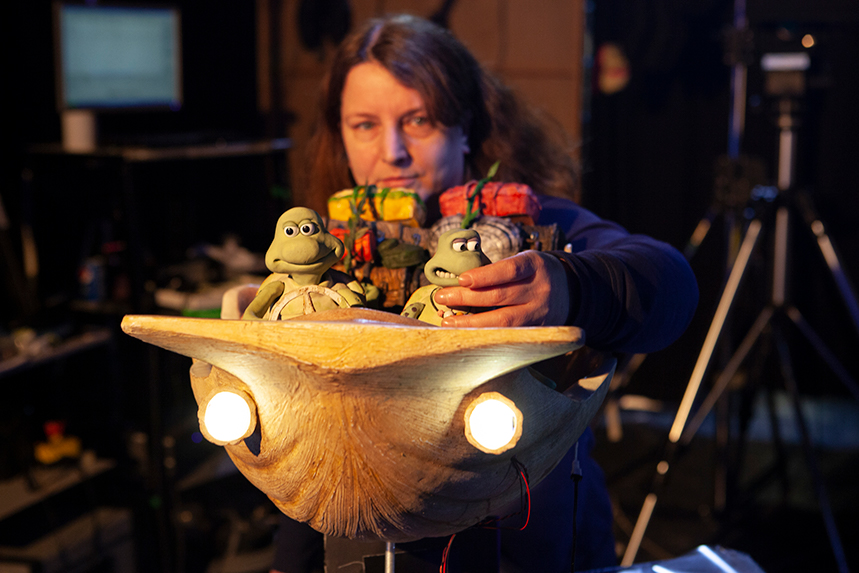 An animator works with stop-motion puppets and their shell vehicle during the making of a 'Turtle Journey'. Photo: Alex Yallop/Greenpeace