The 'Brands in Motion' study, by WE Communications, asked 25,000 people across eight countries to respond to a range of questions designed to gauge their rational or emotional responses to aspects of the healthcare sector.

In the UK, 400 consumers were surveyed for their attitudes to the health and wellness sector, while nearly 500 b2b decision-makers, such as healthcare professionals, were asked for their opinions of the prescription health sector. 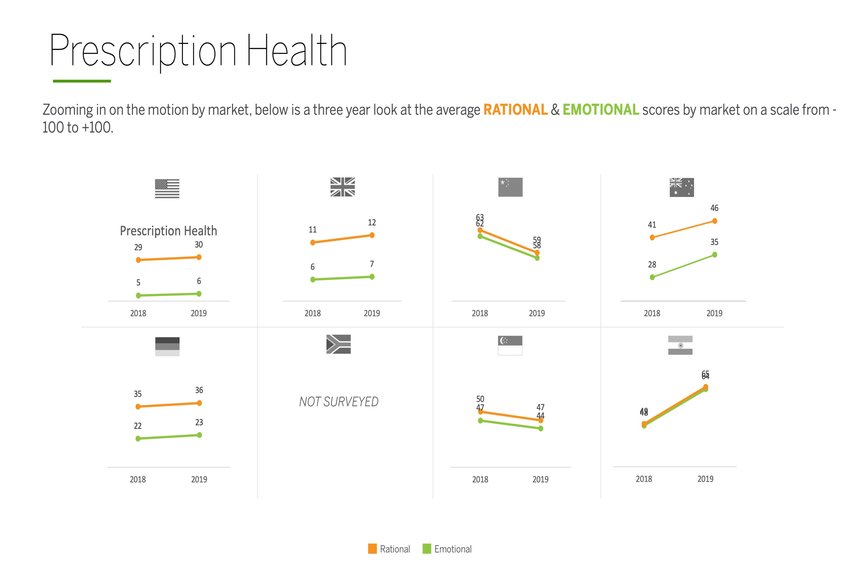 Overall, healthcare professionals had a slightly more positive rational and emotional view of the prescription sector in 2019 than they did in the previous year, with both scores up by one percentage point.

There were similarly small upward shifts in perceptions of the sector in the US and Germany, while Australia and India showed bigger percentage increases in rational and emotional perceptions.

The research showed downward shifts in positive perception in both Singapore and China. 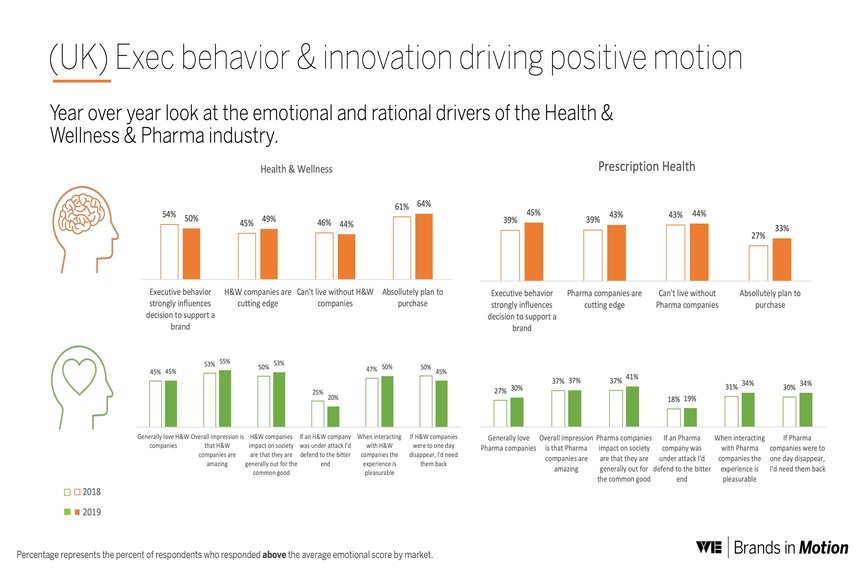 Healthcare professionals were asked specific questions to explore their rational and emotional responses to the sector.

Asked whether executive behaviour in prescription health companies strongly influenced their decision to support a brand, 45 per cent said it did, compared to 39 per cent in 2018.

Catherine Devaney, deputy managing director and head of health at WE Communications, said: "Companies need to ensure their C-suite is active across channels to help bring the narrative to life as well as sharing content which doesn't directly relate to their company. Thought leadership is essential."

In the study, 43 per cent of respondents agreed with the statement that 'pharma companies are cutting-edge', compared to 39 per cent the year before.

Devaney said: "For an industry that defines itself on an innovation platform, this should be higher. Our point of view is that we are seeing innovation fatigue. The industry can be guilty of overstating innovation where really there are [only] incremental improvements. If everything is innovative then nothing is."

She added: "Companies need to think more about the corporate brand and tell a compelling narrative, which supports product comms."

According to WE's study, expectations of pharma companies are rising, but people do not connect life-saving interventions provided by the sector to health companies.

Events such as the growing opioid crisis and increases in the price of certain drugs have failed to improve the sector's reputation.

When respondents were asked for their emotional reactions to the sector, 41 per cent agreed with the statement that pharma companies were 'out for the common good', compared to 37 per cent in 2018.

She said: "Pharma companies will want to tackle this perception by articulating an authentic purpose – which doesn't sound like every other company – and living it with every decision and every action." 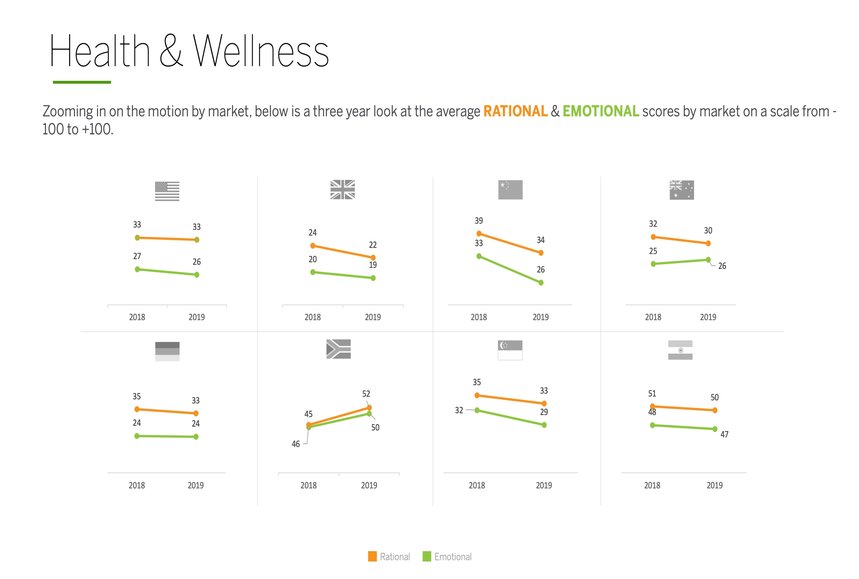 Overall, consumers had a less positive rational and emotional disposition towards the health and wellness sector in 2019 than in the year before, with 'rational' scores down two percentage points and 'emotional' scores down by one.

The drop in positive perception was reflected in almost all the countries covered in the study, with the exception of South Africa, which had marked increases on both scores.

China recorded the biggest drop in positive perception of the health and wellness sector in the past year.

WE said the health and wellness sector had gone quiet after a period of innovation and there were opportunities for consumer health firms to innovate – perhaps by emulating other industries, such as the automotive sector, which are using technology to innovate.

Consumers were asked whether executive behaviour within health and wellness companies influenced their decision to support a brand, with 50 per cent saying it did, down from 54 per cent in 2018.

And there was an increase in the perception that health and wellness companies are "cutting-edge": 49 per cent of respondents agreed with this statement, compared to 44 per cent the previous year.

Consumers were also asked whether they perceived health and wellness companies to be working for the common good, with 53 per cent agreeing with this statement, up three percentage points on 2018.

However, asked whether they would defend a health and wellness firm which was under attack "to the bitter end", only 20 per cent said they would, compared to 25 per cent in the previous year.

WE said the study's findings showed that companies need a fresh approach to combat public indifference to healthcare, and that comms professionals working in this field should push their companies out of their comfort zone to be creative and take "appropriate risks".

The reward, the agency said, would be truly impactful comms that build a lasting connection with people and engender mutual respect.

The findings follow a report by the Healthcare Communications Association and healthcare agency 90Ten, released last month, which said that pharma companies risked losing their influence unless they took a more innovative approach to comms.

Devaney concluded: "Companies need to be human to the core and use every touchpoint as an opportunity to tell a story on a human level. This isn't just about purpose; this is about the company's soul and relating to audiences on a human level – not behind a four-page press release which reads like a Patient Information Leaflet you'd find in a pack of pills."