With about one-third of its revenue now from ‘non-traditional’ PR, Harvard – the PRWeek Awards Mid-Sized Consultancy of the Year 2019 – appears to be a shining example of marcomms integration.

"I hate the word," he tells PRWeek from the firm’s London HQ.

"The industry has a huge preoccupation with putting everything in boxes. Are we the PR agency of the year or are we the marketing agency of the year? It genuinely doesn’t matter. It’s all about a group of people doing some great work for clients based on the services they want you to do, and we really get our knickers in a twist about it."

The fast-talking MD is no fan of chin-stroking procrastination. That’s not to say St Claire is not methodical about strategy (more on that later), but he seems rather unwilling to be distracted by nebulous concepts when there’s a business to grow.

And grow it has. Harvard, whose client list includes Cisco, Fujitsu and Salesforce, was the UK’s fastest-growing tech PR agency in 2018, when it won 92 per cent of pitches and added 25 clients. Revenue surged 18.5 per cent to £6.4m – it’s set to hit £7.5m in 2019. Headcount is about 80, with around 25 in marketing-focused roles including creative, planning, production and digital.

The contrast to his early days at Harvard is stark.

Arguably the UK’s first tech PR agency, founded in 1979, Harvard was acquired by Chime in 2000 with 200 people in seven offices in Europe. This had shrunk to 11 in London, and the same in Germany, by the time St Claire arrived in 2011. Alarmingly, half the agency’s clients and half the employees left that year.

"In many ways, it would have been easier to start again," he admits.

Junior employees were increasingly overseeing client accounts, and a "siloed account manage-ment" structure meant staff were eager to hold on to work rather than working co-operatively. St Claire compares efforts to stop this to "freeing up a muscle that had grabbed onto the bone". Confidence was low: "There were no creds and no website. And within Chime there was always this feeling that we were a bit put-upon – we’d help pitch, but we’d never get the money."

On the plus side, expectations were also low – giving Harvard "the luxury of time".

"My thinking was, we’re not really fit for purpose, to do the big clients yet, so let’s take a step back, put in a management team. All those early people we hired were really strong client services people."He highlights Ellie Thompson (MD, PR and AR) and Pete Marcus (group planning director).

"The other thing we said was, never lose a client because we don’t love them enough," St Claire adds. "Whenever times get tough and clients might drop out, we will always say let’s do what we can to keep clients."

Growth accelerated in 2014-18 alongside the agency’s ‘five-year plan’, inspired by a book by US business ‘guru’ Jim C Collins called Good to Great: Why Some Companies Make the Leap.

"It’s about working out what you’re going to be best in the world at, and doing all the little things really, really well to get there," St Claire explains. An integrated client proposition, structured people programmes and great work were deemed crucial, and St Claire’s methodical approach comes to the fore as he details the four priority elements:

Investing in the future

That year the leadership also restructured into three core groups: a leadership team – a cross- agency group responsible for driving cultural change; a group management team, bringing together team leads and revenue-owners; and a refreshed board with an equal gender split.

"It works really well, and it gives people that progression," he says. 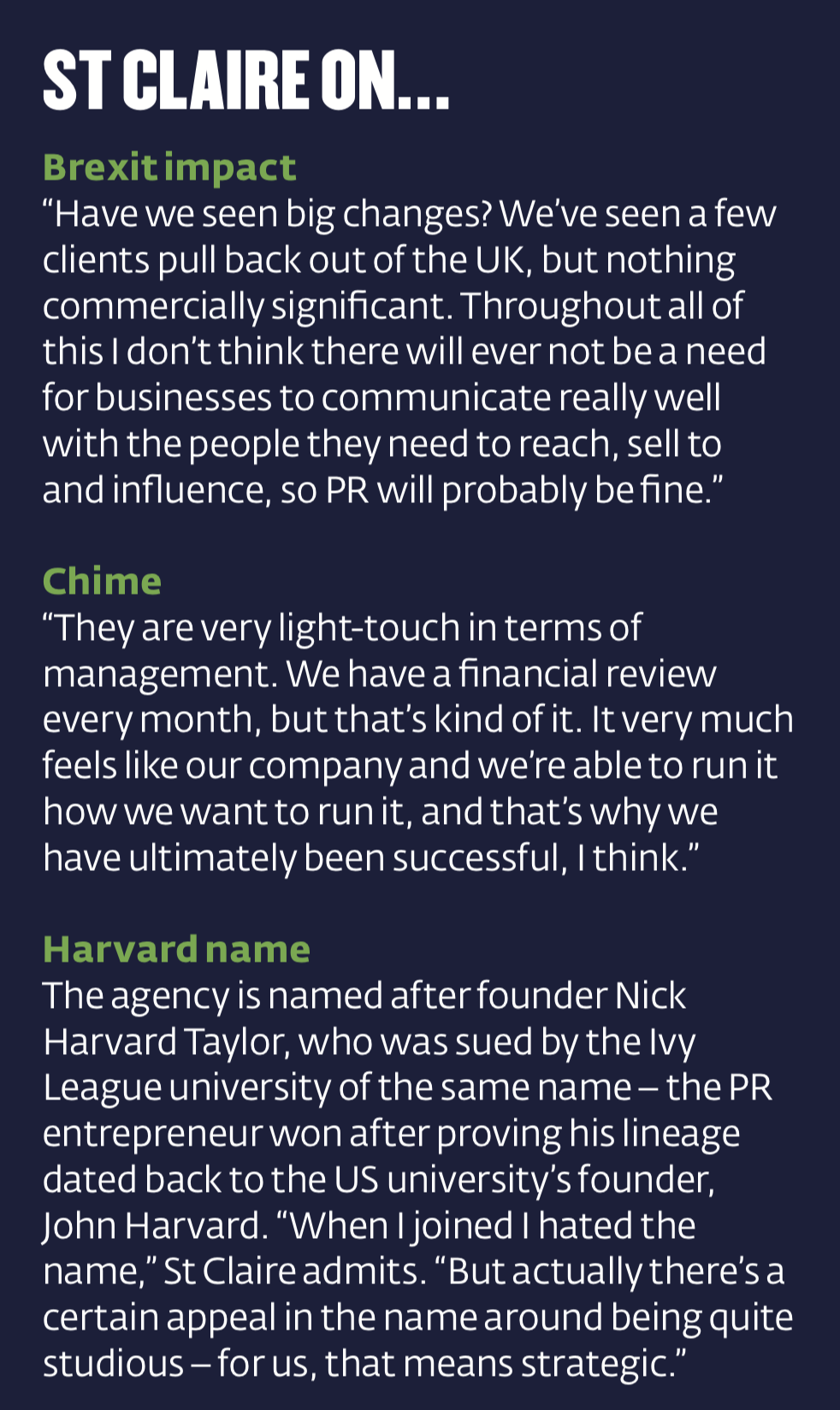 After abandoning his initial plan for a career as a journalist, St Claire entered PR in 1996 at Franklin Associates, the firm founded by Terry Franklin, who handled the media tour for the moon landing.

The agency didn’t even have a computer – St Claire put this right and gained his first taste of tech PR, working for clients including HP.

A period at AxiCom followed during the dotcom boom – and then at Kaizo, another tech agency, during the bust.

In-house was next, first at O2, then Microsoft, where he oversaw b2b comms. St Claire’s heart was agency-side, however, and he moved to b2b tech specialist Octopus before Harvard.

Where does Chime’s 2018 acquisition of US tech agency Method Communications, which joined the Chime Specialist Group alongside Harvard and inEvidence, a customer advocacy specialist, fit into St Claire’s strategy?

Method was "a Chime acquisition, but it was led from a Harvard need", he says. Clients from both America and the Far East wanted a presence in the US, and Harvard required "some critical mass very quickly".

Harvard and Method have already shared client work and successfully pitched together for Workplace by Facebook.

"The idea is we would have a global tech agency that could grow – we know there’s a need for it and we think it could do really well."

What are St Claire’s other priorities for 2020? Satisfying clients’ increased focus on corporate and reputational work is one. Harvard has employees to handle this, he says, but the aim is to "package" the offer more coherently.

A dedicated events proposition is also on the cards – Harvard recently hired a head of production, Johnny Brock. 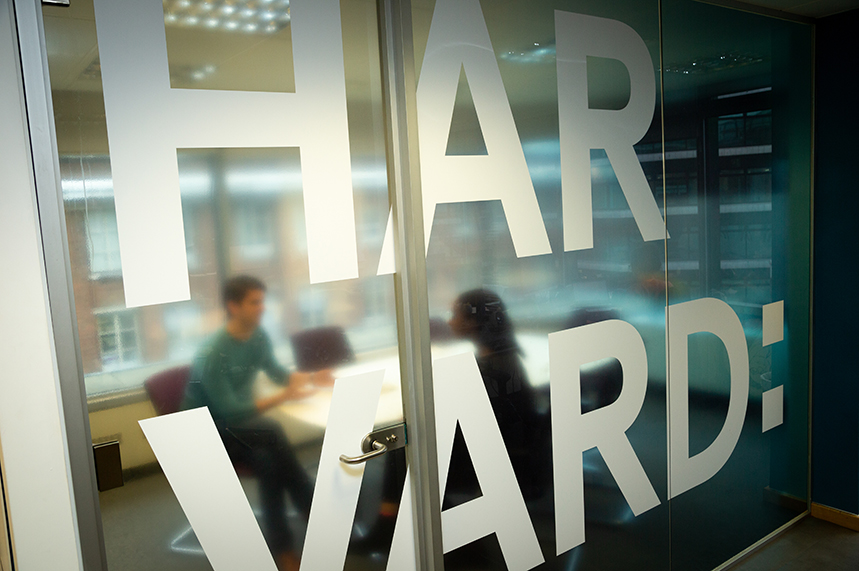 Perhaps most interestingly, last month the agency launched a consumer tech PR offshoot called Eat the Fox ("Harvard doesn’t sound like the cool new consumer shop," St Claire deadpans). About 10 per cent of the business is consumer, but a dedicated consumer-tech proposition will help with differentiation, he argues.

None of this sounds revolutionary, but St Claire favours the ‘fast-follower’ approach: adapting new ideas from elsewhere rather than diving in with untested concepts.

"I don’t feel that I need to be right at the cutting edge of every new thing.

"I like to look at options then, when I place my bets, to make them much more considered than just risks, because I think they’ve got a much better chance of coming off," he says.

St Claire will hope his cautious, methodical approach will continue to pay dividends: "If we hit our number next year it’ll be our 10th year of growth. I think we would have been one of the agencies that has helped define tech comms for the last 10 – we’d love to for the next 10 as well."

Whether we’ll still be talking about integration in 2030, time will tell.