One of the campaign images, titled 'Night of the Itchy Eye', features a giant, bloodshot eye, with blood vessels turning into sinister hands reaching towards the iris.

Another poster, for 'Sore Throat and the Lost Voice', shows an Indiana Jones-type figure inside an enormous open mouth.

The posters carry the strapline "Take the drama out of minor illnesses" and urge people to "See a pharmacist". 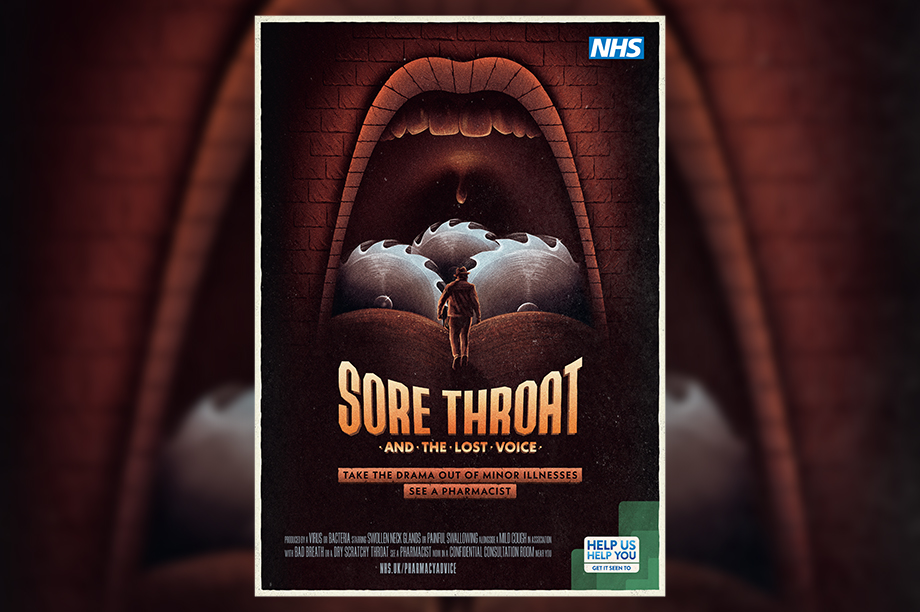 In the case of the poster for 'Night of the Itchy Eye', the credits state: "Produced by An Infection Or Allergy starring A Bloodshot or Watering Eye With a Burning or Gritty Sensation in association with Red Eye Productions see a pharmacist now in a confidential consultation room near you."

Phil Bastable, head of marketing at NHS England, said: "This phase of the 'Help Us, Help You' campaign is a really important one. Community pharmacists are invaluable NHS experts, often underutilised because not everybody understands how qualified they are to help."

He added: "This year we're asking the public to 'take the drama out of minor illnesses' with an exciting new campaign creative, that we hope will really cut through and change behaviour."

The nine-week campaign, which will run until 31 March, is aimed at the general public, with a secondary focus on parents and carers of children aged five to 12 years old.

It will be an integrated multichannel campaign supported by PR, social media, TV and outdoor advertising. Earned-media activity will focus on consumer feature articles, and organic social-media support will be amplified through NHS and stakeholder organisations.

NHS England has also released a campaign film which builds on the core idea of taking the drama out of minor illnesses by seeking the advice of an NHS pharmacist.

Bastable added: "The TV ad uses overblown reactions with tongue in cheek horror, rom-com and action movie styles to grab the audience’s attention and this film theme is echoed in striking out of home posters. This gives the NHS a campaign with the flexibility to deliver the messages in the most impactful way per channel and testing with the public and pharmacists showed this approach worked well."

The campaign's central message is that people should make their local pharmacy their first port of call for medical advice on minor health issues such as coughs, colds, stomach problems and aches and pains.

It is part of the wider 'Help Us Help You' campaign, now in its third year, which promotes the importance of people taking personal responsibility for their health.

The campaign aims to highlight the fact that community pharmacists are qualified healthcare professionals who can offer clinical advice and refer people to a GP or A&E where necessary.

It is also seeking to persuade people that going to their local pharmacist is a more convenient, quicker way to get advice on minor health concerns, with no need for an appointment.