The proportion of comms professionals experiencing mental-health problems has changed little in the past year, but PR employers appear to be dragging their feet on the issue, new research from PRWeek suggests.

The results shine a spotlight on an apparent lack of action by employers, with a reduction in the proportion encouraging staff to talk about concerns and fewer employers thinking the industry accepts people with mental-health problems.

Far fewer of them think their own organisation supports staff who have issues, meanwhile. A lack of mental-health policies is also a concern.

One year ago, PRWeek reported the results of an in-depth survey into mental health in the industry. We promised to run a follow-up to examine whether, and how, the situation had changed.

Below, we present the findings of the follow-up survey*, conducted in November and December 2019, which include anonymous comments from some respondents. 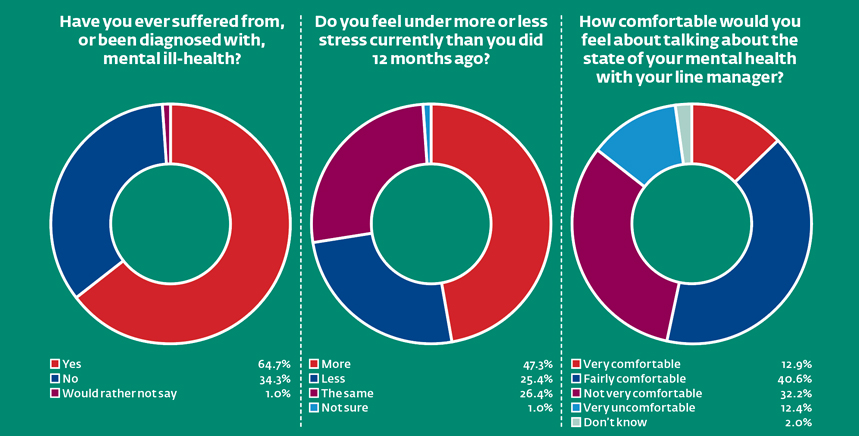 Let's start with a downbeat finding. Almost two-thirds (64.7 per cent) of the survey respondents said they have suffered from, or been diagnosed with, mental ill-health. That's up from 60 per cent in last year's survey.

Like last year, it's worth pointing out that this survey did not specify what constitutes mental ill-health. But several respondents pointed to stress, anxiety, attention deficit hyperactivity disorder (ADHD), and depression. One person revealed they had experienced suicidal thoughts.

Some said they have been medically diagnosed with mental ill-health, while others have experienced one or more of the symptoms above.

"I have never been diagnosed with mental-health issues, but at some points I have been uncertain if I've been experiencing them," one respondent said. "People often point out that a physical issue or injury is clear to see, whereas a mental-health issue does not manifest in the same way. Therefore, you don't know whether you're experiencing a genuine 'issue', or just having a bad or busy period."

On a similar topic, 47.3 per cent of respondents feel they're under more stress than they were 12 months ago. That's almost unchanged on last year's survey (49 per cent).

One individual summed up the views of many: "We work in a fast-paced, highly commercial sector. Stress is an everyday factor."

Another person highlighted how changes in their company's situation has made the situation worse.

"We've gone from small UK firm to private-equity-backed and US-led, and are under massive pressure to grow profitability fast without adding to overheads – ie: any more comms staff. It's a challenge. Ironically, the fact that we tell a great comms story just adds to the expectations as to what the firm can achieve."

But for another respondent, a change of circumstance had the opposite effect: "I've moved from a London PR agency to a virtual PR agency, which has given me more flexibility and less stress." 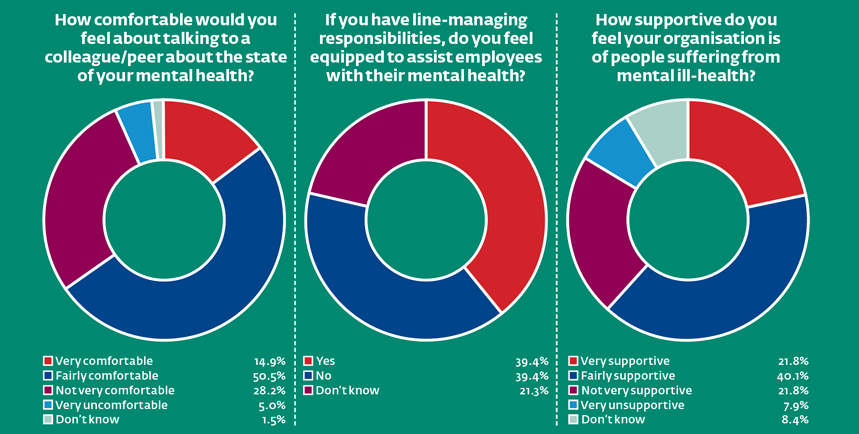 Asked how comfortable they are discussing their mental health with their line manager, the proportion that answered "very" or "fairly" comfortable – 53.5 per cent – was almost unchanged from the previous year.

The proportion that have spoken to their manager about it was also almost unchanged (42.8 per cent, versus 44 per cent in 2018).

Some respondents held strong views on the idea of raising their mental health with their boss.

"[My line manager] would not understand," said one individual. "She is a bully. She criticised a former employee for taking anxiety pills – the anxiety was created by the boss herself. All the team wants to quit, because of her."

"No support whatsoever," said an agency respondent. "Preach it to clients, ignore staff."

Another person quipped: "In general, I would have no problem discussing [it] with a line manager. I'm just not comfortable talking to MY line manager."

A further respondent said: "My line manager is hugely supportive, but there's such a lack of training she's normally really out of her depth."

One person said they are comfortable talking to their line manager. However, "when I attempted to speak to the head of department (who is a boomer), they shut off and told me my emotions were invalid and I should not be feeling that way, which in turn made my anxiety much worse".

Not all responses were negative, however. "My agency is putting an increased focus on employees' overall wellbeing, which largely manifests with a focus on mental health," said one respondent. "We also have a number of team members – including me – that form part of a sub-team that focuses on wellbeing initiatives that will benefit the team."

Like last year, a higher proportion of respondents feel "fairly" or "very" comfortable talking to a colleague or peer about such issues (2019: 65.4 per cent; 2018: 62 per cent) rather than a line manager.

"The team on my level are really easy to talk to and are understanding," one respondent said.

Problems can still occur, however. "Colleagues and peers can be very judgemental about personal life," said one individual.

Worryingly, the proportion of respondents with line-management responsibilities who feel equipped to help employees with their mental health has fallen – from 50 per cent in 2018 to 39.4 per cent in 2019.

According to one line manager: "We don't have the internal provisions, and external help can be costly. NHS services are good, but the wait time is long and often when people come to you it's because things have become unbearable."

Other responses were more positive.

"I have spent a great deal of time researching and implementing positive practices to boost my mental wellbeing, including addressing regular exercise, time spent in nature, dietary choices and sleep patterns," said one individual.

"I have already shared this insight with some of my new colleagues and am happy to discuss further with all. I have also blogged about mental health recently, opening up a dialogue with others on this."

There was a fairly sharp fall in the proportion of 'bosses' (chief executives, managing directors or board members) who encourage staff to talk about their mental wellbeing with line managers.

Just over half (52.5 per cent) of them in the most recent survey said they do so, down from 77 per cent in the previous year.

"Not actively," was one individual's response to the question, "but we do have an open-door policy on mental health and any other difficulties in the workplace."

"I encourage my team members to be open with me," said another. "I have a duty of care."

Not surprisingly, the proportion of bosses who said they have had an employee talk to them about their mental health also fell, from 86 to 61 per cent. 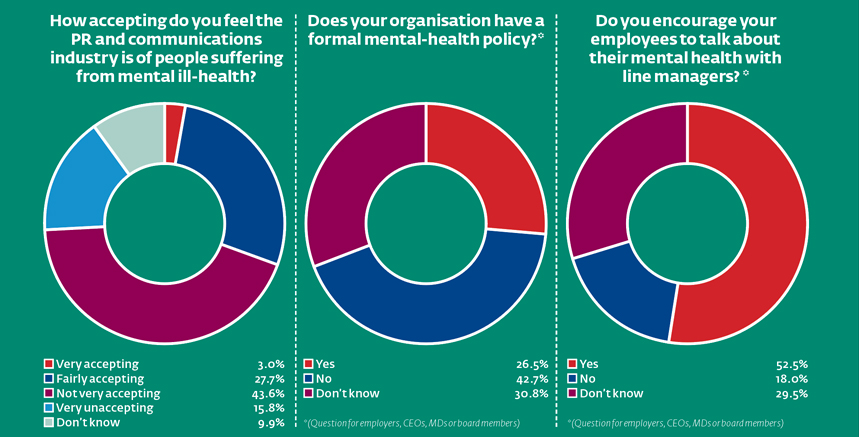 Another worrying statistic relates to how accepting PR bosses feel the industry is of people living with mental ill-health.

In the latest survey, 34.9 per cent of respondents thought the industry is "very" or "fairly" accepting, down from 53 per cent one year earlier.

In fact, almost half (46.9 per cent) now think the industry is not accepting of those with mental health issues.

Last year we reported on a 'perception gap' on this issue between employers and employees, although the gap appears to have narrowed since then. Of all the respondents, 30.7 per cent think the industry is "very" or "fairly" accepting of people with mental ill-health.

More bosses are sceptical of their own organisation’s approach to mental-health support, meanwhile.

Asked how supportive they feel their organisation is of people suffering from mental ill-health, 56.2 per cent are "very" or "fairly" supportive. That's a significant decline compared to the previous year (90 per cent).

Said one boss: "I'd say we are culturally supportive, but this is not reflected in processes, guidelines, training, etc."

The perception gap between employers and employees is more pronounced here.

Most employees still think their organisation is supportive of people with mental ill-health; 61.9 per cent agreed with this statement in this survey, compared to 65 per cent the previous year.

"I know that one member of the team struggles with his mental health and the company is very accommodating," said one respondent.

Others are more downbeat, however. "HR and mid-level line managers are supportive, but senior management are dismissive – which I think links to them being of the 'stiff upper lip' generation," one person wrote. Said another: "We have access to mental-health services, but I feel it's a tick-box exercise. They don't want to talk about it themselves."

Some say they plan to implement a policy soon, while others maintain it's not necessary.

"We are a small, flat-structured agency and we have good lines of communication across the board, so it doesn't feel necessary as we all talk very openly," one respondent stated.

Nonetheless, many employees appear to view a mental-health policy as a basic provision if the industry is to adequately tackle mental ill-health.

One member of staff said mental-health policy is "seriously lacking" in their business. "We do a lot of PR around… what is happening in our agency and why we are so 'forward-thinking', but there is no formal mental-health policy and managers don't understand how to address mental health in employees. They don't practice what they preach."

From the editor-in-chief: PR employers must step up to aid staff under pressure