Scott Morrison was the marketing chief behind Tourism Australia's 'So where the bloody hell are you?' campaign in 2006. Thirteen years on, those words have come back to haunt him.

Elected prime minister of Australia in 2019, Morrison has been heavily criticised for taking an "ill-advised vacation" with his family in Hawaii as bushfires turned large parts of his country to ash.

While he was enjoying the Hawaiian sunshine – with reports he had even asked his press office to suppress details of his whereabouts – bushfires had blanketed much of Australia’s East Coast in smoke, leaving an eerie, dystopian orange hue that felt a lot more like the film Blade Runner 2049 than Australia in 2019.

Upon returning home, Morrison received further criticism for failing to step up and lead the nation through a crisis.

He has been accused of being far too slow to act and leaving it up to state governments and emergency services, downplaying the severity of the bushfires, refusing to acknowledge their links to climate change and delaying the deployment of Australian Defence Forces' resources to help overstretched firefighters.

Instead, Morrison has chosen to hold awkward photo opportunities with national cricket teams rather than engage with desperate and devastated Australians pleading for help.

When he has ventured out to towns ravaged by the blazes, victims have refused to shake his hand – and in one case, the PM even turned his back on a woman who, after losing everything, was asking for the government to offer more help.

This is what happens when a PM does a picture opportunity without actually being able to offer the locals anything tangible. I can understand him leaving when the men got aggressive but I can’t believe he walked away from the woman pleading for help: https://t.co/gUYrKDz7kT

His messaging over the festive break has been labelled "tone-deaf" and "lacking in empathy", while some have criticised his calls for prayers and patience rather than setting out immediate plans to help communities that have been engulfed by the flames.

After initially ruling out any payment to volunteer firefighters (a policy that has since changed following a backlash), Morrison's New Year’s message described Australia as "one of the best countries to raise children".

In another press conference, he said that Australians would gather around their TV sets enthusiastically to watch the Sydney test match between Australia and New Zealand, completely ignoring the mood of the nation.

Most recently, he released a self-promotional video promoting the government's response to the fires, which a prominent Australian political journalist described as "a bizarre act of self-love as firefighters battle to save Australia".

We’re putting more Defence Force boots on the ground, more planes in the sky, more ships to sea, and more trucks to roll in to support the bushfire fighting effort and recovery as part of our co-ordinated response to these terrible #bushfires pic.twitter.com/UiOeYB2jnv

Rochelle Burbury, principal of independent PR firm Third Avenue Consulting, was with her family in Mt Kosciuszko National Park in southern NSW over Christmas when bushfires spread down south.

"We spent Christmas in Thredbo (a winter ski resort that is now being evacuated), and the smoke from Sydney to Thredbo was like nothing I've ever seen before," she said.

"We couldn't do any bushwalks; even going outside was difficult. My brother lives outside Jindabyne [in] quite a remote area; he's evacuated his kids to their grandmother and he's staying to defend the house if he has to."

Burbury told PRWeek the overwhelming feeling in Australia is anger toward Morrison, whose nickname 'ScoMo' has been altered by many on social media into 'SmoKo'.

"His inaction, his complete lack of leadership and lack of empathy is unbelievable," she added. "It just feels like the country is on fire while he poses with the frigging cricket team at (the prime minister’s official Sydney residence) Kirribilli House."

Don't worry about the fires folks. If you don't have a house, go sit in someone's house around the tv, for the cricket. They are the spirit of Australia. I mean, look they love him. #australiahatesyouscomo pic.twitter.com/poaHBUg50h

He said three months of smoke and haze has made it difficult for his family to settle down in Sydney. Martin told PRWeek he believes the Australian PM has handled the situation poorly – a direct contrast to how New Zealand PM Jacinda Ardern responds to disasters, including a recent volcano eruption that took several lives.

"[Morrison] seems to lack any real connection to the people and finds it hard to come across as authentic and genuine. He is so robotic and lacks any emotion," Martin said.

"Total contrast to the NZ PM when they have had a crisis. I'm not sure who is advising [Morrison], but the film they released online to say what they were doing was an extraordinary misread in tone. Pure ignorance, really, and compounded the belief that he is very naive." 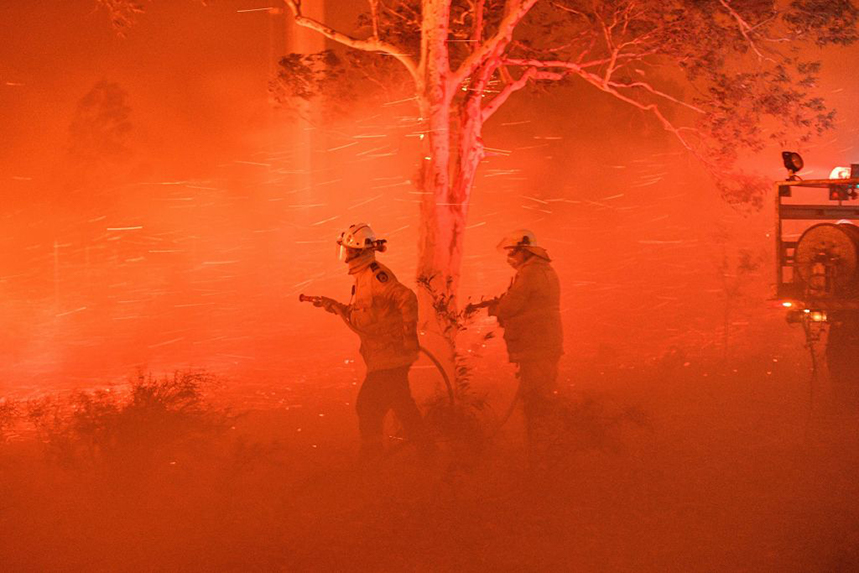 As Morrison enjoyed the Sydney pyrotechnic display from his harbourside residence on New Year's Eve, firefighters across the state were battling deadly 'fireworks'. Photo: Getty Images

Observers from outside the country have also noted how much the Australian PM has misread the national mood.

Sue Garrard, a leading expert on sustainability and corporate communications, told PRWeek Morrison’s failures run much deeper than poor comms; his government is known for its protectionist policies of Australia's fossil fuels industry and Morrison famously once paraded a lump of coal inside the House of Commons.

Not only has the PM misread the national mood, but a lack of authenticity about the root causes of the bushfires is only fuelling further discontent.

"I think it is part of a wider problem that political and business leaders will face in the coming year – their inability to tune in to a topic which is suddenly at the top of people's concerns, people who are angry and scared, and ready to apportion blame very quickly," Garrard said.

"These leaders need to recognise a fundamental truth – you can't talk your way out of something you've behaved your way into. You just can't fake sincerity on this stuff.

This is what firefighters are facing day in, day out in Australia.

Herein lies a problem for Morrison and his government. A poor record on climate-change action – Australia was recently ranked last in an analysis of climate change policy – makes it much harder for the PM and his government to pivot toward admitting the bushfires crisis is linked to climate change, and coming up with policies to address it.

His government is also stacked with former mining executives and heavily influenced by a network of lobbyists and political donations from the fossil-fuels industry.

This is despite mounting evidence from scientists and firefighters that climate change is making conditions much drier and hotter, and bushfire seasons are getting longer and more extreme.

Australia reported its hottest year on record, by some distance, in 2019. Several former fire chiefs have been trying to raise the alarm on climate change with the government for several years, but have so far been ignored.

Victoria Fielding, an academic and researcher of political communications in Australia, said the PM is "stuck between a comms rock and a hard place".

"In Morrison's eyes, he must maintain the business-as-usual approach to bushfires and play down the influence of climate change because he knows his public record on this issue is going to come back to bite him," she said.

"Australians are not only scared of the current bushfire threat, but also that this is a new reality that may even continue to worsen if emissions are not reduced. Comms strategies aren't just used to wallpaper over crises and to create the perception of action when there is none; they are used to lead."

Fielding said her research has found that when a politician loses legitimacy, their credibility is undermined and they are no longer trusted – a position in which Morrison now finds himself.

Daniel Munslow, founder and director of reputation management and crisis comms firm MCC Consulting, believes Morrison has "crossed the threshold of long-term damage to the reputation of the leadership of the government" and his task will now be to quickly build back "reputational resilience".

He adds: "Can they reposition Morrison as 'the people's leader' during these times? When it comes to crisis communication people want to know their leaders are on their side and fighting for them. Even an element of vulnerability is called for, to show that while he is a strong leader, he also feels with his people. Morrison's PR narrative has been anything but that; and this is not a crisis anyone can spin away." 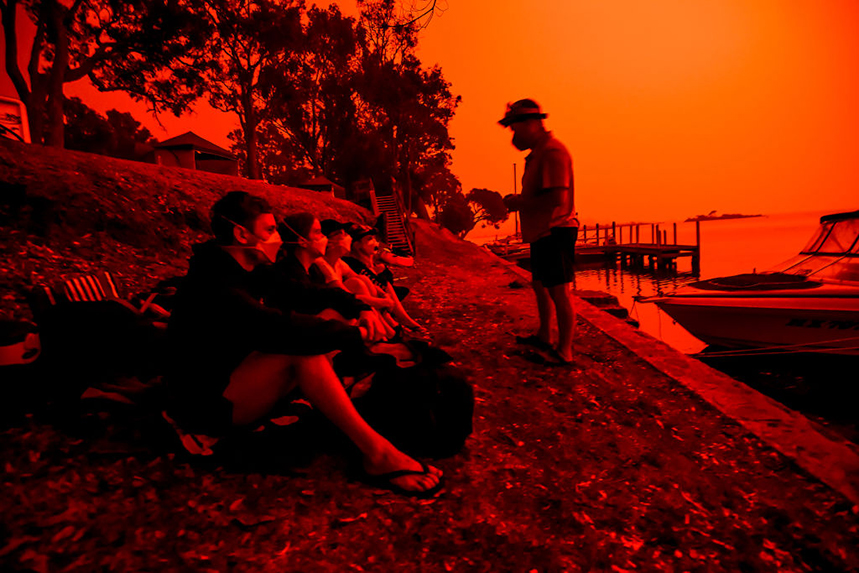 Residents of Mallacoota and other coastal communities have been forced to take refuge near water as out-of-control bushfires block all escape routes.Photo: Getty Images

This involves getting involved on the ground, which to date has been met by a lukewarm response for a lacklustre effort.

"[The people] expect you to take decisions that support social cohesion – not detract from it. Quite frankly, they expect him to get his hands dirty," Munslow added.

"To put it bluntly, let's see the leaders holding an injured koala covered in soot and giving it water. Would this normally be where you would find a prime minister? Probably not. But these are atypical times, that require atypical (and very courageous) leadership."

In other words: less spin, passing on responsibility and cringeworthy self-promotional videos, and more action.

The question is whether #ScottyfromMarketing is up to the fight.

If you would like to donate money towards the bushfires appeal, please visit the Red Cross disaster relief appeal page and give whatever you can.