Welcome to a new decade! Start the year positively, do better and feel better. Here are five creative ideas that’ll help you crush your January and one clanger that won’t.

Over the pond in Chicago, Miller Beer has come up with a cheeky way of continuing to flog beer during Dry January. Aimed at the "sober curious, who are not confident that they will be remain dry for the month, but want to give it a go anyway", Miller64 is offering a middle ground with a campaign entitled ‘Dry-ish’. Its low calorie 2.8% ABV beer-ish will help you stay 'sober-ish'.

Using actor Nicholas Braun in a content piece called 'Moist’, he humorously explains why people should drink Miller64 in January. In addition, Miller64 is offering a rebate programme to help you go 'Dry-ish'. Text and you'll receive cash back on your purchase of a 24-pack of Miller64 to kick start your new year.

Verdict: Don’t follow the flock and you’ll stand out.

In the war against disposable coffee-cups, Air New Zealand has been brave enough to reach for the sky. It is trialling an edible coffee cup made of biscotti by local company Twiice. You can find them onboard its planes and on the ground in Auckland’s Air NZ lounges.

The leakproof edible cup is made from wheat flour, sugar, egg, vanilla essence and natural vanilla flavour - and won’t bust a leak while you’re sipping, as the cups are "leak-proof".

The airline estimates that switching to plant-based coffee cups is expected to prevent around 15 million cups from going to landfill annually.

Verdict: Real change from within is refreshing to see. 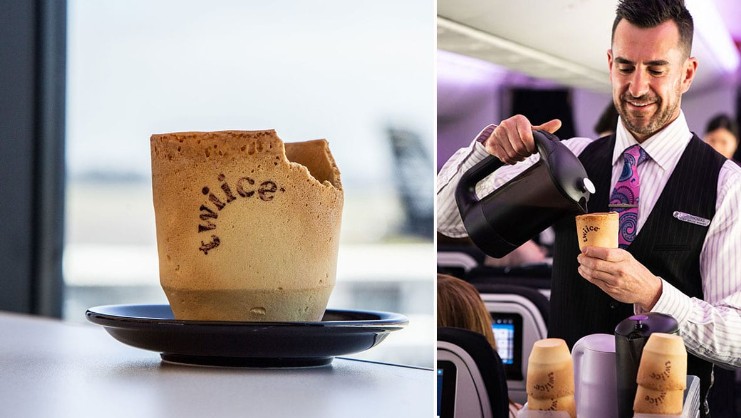 It’s sale season! Through December and January, you’re looking to find ‘out-of-this-world’ deals to make you feel content in your quest for retail therapy. Mastercard smashed its competition when it managed to hijack a solar eclipse for its sale.

On 26 December 2019, a solar eclipse occurred. The eclipse was visible in Saudi Arabia, Qatar, the UAE, and Oman, across southern India and Sri Lanka, to Indonesia and Malaysia.

It only happens once in every five generations, when the sun and moon fantastically mirror the Mastercard logo exactly, broadcasting it across the sky.

Mastercard cleverly jumped on this event, featuring its "Astronomical Sales" prices on its partner website Noon.com. As the visible amount of the sun got smaller, so did the prices on the website. When the eclipse reached 97 per cent, Mastercard holders got a 97 per cent discount. The event lasted only for the brief window of almost-total eclipse, and when the eclipse was over, the sale ended.

Verdict: When sales marketing and PR converge you’re onto a winner.

As an unashamed sci-fi geek, this idea tickled me. Forget R2D2, meet Bill: BA’s new AI Wayfinding Robot. In 2020, BA will be trailing these little guys: AI robots built to guide you through Heathrow Terminal 5. Bill will speak and understand loads of different languages, and help flyers check-in, navigate through security, and get to their flight using advanced geo-location sensors.

Verdict: Bring on brands that make life easier and happier, bring on the robots.

Catching a new series is a fantastic way to kick off the new year. To launch Dracula, the BBC showed us how it should be done. A simple outdoor billboard with strategically-placed vampire stakes transforms into a sinister shadow portrait as the sun goes down.

Verdict: Wish we had thought of that.

In a polar opposite to Miller64, William Grant & Sons' low-alcohol spirit Atopia is jumping on Dry January by hosting "laughter sessions". At this one-day event to combat Blue Monday, you can take part in "laughing yoga" which gets guests to simulate laughter, followed by a bit of stretching and breathing.

Selected innovative performer comedians will be at the event, holding sessions for visitors to laugh, all while they enjoy a low-alcohol cocktail at the Atopia bar.

The link to the low-alcohol spirit and "laughter sessions" is tenuous. It feels like the brand is jumping on the trend of Blue Monday without a reason as to why it fits with Atopia.