We opened the world’s first ‘Dive Thru’ to launch the Huawei Watch GT2. The underwater watch kiosk allowed punters to get their hands (or wrists) on a brand new sports watch but only if they dived into the chilly waters of London’s Royal Victoria Dock.

The idea started to take shape after we received direction to focus on the capabilities of the Huawei Watch GT2 for open water swimmers.

The sport has been growing in popularity, normally making the news for extreme reasons, from naked Christmas Day swimmers to Ross Edgeley’s amazing swim around Great Britain. We wanted to think of a challenging and extreme way to allow the public to get their hands on the watch - which led us to the idea of opening a shop in the middle of the water, specifically London’s chilly Royal Victoria Dock.

Our ‘Dive Thru’ would showcase one of the unique features of the product, allow customers to trial it there and then and deliver a strong news hook that could travel through earned, shared, loaned and owned channels.

Not many! Once we (with the client) had decided on open water swimming as a target we got to the idea quickly - although we did have two other thoughts in our response.

One was campaigning to open up to the public many of the private open water swimming spots in the UK (in stately homes etc.) and the second was the (slightly ambitious) idea to work with Tom Gregory, the 11-year-old who swam the channel in 1988, to retrain him to swim the channel again 21 years on from the original feat.

As ever, we collaborated with some of the best in the business to ensure this activation looked awesome but was also totally and completely safe for the public to take part in.

The Dive Thru itself was conceptualised and designed at Mischief and it was built by our production partners.

We had very particular photography needs, including shooting split level, and worked to hire specialist equipment to ensure the visual came to life. Split level water photography looks amazing in crystal clear waters, but is a bit more problematic in a British dock in October!

The hero film was edited over the course of 48 hours so it could be made available as part of our earned media package.

Floating it! The build of the structure was precise and we had to ensure this could be a fully functioning, and fully floating, watch kiosk with a build time of less than three weeks. It took a lot of tweaking to get it perfect but thankfully we had experts who knew exactly how to make it happen (and safely). 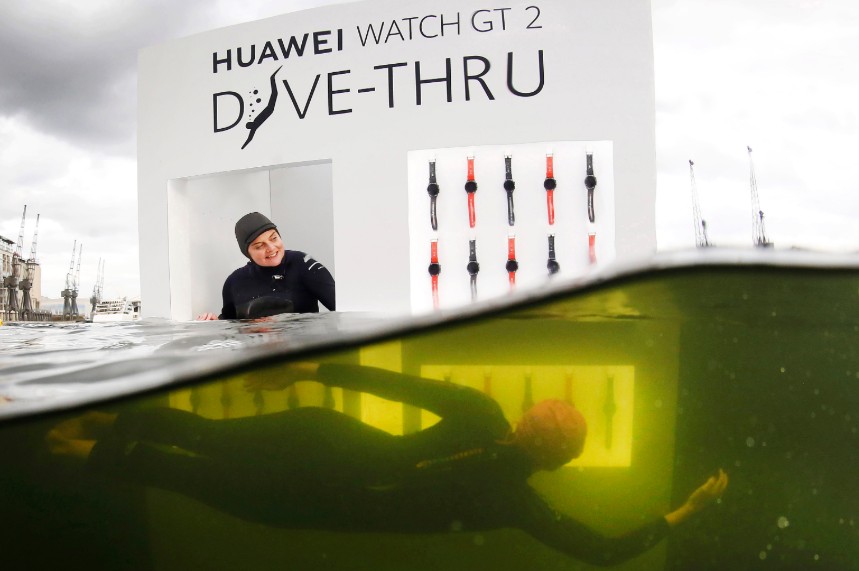 Huawei is known for creating outstanding smartphones but we needed to highlight how its tech capabilities and innovation stretch far beyond phones. Initial success was judged on showing the public Huawei has a range of excellent products beyond just smartphones, using the Dive Thru to highlight a key capability of the Huawei Watch GT2.

We had over 250 people in the queue with the first arriving at 7am… a full five hours before the Dive Thru opened! Those in the queue had heard about the event through earned or shared channels and were desperate to get their hands on the device. Qual research on site showed how their understanding of Huawei had changed after seeing the Dive Thru.

Our job is to relate to the public and whilst you can engage the public through media coverage, influencer outreach, sign ups to a microsite, likes on a social post etc. You know that you’ve truly succeeded when you’re having a chat to someone who has travelled through the night to be the first to your event.

You cannot underestimate the power of getting face-to-face with consumers, this activation allowed us to do exactly that.

Hundreds turned up to the open day, from as far as Newcastle, Leeds and Southampton, all there to plunge into the icy depths of the Royal Victoria Dock to get their hands on a Huawei Watch GT2. This highlighted the desire for the Huawei brand and the lengths the public were willing to go to get their hands on innovative technology.