Bud Light’s Super Bowl LIII commercial slammed rivals Miller Lite and Coors Light for including corn syrup in their beers’ ingredients. One day later, just as what has now been dubbed the "corntroversy" was born, Michelle St. Jacques started in her role as U.S. CMO for MillerCoors, which recently rebranded as Molson Coors.

Her initial 90-day plan as the company’s first female CMO, unsurprisingly, did not include what happened that Sunday night.

"You saw everybody from everywhere come together to defend our brand after that moment; whether that was the employees, our distributors, our farmers or our consumers, it aligned everybody behind a common goal," she says.

From a marketing perspective, the situation showed St. Jacques how fast the company could move and the bold ideas it could bring to market.

Within 24 hours of the Super Bowl, the former MillerCoors took out a full-page ad in The New York Times to defend itself after Bud Light’s spot. A bout of back-and-forth banter continued for weeks from the competing brands, starting humorous then escalating to a legal battle between the brewing companies.

But after a while, the brand wanted to shift the conversation back to the company’s story, which is about giving consumers "more taste," St. Jacques says.

In March, Coors Light created a smart beer tap that listened "for Bud Light negativity" and literally lit up whenever it sensed antagonism, gifting nearby patrons free beers. For March Madness, Molson Coors clapped back against Bud Light with a series of NCAA Tournament ads — claiming that "in the real world," consumers prefer more taste.

"I loved the speed, the boldness, being true to what our brand stands for and that we were able to stand out in the marketplace," says St. Jacques. "A lot of those principles are the things we are now building as the pillars of our marketing vision for the future of the company."

As it prepares for Super Bowl LIV, the company is challenging a lot of the things it has typically done from a marketing viewpoint.

"We have taken a differentiated role on how we are viewing the importance of earned [media] from an overall marketing perspective," says St. Jacques. "This isn’t just about Super Bowl, it is about how we are continuing to evolve our marketing vision and changing the way we are bringing our brands to life to more effectively deliver the business results we need."

For the upcoming Super Bowl, she predicts brands will continue to take bigger stands on social issues or tout their purpose points. As in recent years, brands will also likely try to "hack" their way into the conversation through differentiated marketing approaches, she adds.

"[Brands] go big or go home," she explains. "It is not the time, given the investment, to play it in the middle. It is a time, if you are going to do it, that your creative needs to break through the clutter with something completely unexpected."

We have to think clearly about what we are trying to communicate to consumers when they are holding our product in their hand.

Speaking generally about the upcoming year, the company has a clear vision to build brands that more people want to hang out with, says St. Jacques.

"We view our job as being to ruthlessly recruit the next generation of drinkers into our brands and our category," she says.

"The scope of the role has grown by expanding to a North American footprint, but we will continue to focus on our marketing vision," she says.

Previously, St. Jacques was SVP and head of global brand and capabilities at Kraft Heinz. Before that, she held various leadership roles at Unilever, including running the global Dove body care business. Having worked at CPG companies, she notes beer is different because it says something about the person who is holding it.

"There is a self-expression aspect to it," says St. Jacques. "We have to think clearly about what we are trying to communicate to consumers when they are holding our product in their hand. We are trying to be clear about why the heck we matter and what we stand for."

The next generation of drinkers has what St. Jacques refers to as "beer blindness," with many younger consumers writing off commercials for the product as Big Beer. As a result, beer brands must work harder to earn their attention.

Upon creating a new marketing strategy for Coors Light last year, the team focused on the fact young people are "always-on."

"We wanted them to actively start choosing to chill out and find moments to turn off," says St. Jacques. "From a consumer perspective, that is an emerging need state. We wanted our product to be the perfect antidote to a world that is always-on."

With that idea in mind, Coors Light’s Made to Chill campaign was born in July. St. Jacques says the campaign breaks all the rules of typical beer advertising. Instead of showing the beverage being enjoyed on a rooftop, it is shown in solo or at-home occasions. The brand is taking fresh approaches to connecting with different consumer targets, such as women and Hispanics. 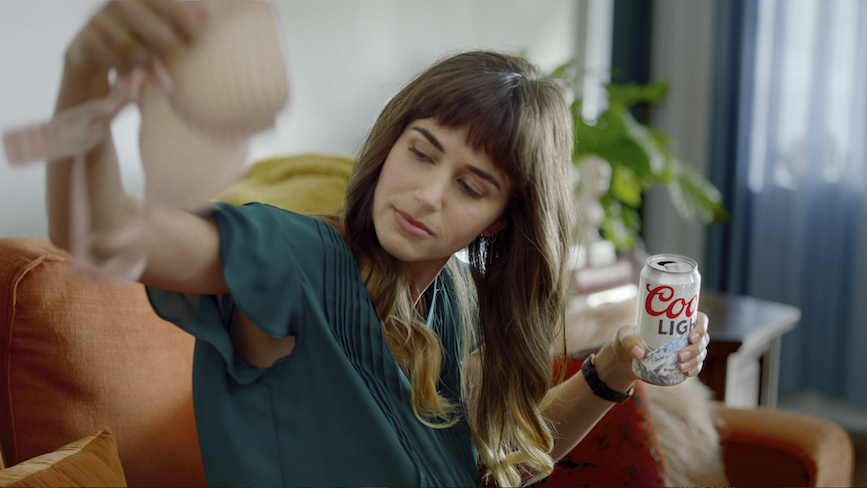 Coors Light’s Made to Chill campaign encourages consumers to ‘chill’ and enjoy the beverage at home.

"Right after the launch, 80% of people who saw it in social tagged their friends or self-identified as ‘That’s so me,’" says St. Jacques. "We are starting to see the results come to play out in market and seeing a shift in performance."

Molson Coors is also accelerating its focus on innovation to reach new consumers. For 2020, the company’s innovation pipeline is twice as large as it was last year. On average, she says an innovation has taken 24 months to get to market. Recently though, the company has whittled that time down to four months in some cases.

"We are putting a premium on expanding into new areas that align with consumer trends we are seeing," she says. That includes investing in non-beer beverages. In 2019, it launched a canned wine spritzer called Movo in test markets that it is releasing nationally in 2020. La Colombe Coffee Roasters has also teamed with Molson Coors on a low-alcohol, cold-brew coffee line that is being tested in select U.S. cities.

In June, Miller Lite launched a Twitch channel and created the Cantroller, a beer can that doubles as a gaming controller.

"That connected us with a totally different audience that is difficult to reach in traditional media," says St. Jacques.