The landmark ruling upholds complaints that seven Instagram posts were promoting e-cigarettes in the UK unlawfully and clarified that Vype's social-media accounts – such as @GoVype, run by BAT – are not analogous to a website. Therefore, neither factual nor promotional content for e-cigarettes is permitted.

In the UK it is lawful for websites owned by e-cigarette companies to provide factual information about their product to an adult audience, but the online advertising of e-cigarettes is banned in all countries in the European Union.

In its defence, BAT said its online communications aimed to "impart factual information regarding their products but stopped short of direct or indirect promotion".

In its ruling the ASA said: "In each of the ads an unlicensed e-cigarette was prominently featured with the brand name Vype appearing in several places. Each ad also contained text which stated 'Vype e-cigarettes contain nicotine. 18+ only. Read leaflet in pack', which indicated that the products contained nicotine. We therefore considered the ads directly promoted unlicensed nicotine-containing e-cigarettes and consequently the restriction that applied to online media." 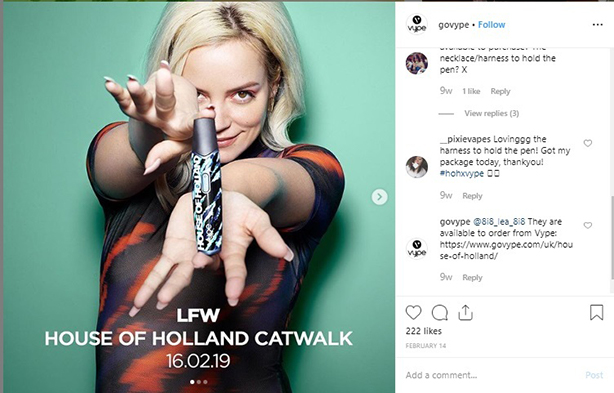 The decision has been welcomed by anti-tobacco groups. "The ASA's ruling is a huge step forward in preventing tobacco companies from using social media to advertise to young people in the UK and around the world," said Mark Hurley, director of international communications at the Campaign for Tobacco-Free Kids.

"While the ASA ruling is great news, urgent policy change is needed from Facebook, Instagram and Twitter to prevent BAT and other tobacco companies from using social media to advertise their harmful products to young people around the world."

Deborah Arnott, chief executive of Action on Smoking and Health (ASH), added: "The law has always been clear that any advertising of e-cigarettes online is not permitted. BAT's defence that all it was doing was providing 'information' on social media, not promoting its products, has been blown out of the water. The ASA ruling leaves no doubt that BAT's social-media tactics for Vype were both irresponsible and unlawful, and must never be repeated."

Posts to the accounts sometimes feature celebrities, fashion houses such as House of Holland, and social-media influencers using Vype products.

According to the Campaign for Tobacco-Free Kids, BAT has paid influencers younger than 25 to promote Vype on social media in Colombia, Guatemala, Italy, Mexico and the UK, despite a clear internal policy banning their use.

Earlier this year, BAT confirmed to PRWeek that it used social media to focus on "developing compelling collaborations that we believe will generate earned social-media coverage, which appeals to adult smokers and adult users of potentially reduced-risk products".

BAT's group head of corporate affairs, Simon Cleverly, told PRWeek in April: "If we're going to transform the tobacco marketplace and make adult smokers aware of these new products, we need to communicate via the channels that they are using. As such, for these potentially reduced-risk products, social media has an important role to play."

This new ruling by the ASA could scupper these tactics, according to professor Anna Gilmore, director of the Tobacco Control Research Group at the University of Bath.

"This is a major step forward in stopping the tobacco industry from promoting its new addictive products to children and teenagers. But given that cigarette sales are falling and tobacco companies are desperate to recruit young people into using these new products, ongoing vigilance is essential," she said.