PRWeek approached industry leaders this morning to share their views about the Conservatives' stunning win and what it says about political communications.

Some believe comms professionals need to do better at calling out and condemning the unethical practices that have been a feature throughout the campaign.

Another consistent takeaway is the power of clarity and a simple, clear message – or, as one agency boss put it, "simplistic populist lines".

On the positive side, Brexit uncertainty should now end as we move into a politically complex and challenging decade.

Here is what the industry leaders had to say.

Is the result what you expected?

Mark Borkowski, founder, Borkowski PR: For a long time, I've known that moderates across the country were in trouble, but I didn't realise that it would get this bad, this fast. We have handed our country into the hands of people who are willing to go to dark lengths to win. In this campaign they have made promises and then edited them out of the recordings, they have posed as fact-checkers, they have mashed up footage of opponents to completely misrepresent them and they have been rewarded beyond their wildest expectations. As much as I regret that Johnson has been rewarded for his behaviour, I have to hold out hope that Corbyn is forced to take responsibility for guiding his party into disaster.

Jo-ann Roberston, partner and chief executive, Ketchum: Yes and no. I predicted a Tory majority of around 30, but never anticipated some of the Labour losses, with Bolsover standing out as an incredible moment.

Warren Johnson, founder and CEO, W Communications: Yes. There’s no coincidence that the Conservatives had a single-minded strategy and message, ‘Get Brexit Done’ and stuck to it. They’d done their research, had a firm plan and saw how the Remain candidates would cannibalise each other; the Brexit Party would decimate Labour in its traditional heartlands, giving the Conservatives a considerable majority. It worked with the result we see today.

Sarah Waddington, managing director, Astute.Work: Our industry of professional communicators failed to unite with one voice to condemn unethical practice and the use of disinformation within the general election, so not one of us should be surprised by the result. This has been one of the biggest disappointments of my entire career.

Nicola Green, director of communications and reputation, O2/Telefónica: I thought this result was at the higher end of what was possible – but it depended on an effective campaign from the Conservatives to get the relevant waverers over the line in the final days. The margin per seat between landslide and hung parliament was reasonably small, and tailored comms with the right people will have been part of the difference.

Lauren Branston, founder, Lauren Branston Consultancy: My expectation was that Boris Johnson would win, but not the extent of the Labour loss, which has surprised many – although, with hindsight, it was always a possibility. To some extent it means that Boris might be able to, in the words of George Osborne last night, return to his "big general liberal instincts". He certainly doesn't have to be hostage to the ERG any more, so I think the question now is: will the real Boris Johnson please stand up?

Arlo Brady, chief executive, Freuds: Yes, I did expect a Conservative majority, although not a landslide. In all honesty, I think that result has more to do with the weakness of the opposition – specifically that of the Labour Party and its leadership – than the strength of the Conservatives. 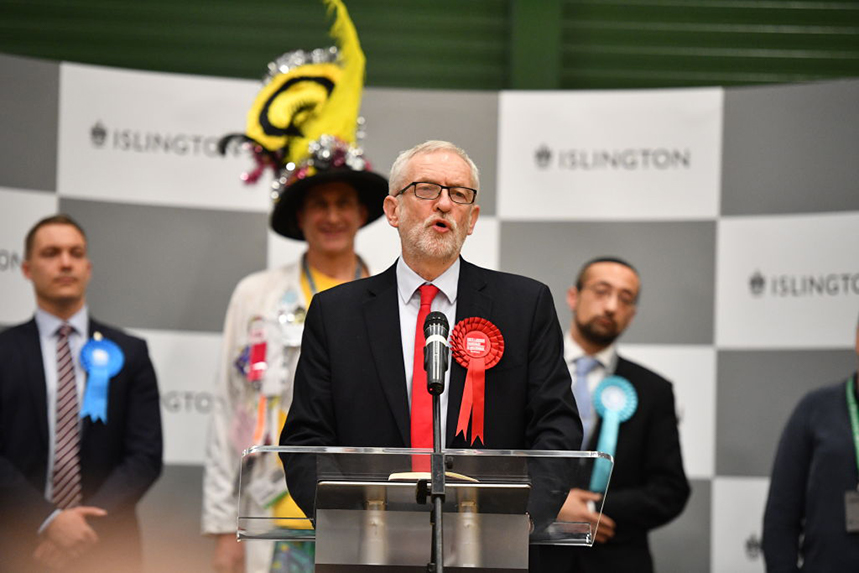 Jeremy Corbyn has been labelled 'out of touch' and his messaging convoluted and lacking clarity. (Photo by Leon Neal/Getty Images)

What are the major communications lessons to be learned?

Arlo Brady: In a world of complexity and uncertainty, simplicity of message resonates. Like it or not, "Let's get Brexit done" was very effectively communicated at every available opportunity. Moving forward, rather than hitting pause (for longer) or going backwards, is always the natural human instinct that wins through – even if that forward motion might not take you exactly where you had intended to go. The second thing to note is that hive mentality is almost always toxic. It's clear to me that the Labour Party and Momentum are out of touch with the country – and, as with many large corporations, when you are inside an echo chamber it is easy to be confident and secure in your own logic, and it is very hard to challenge leadership.

Jo-ann Robertson: In the current environment simplistic, populist lines get cut-through without much substance. However, if we are to have more meaningful political discourse it is critical that the British political parties have deeper, more complex policies that are economically sound that they then communicate in an engaging and easy-to-understand way. In a morally and politically bankrupt system this is the only way to rebuild trust in politics.

Mark Borkowski: We are animals with Stone Age brains, mediaeval political power structures and god-like technology, and the technology is winning. We have already reached a point where international tech cannot be taxed by national governments, we are reaching a place where they can't be regulated, and we have to worry about what that unchecked power would look like. Perhaps I'll ask Alexa.

Lauren Branston: There two lessons for me: the importance of clarity and the importance of character. The clarity of the Tory message 'Get Brexit done' had insight and cut through. And in the age of fake news and the decline of trust, character is a critically important factor in reputation. What we are hearing today is Corbyn was an even bigger issue on the doorstep than Brexit. And that's when the result, with hindsight, was always a possibility, even if Corbyn's policies had the potential to resonate with the 'many not the few', his leadership didn't and his messages lacked clarity; too many policies, not clear on Brexit.

Nicola Green: I think it's the trade-off between earned and owned media. There's clearly a trend of political parties cutting out journalists in the middle, and speaking directly to voters on the channels they own. This is effective as a campaign technique, but there are implications for scrutiny and trust in politics if the balance is too one-sided. This is something corporates should consider too: a balance across channels is the healthy way to go.

Sarah Waddington: The lessons are stark. Public trust is being eroded and we need to reverse the damage immediately. Lobbying the government to legislate so digital campaigning is covered by electoral law is key.

Warren Johnson: The two main parties had both been going out with completely different messages and agendas. Boris Johnson parroted ‘Let’s Get Brexit Done’ all over the country and Jeremy Corbyn talked about exclusively social and welfare change, avoiding Brexit like the plague. Neither seemed keen to engage on the other’s key issue. The other notable point is the amount of misinformation spawned and spread across social media, which was often picked up and repeated as fact by mainstream news and political parties. It became increasingly challenging to determine what was fact or fiction and whether politicians cared if they repeated untruths as long as they knew it would give them a boost. 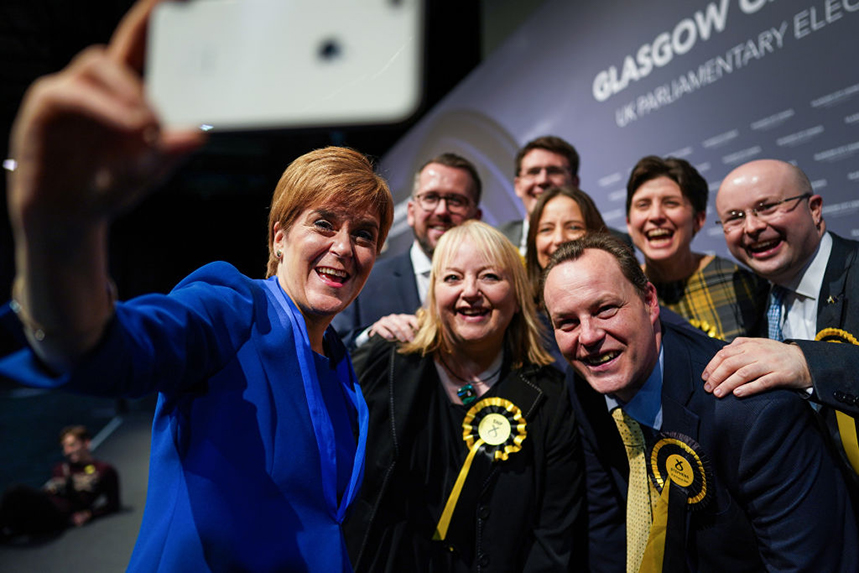 The SNP's Nicola Sturgeon is the other major winner. Her campaign messaging has been focused and she won key debtates. (Photo by Jeff J Mitchell/Getty Images)

What do you think the result will mean for communications in your sector?

Jo-ann Robertson: Brexit uncertainty will end and businesses will need to proactively deal with the consequences. The domestic policy agenda will be rich and fast-paced so, in order not to be blindsided, business will need to proactively engage after years of slow-to-non-existent policymaking. We are moving into a complex and challenging political decade and it is on all of us to try to protect the economy as much as possible.

Warren Johnson: Whether we or for or against the change of direction, the most likely consequence is a period of stability. It is only a matter of weeks ago where Parliament was spasms of dysfunction, a People’s Vote was still on the table. Clients were uncertain of what it meant for their businesses, investors didn’t want to speculate on the course the nation was taking and budgets were being mothballed. It made planning for the future practically impossible. At least now, we have some clarity.

Lauren Branston: It's still hard to predict exactly what will happen now on Brexit – although the deadlock will lift, Brexit is far from 'done'. People working in public affairs are going to be busy. Over the past few years, Westminster has been tied up with Brexit and other regulation has been on hold. We need to prepare for things to start moving – for regulation to pick up, but also to be ready for continued uncertainty and surprise. The Tory manifesto was frankly light on detail and Boris Johnson has a considerable majority and a lot of power as Prime Minister; let’s see where he decides to go. I for one hope that, in the words of Jo Cox, he can see an opportunity to bring us together after three years of division, and think about how we have "more in common than that which divides us".

Nicola Green: You've now got a Conservative Government which needs to get runs on the board for its domestic agenda if it wants to hold onto former Labour voters who have lent their vote this time round. The telecoms sector can help government with projects for the public good like improved rural coverage, better urban connectivity, a greener economy and better public services. But it can't just be policy behind the scenes. We have to get out there and communicate in the public sphere that we're willing partners or things won't happen quickly enough.

Mark Borkowski: As the media landscape continues to increasingly fragment, it is vital that we all learn from the lesson of Corbyn's disaster. By staying in London, by listening to only a few favourable voices, by refusing to shatter outwards from the bubble – he has turned ex-mining villages Blue. He has handed the working class to the Conservative Party by chasing after a surge of young people. We must all look beyond our bubble, we must all seek out and listen to opinions, and we have to ensure that we never fall for the hubris given by yes-men.

Sarah Waddington: As a comms industry we now have an urgent duty of care to understand the news cycle today and how narratives can be shifted as per the Trump playbook. We need to take a stand on racism and antisemitism to ensure inclusivity. Until we have a handle on these things, ethical communicators will continue to be hopelessly outplayed and stand no chance of achieving cut-through. Worse, huge swathes of our community will continue to feel politically homeless and like they have no voice – a pretty bleak outlook.