There's no doubt big set-piece events give us unparalleled opportunities to funnel creativity.

So, with the general election and Christmas happening within weeks of each other, it's no surprise we've had another bumper week of creative hits and misses…

First to the election. At time of writing, the result is still to be determined, but that doesn’t stop us drinking in the creative glories that have beset this unusually festive campaign.

Talking of drinking, hats off to BrewDog for another punchy effort this week. At a time when 'purpose' is alive and kicking, it's good to see companies that are willing to put their money where their mouths are and take a commercial hit for a commercial hit.

The brewer has done its bit for democracy and offered free pints to anyone who voted on Thursday. 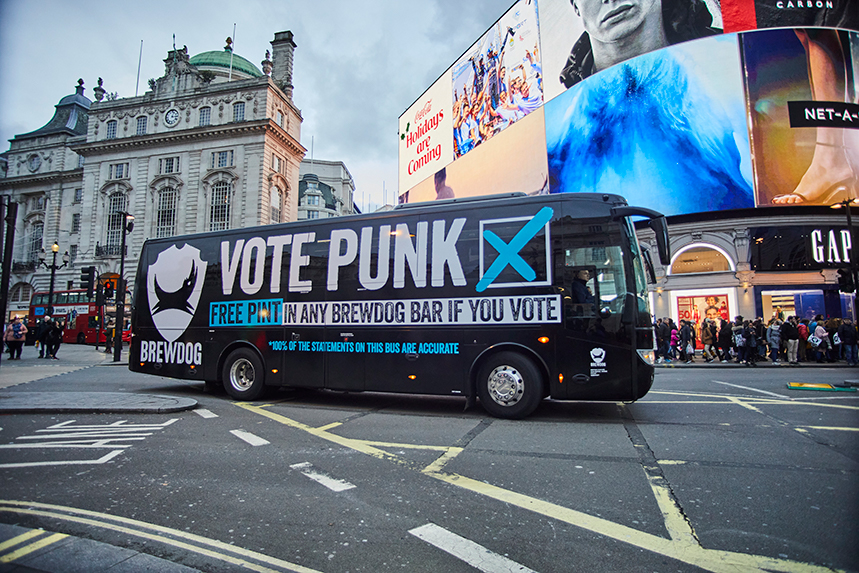 In a similar vein, Uber is offering all NHS workers free lifts or Uber Eats this Christmas period.

And Deliveroo is supporting midwives through its own Christmas campaign.

Elsewhere, but with no brand involved, Banksy this week showed how it's done, with an impactful art installation in Birmingham shining a light on homelessness this Christmas.

Reminiscent of other Banksy works on the West Bank's separation wall, this latest piece tells a compelling story of our time and shows how simple, timely creative has the power to stop us in our tracks and make us think twice.

It's been another bad week for Peloton, which has been widely derided for its 'creepy' exercise bike film. In a story that just keeps running (or riding), the fitness company is now being trolled by its lead actress.

In a stunning coup de grâce, Ryan Reynolds' Aviation Gin hired the Peloton film's leading lady, Monica Ruiz, to star in a tongue-in-cheek ad where she, quite literally, drinks her sorrows.

Bravo Aviation; newsjacking at its absolute finest. A month to forget for Peloton.

Success is always short-lived. Just as John Lewis now (arguably) struggles to meet the high expectations of its annual Christmas ad, so Spotify might need to look again at how it keeps its Spotify "Wrapped" concept, launched again this week, fresh.

This year saw a recap of the decade; finding ways to keep an annual franchise surprising is probably a nice challenge to have, but a challenge nonetheless.

(That hasn't stopped other brands from capitalising; such as this cute execution from Nando's.)