In alphabetical order, today the first consultancy in our shortlist is… Citypress.

Back in 2011, Manchester-based Citypress had an annual fee income of £2.5m and 39 PR staff, which made it the 76th biggest consultancy that year. Although it was well-known locally, it had yet to make an impact on the wider British PR industry.

According to PRWeek’s most recent league tables the agency now enjoys a turnover of at least £8.25m and sits 43rd in the table. Moreover, it employs 85 staff across four offices also including Birmingham, Edinburgh and London.

Charles Tattersall took over as chief executive in 2013. He took on the mantle from his father David, who had first founded the firm as a regional news agency in 1961. Together with his wife Donna, and board director Martin Currie – and a diverse and growing leadership team - Charles Tattersall has transformed the consultancy into a broad-based, national force.

In recent years Citypress has won Best Agency HQ’d Outside London at the PRWeek Awards, along with a handful of other gongs.

It has also done extremely well in our Best Places to Work scheme, taking home Gold for Best Mid-Sized Agency in consecutive years – 2017 and 2018 – with judges highlighting its "enlightened approach to employee welfare". 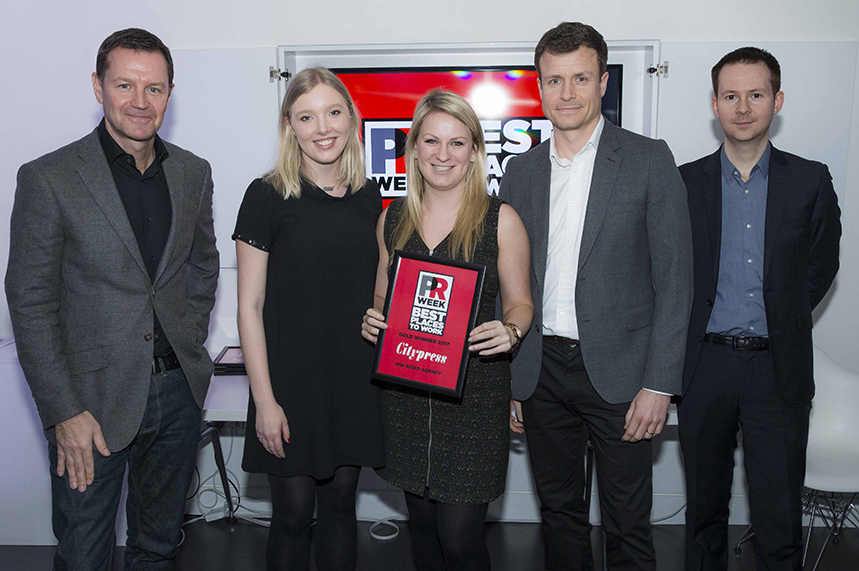 Beyond the PR industry, the agency regularly features in the Sunday Times Best Small Companies to Work For.

If you visit Citypress’ Manchester HQ you quickly get a sense of a vibrant, innovative, creative – and above all – progressive, modern comms consultancy. The agency’s current roster includes Unilever, Aldi, British Gas and Lloyds Bank. To its great credit, Citypress has managed to both represent blue chip firms, from a network of regional offices, as well as serve more classically local business.

Rumours abounded a few years ago that Citypress’ sale to a big marketing services group was imminent. But PRWeek is now relieved that the agency has remained one of the country’s leading independents – and with a unique culture to match.