André Van Loon, senior research and insight director at We Are Social, said: "If you were to go by the number of social-media followers only, you would say that Labour has the GE 2019 in the bag."

"However, looking at the social-media data in more detail, an entirely different picture emerges – and one that is far from comforting to Labour. The Conservative Party, despite its lower social audience size, is far ahead on most other metrics," Van Loon said.

"If you treat the social-media followers of the political parties as representative samples of the larger voting population (samples, it should be stressed, that are much much larger than traditional polling samples of around 1,000 people) – then the Conservative Party looks certain to overwhelm all the opposition parties on 12 December."

The challenge for Labour is whether it can translate its social-media follower base and strong levels of social-media engagement into votes at the ballot box.

Van Loon commented: "With just over a week to go until the country goes to the polls, Labour on social media appears uncharacteristically weak, almost as if their heart isn't in it; the Conservative Party appears an overwhelming force on social media – a force that is, almost miraculously, neither defined nor restrained by the Brexit issue."

Labour dominates on this score, with 37 per cent of the audience. The Conservatives are second with 24 per cent, and the Lib Dems have the smallest following, putting them at the bottom of the table, with eight per cent, just below the Brexit Party. 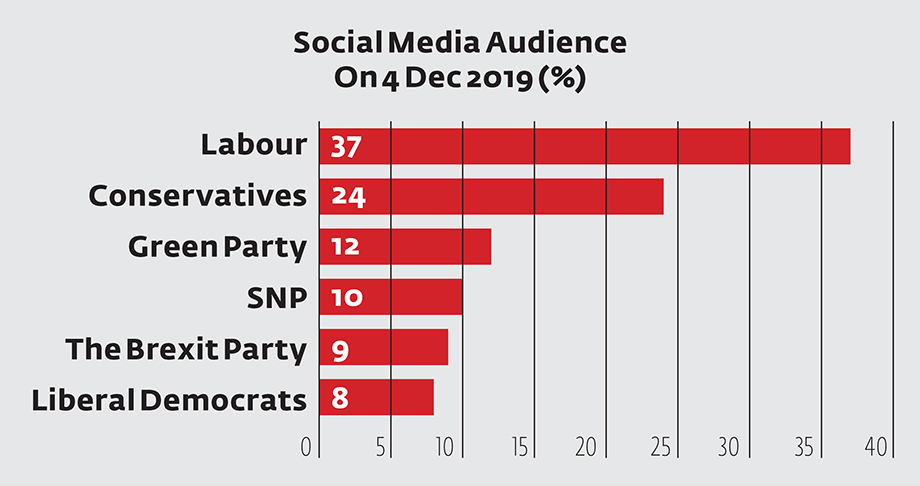 Across all the parties tracked, the Conservatives put 2,000 posts on social media, more than any other party and far ahead of Labour's 1,350 posts. The SNP have been the least active on social media. 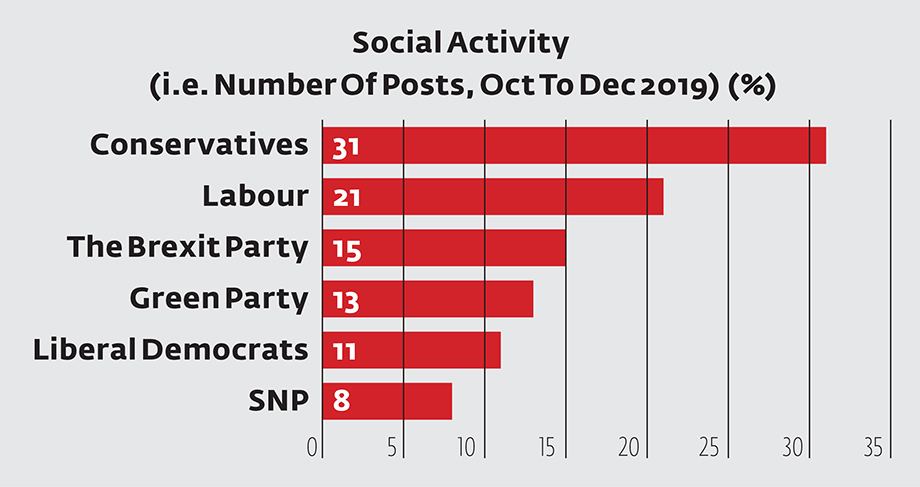 The Conservatives are in front, at 37 per cent, with Labour in second place on 30 per cent. The best-performing posts for the Conservatives have been a Halloween post warning against a Corbyn government, and a 'law and order' post after last week's London Bridge terror attack. Of its top 10 most-engaged-with posts, only two are about Brexit.

The most-engaged-with posts for the other parties often play to their respective strengths – for example, the NHS for Labour, Extinction Rebellion for the Green Party, and Scottish Independence for the SNP, and Nigel Farage for the Brexit Party. The Lib Dems' #StopBrexit agenda hasn't gained much social-media traction, according to the analysis. 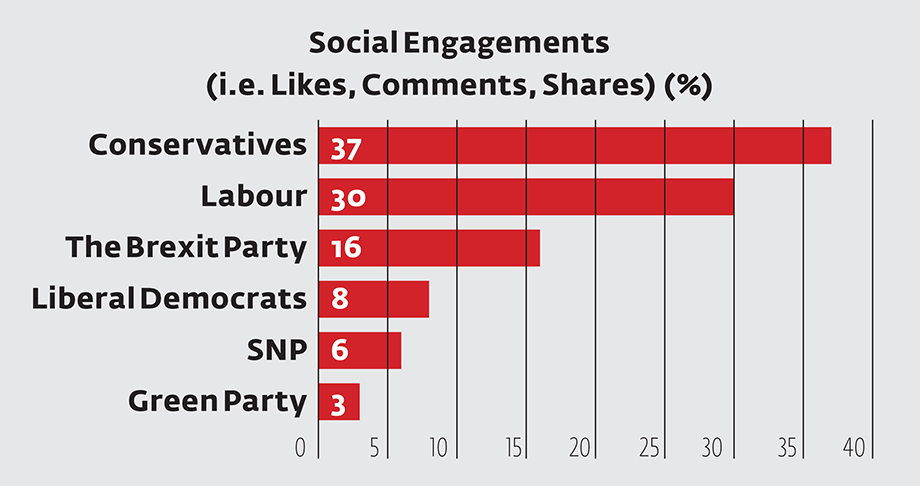 The number of engagements in proportion to the number of followers shows that the Brexit Party is by far the most effective in engaging with its supporters on social media, with a rate of 1.31 per cent. The Lib Dems are in second place, on 0.89 per cent, followed by SNP on 0.64 per cent.

The Conservatives (0.53 per cent) and Labour (0.4 per cent) are in fourth and fifth places respectively, with the Green Party the least effective at engaging with its followers, with a rate of 0.17 per cent.

Despite its dominance in terms of connecting with its followers, the Brexit Party does not have a large enough support base to make an impact on the mainstream parties, according to the analysis. 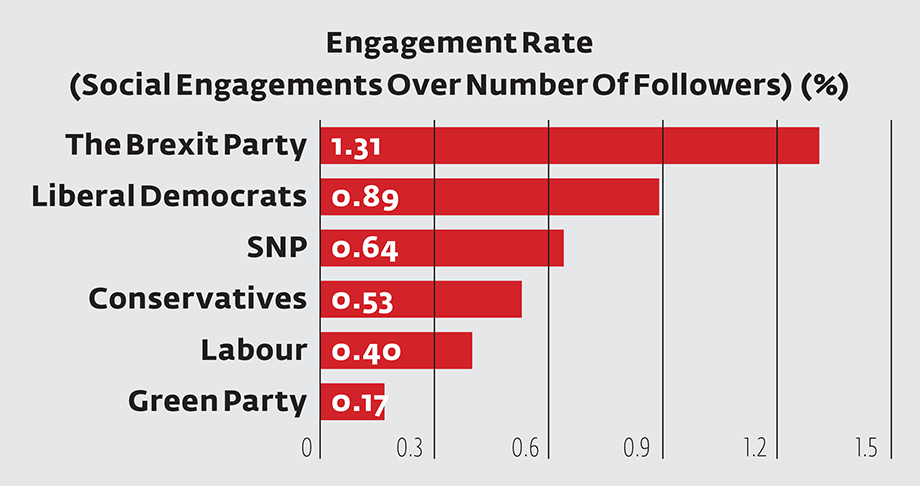 When it comes to people giving a thumbs-up to social-media posts, the Conservatives come out on top, with 37 per cent. Labour are in second place, with 29 per cent, followed by the Brexit Party on 17 per cent. The Green Party is bottom on this measure, with just three per cent of positive reactions to posts. 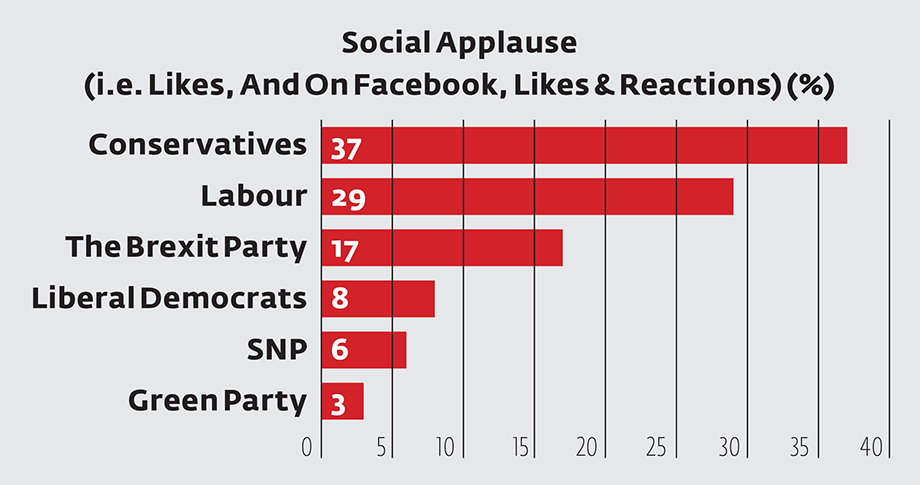 Labour leads on the number of users sharing or retweeting the party's posts, with 36 per cent of the total, but the Conservatives are not far behind, on 33 per cent. The Brexit party is third, with 15 per cent, while the Greens are in last place, with just two per cent. 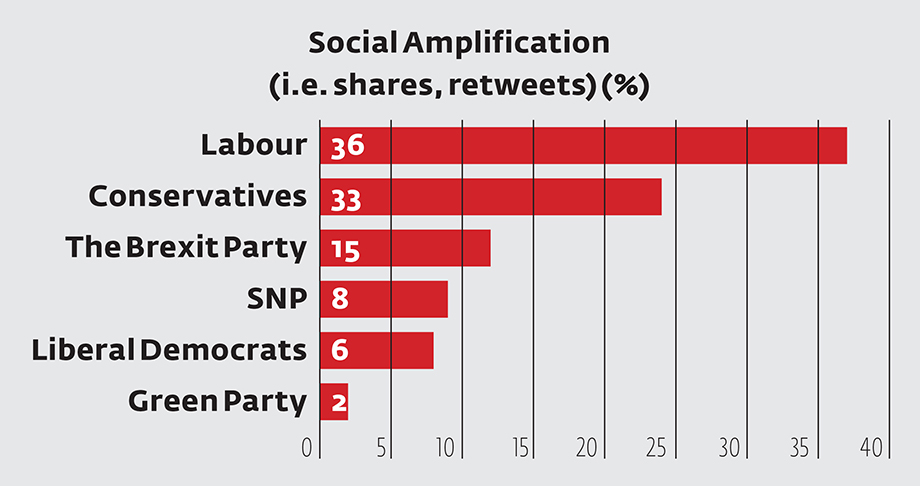