Oluwole felt compelled to take up the Remain cause over fears "my country will never be good again" if the narrative that had delivered the referendum vote in favour of Brexit was allowed to play out unchallenged.

He co-founded the Our Future, Our Choice movement and has become one of the most high-profile and credible voices in the Brexit debate, growing his support base from just 20 followers of his @Femi_Sorry account on Twitter in 2016 to more than 243,000 today, and is regularly interviewed by the media on the issue.

But the journey has not been easy for the law graduate-turned-activist.

Speaking at the BME PR Pros conference last week, Oluwole opened up about why he took up the cause, the personal toll it has taken on him and the brilliant communication techniques he uses to debate Leave supporters.

"Fortunately, I had just moved out of there and my parents had also just left, so it's fine now, but we do not live in a great age in terms of the way people talk to each other," Oluwole said.

When asked by a conference delegate how he looks after his mental wellbeing, Oluwole said: "It has its ups and downs. It's not great, but you are reminded that unless you want to be permanently stuck in a position where that is the norm, we have to push back against it constantly.

"One of my most difficult moments was when the chairman of the Brexit Party decided to sue me because I called him out for antisemitic tweets," he said.

Oluwole managed to avoid court on that occasion and has gone to great lengths to look after his wellbeing.

"The biggest thing I've done to take care of myself was moving out of London. I was born in the North East and grew up mainly in Birmingham, I'm not a 'big city' guy," he said.

On 16 June 2016, then-UKIP leader Nigel Farage unveiled the infamous 'Breaking point' Brexit poster, which used a photo of a huge queue of migrants – who were in fact trying to cross the border between Slovenia and Croatia in 2015 – and implied that they were marching on to the UK.

Political leaders across the spectrum widely condemned the "xenophobic" and "distatestful" stunt, but what was less discussed was its factual inaccuracy.

As the UK is not part of the EU's quota system and common asylum policy, none of the refugees pictured had any right to enter the UK under EU law.

"As a narrative that doesn't make sense, so he's chosen people, [to appear] vagrantly, to carry his message back to the people he is trying to reach. That makes it objectively a racist marketing decision."

Four days after the poster launch, Oluwole set up his Twitter account and decided to take up the Remain and people's vote cause.

"My first thought was 'my country will never be good again', because I thought if this narrative won, what kind of country do we live in?" he said, adding that the Brexit debate had very few representatives from BAME backgrounds.

"One of the reasons I wanted to speak out was to remind everyone, and in particular ethnic minorities, that this was still our country too." 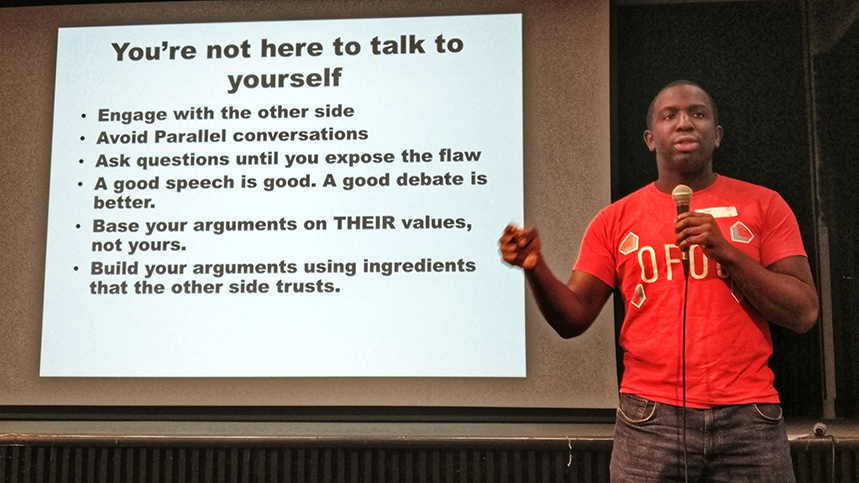 When he took up the cause, Oluwole noticed the Brexit debate had been missing facts, the effective communication of these facts, and empathy towards the other side of the debate.

Sadly, this trend has escalated, with Brexiteers and Remainers increasingly polarised, spiteful and constantly shouting at each other on social media, in politics and in the media.

To overcome this paralysis, Oluwole has adopted a communications approach that starts out by finding the intersection points in the Brexit debate, seeking common ground, and then contesting an argument by using facts in a way the other side (in this case, Brexiteers) can relate to.

"Brexit is largely a battle between economics and sovereignty," he explained. "You have one side screaming: 'Take back control of our laws', and the other side screaming: 'This will makes us economically poorer' – and nobody was talking to each other.

Another subtle tactic he uses to appear more relatable is wearing T-shirts, even on TV, because he realised people are "sick of experts in suits" driving the Brexit debate.

He is also quick to point out that Brexiteers are not stupid (a common trope on social media).

"People are not educated on either side of the debate… but I have to spend most of my time explaining to Remainers what the single market is," he said.

It is Oluwole's hope that enough Brits vote tactically in next week's general election to stop the Conservatives from retaining power.

He warns that if the Conservatives win, there could be at least 10 years of negotiations with the EU, and the genuine threat of the country crashing out without a deal that anybody will back.

"Even if we left the EU with Boris Johnson's deal on 31 January and we have until the end of next year to negotiate our new relationship with the EU, there is zero guarantee at all we end up with a deal that the original 52 per cent want.

"There is no majority for any specific version of Brexit. Why? Because if you give people the choice of literally any other version of our relationship with the EU, you are going to get people that want incompatible things.

"Stopping Brexit by means of a democratic referendum is, in my view, the only way forward, and that requires Boris Johnson to lose that election," he said.