Sir David Attenborough’s name is usually preceded with the words ‘national treasure’, but that does him a Planet Earth-sized disservice – framing him as a loveable, veteran TV presenter whose primary function is to showcase wildlife to new generations as they sit at home, wide-eyed on a comfy sofa.

It’s become clear that – perhaps driven by his advancing years – underneath this softly spoken man’s exterior lies a ruthless campaigner, fearful that time is running out, both for him and the world as we know it. And he wants viewers to be decidedly less comfortable in their front rooms.

This month the 93-year-old, alongside the BBC’s Natural History Unit, received the prestigious Chatham House Prize, given to people or organisations 'making a significant contribution to improving international relations'.

The award was for Blue Planet II's highlighting of plastic pollution, which 'spurred a passionate global response and generated clear behavioural and policy change'. However, in the current BBC series Seven Worlds, One Planet, we see this message subtly moved into the "heart" of each episode, rather than tagged onto the end.

Examples abound of how mankind's behaviour is dramatically affecting the natural world, threatening species and habitats – the most stark being footage of an orangutan alongside a bulldozer as it destroys the primate's home in the pursuit of palm oil; and, perhaps even more disturbing, 100,000 walruses crammed onto a beach (some becoming suicidal) because their ice has melted. 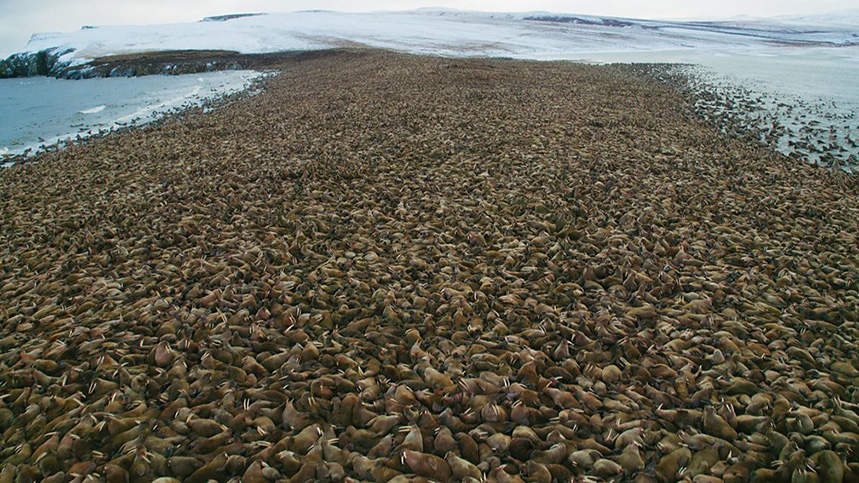 Seven Worlds, One Planet broadcast shocking footage of 100,000 Pacific Walruses forced onto a beach in Arctic Russia because of climate change (©BBC)

David Attenborough is not messing about this season. He’s like "climate change is melting all the ice and all these animals are displaced now here’s a walrus throwing itself off a cliff to escape a polar bear." ?? #SevenWorldsOnePlanet

The BBC's Natural History Unit wields unparalleled influence, with Seven Worlds, One Planet being broadcast in more than 235 territories, globally. A quick search of 'orangutan seven worlds' online brings up reams of news coverage linked to the aforementioned scene, from every corner of the world.

At the series launch, Attenborough said: "Our influence is everywhere... we have it in our hands but have made a tragic, desperate mess of it so far."

But, speaking at the Chatham House event more recently, his mood was noticeably more positive: "I think we're all shifting our behaviour, I really do," he declared. "I think we are changing our habits, and the world is waking up to what we've done to the planet."

Perhaps, finally, his messages are getting through. Time will tell if it is too little, too late.