The social media platform has become a propaganda weapon of choice for campaigners across the political spectrum.

A PRWeek analysis of Facebook’s reach compared to official population data illustrates how quickly and cheaply the platform can be used to target political messaging to swing voters in vulnerable seats.

Who's behind the obscure groups funding election attack campaigns on Facebook?

Facebook, which has the most sophisticated targeting ability and claims to have the largest reach, has also taken the decision not to police political advertising, which means it can be used to spread political misinformation without fear of retribution from major political parties and a myriad of new, somewhat shadier groups posting political ads on behalf of parties.

So far, vast sums of money have been spent on political advertising on Facebook and Instagram. The official accounts of the Conservatives, Labour Party, Liberal Democrats and the Brexit Party spent more than £225,000 on Facebook ads in the past week and £1.6m in the past year, according to Facebook’s Ad Library, which provides transparency on who pays for political advertising. 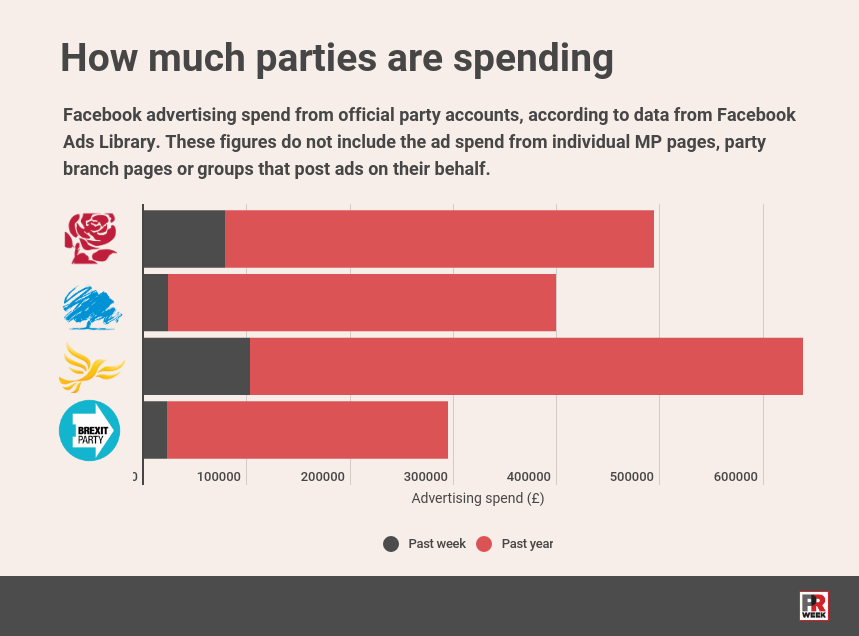 These figures are likely to be a conservative estimate because they do not include ads posted by individual MPs, party branch pages or affiliated groups like Working4UK or Parents' Choice, which often post political ads on behalf of parties.

The Conservatives’ messaging is largely negative and focused on attacking Jeremy Corbyn and political rivals, while Labour’s is more aspirational – selling its key election promises, such as keeping NHS prescriptions free, a real living wage and the ‘Green Industrial Revolution’.

The Liberal Democrats have a mixture of ads promoting it’s remain positioning and tactical voting ads that claim it is the only party that can stop Jeremy Corbyn and Boris Johnson. The Brexit Party’s posts are about ‘stopping the Remain alliance’, with the creative tailored towards whoever is the incumbent MP in a specific seat.

PRWeek analysed seven marginal seats to see how effective Facebook is at targeting voters and whether it had the reach to influence local elections.

A key litmus test for the Conservatives ‘Brexit election’ strategy is the Labour seat of Workington – a predominantly white, working-class electorate with an older population. In this electorate, 60 per cent voted to leave the EU.

Labour’s Sue Hayman won the seat by 3,925 votes in the 2017 election. Facebook claims it can reach more millennials on Facebook and Instagram than official population data, but its reach substantially drops for people aged 50 and older, according to its Ads Manager tool (see infographic below).

Facebook claims this would allow the Conservatives to reach a pool of 6,300 potential voters, with a daily cost of only £6 to reach between 1,000 and 2,900 each day. 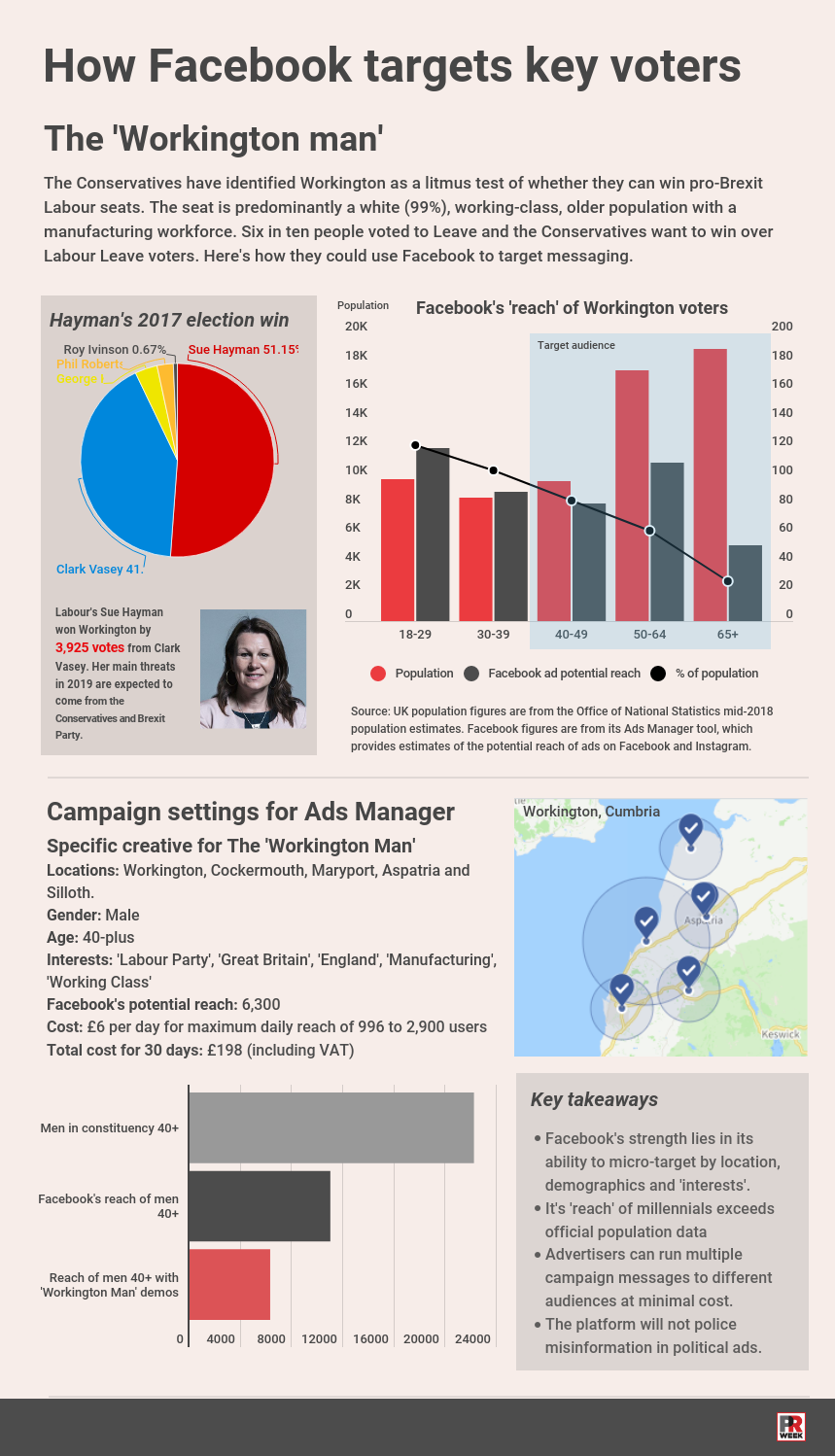 PRWeek shared its findings with senior public affairs professionals to find out how big a role social media advertising and messaging will play in this year’s general election.

Pagefield CEO Oliver Foster believes this election will "largely be fought out on social media", where candidates have total control over their message.

"The main benefit of social media for political campaigns is being able to market your message to a very specific audience," he said. "While politicians broadly understand who reads the Daily Express or who tunes into The Andrew Marr Show, thanks to targeted social advertising they’re able to know precisely who they’re talking to – down to age, location, gender, job title and much more.

"With so many seats predicted to come down to the slimmest of margins, being able to leverage Facebook’s clever algorithms to reach an extra few dozen people could prove decisive come 12 December."

Hill+Knowlton’s head of political and public affairs Scott Dodsworth believes social media platforms and online fundraising now form a key part of UK political campaigning. He says the power of micro-targeting combined with behavioural science has "a tangible impact on mobilising and persuading voters", particularly in seats where there is a close race.

"Facebook advertising is now standard practice and running a basic digital campaign forms part of the online training programme for activists and organisers," she said.

John McTernan, a senior adviser at BCW Global and a former adviser to Tony Blair, believes the election will effectively be 650 mini-elections – with messaging that is hyper-targeted, it will be hyper-local.

"In this election, different regions will vary widely because of the new identities created by the referendum – the Leave-leaning North will have a different campaign from Remain-favouring London and the South East," he says.

McTernan believes that social media is effective at attracting new voters to the polls, but is less effective at influencing their voting decision.

He said it’s important that social media messaging is part of a broader advertising platform and that when creative is tailored to a specific electorate or audience, it does not veer too far away from the major messaging platform.

Joe Toal, a senior account manager at The PHA Group, believes the use of Facebook and Twitter could have an impact right up until the eve of the vote.

"This year, the battle on social media will likely be a lot more sophisticated, taking the form of grassroots campaigns led by local party activists who will try and influence votes on a local level using organic means, as well as video becoming the go-to medium to promoting policy and smearing the opposition," he said, adding that he believes voters are more wary of fake news.

He added: "With Twitter imposing a ban on political ad spending during the build-up to December’s election, expect the battleground to shift to Facebook, a platform that is notorious for letting political parties run a bit more freely when it comes to messaging and audience targeting." 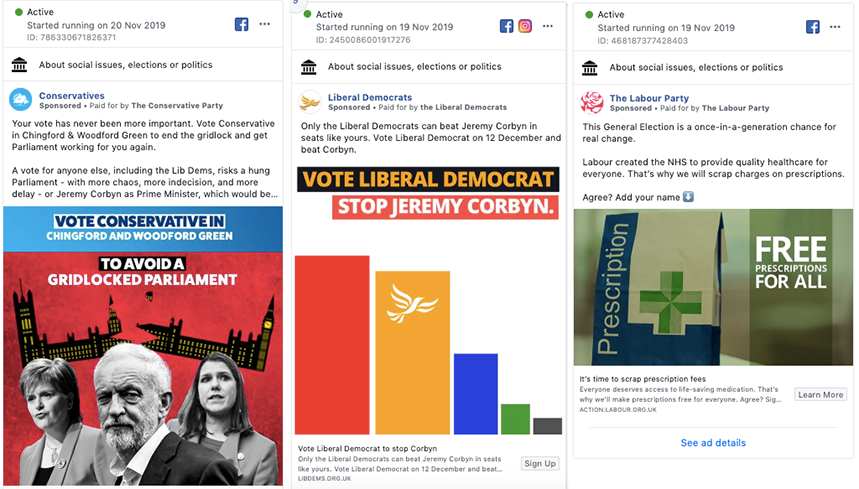 PRWeek's analysis shows that Facebook reaches a much larger audience of millennials than older voters.

In theory, this should benefit parties with a younger voter base, such as Labour and the Greens. However, the reality is that because of targeting, mass reach on these platforms is less relevant.

"Incumbents and established candidates have a huge advantage over those recently selected," Wallace explained. "In a short campaign building a profile with reach into the local community can be as much of a challenge online as it is offline."

"Candidates with a strong digital and social footprint now have the ability to counter and challenge national narratives, adding to the unpredictability of the campaign."

Foster believes the winner on social media will be the party that is able to mobilise its digital operation the quickest, and use this reactiveness to reach swing voters in marginal seats. "Creatively hijacking and reacting to stories in real time will allow operatives to steer that day’s news agenda," he said.

Foster uses a curious example to illustrate this point. The Conservatives’ edited video of Piers Morgan’s interview with Keir Starmer was roundly condemned in the media, including by Morgan himself.

"While many have chastised the Tories for their editing of the clip, given the subsequent reach it’s achieved and the prolonged discussion over whether Labour’s Brexit position is ambiguous, Conservative Campaign HQ will consider it a job well done," Foster said.

But social media can work both ways for political parties, allowing rivals to spread gaffes like wildfire, such as Kay Burley interviewing an empty chair in place of James Cleverley.

As Foster notes, there have been many examples of broadcast journalists "successfully seeking out a viral moment to embarrass politicians of all stripes" and the clips of these ‘gaffes’ used by rivals as campaign literature on social to mobilise their own bases.

"We’ve already seen that neither Corbyn nor Johnson are afraid to shirk traditional media channels such as BBC Radio 4’s Today programme – and who can blame them?," he added.

Wallace said another trend is that social media allows individuals to have a much greater impact on election campaigns with hashtags like #torystory #videosbythemany and the rise of prominent political influencers, such as Femi.

There are also obscure groups using these platforms to run political ads, a political type of astroturfing.

Social media, and Facebook in particular, will have a major role to play in the UK general election and the first casualties will be truth and, some might argue, the very foundations that underpin democracy.

Who's behind the obscure groups funding election attack campaigns on Facebook?