The sheer scale of these Facebook ads from seemingly single issue, or sector/industry groups adds a new dimension to the online battle for hearts and minds.

The social media giant gives users limited information about why they can see each ad via its ‘Why Am I Seeing This Ad’ pop-up.

However, more details are available via Facebook's Ad Library, which the company launched in the UK last year to make campaigning on its platform more "transparent".

The following was all spent over the last 30 days.

Working4UK (pictured) has spent £9,993 on 21 ads. They were paid for by Suraj Sharma, a Conservative councillor for Bromley. It positions itself as a voice for business with an anti-Corbyn message.

The Fair Tax Campaign was created on October 13 this year. So far it has spent £1,551 on 30 adverts, most of which attack Labour’s tax plans. The ads were paid for by Alexander Crowley - a former Boris Johnson aide.

Advance Together describes itself as a political party. The page depicts Boris Johnson as a stooge of Russian president Vladimir Putin, and how the US trade deal will affect the NHS.

The group has spent £2,328 on more than 200 adverts. The page is run by former Liberal Democrat candidate Annabel Mullin. 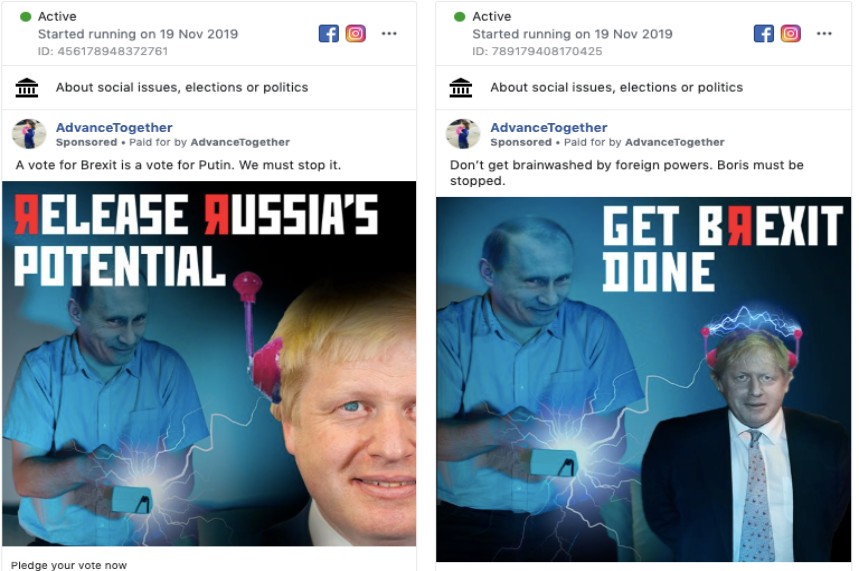 Parents’ Choice is being paid for by Richard Patrick Tracey, a former Conservative minister for sport who served under Margaret Thatcher and has said he was running the "defence ads" as an individual, not as part of the Convervative Party.

The ads attack Jeremy Corbyn and the Labour Party for their policies regarding private schools and target people "interested in education, Boris Johnson and more". The group was only founded on 11 October, but has spent £3,710 on 11 ads. 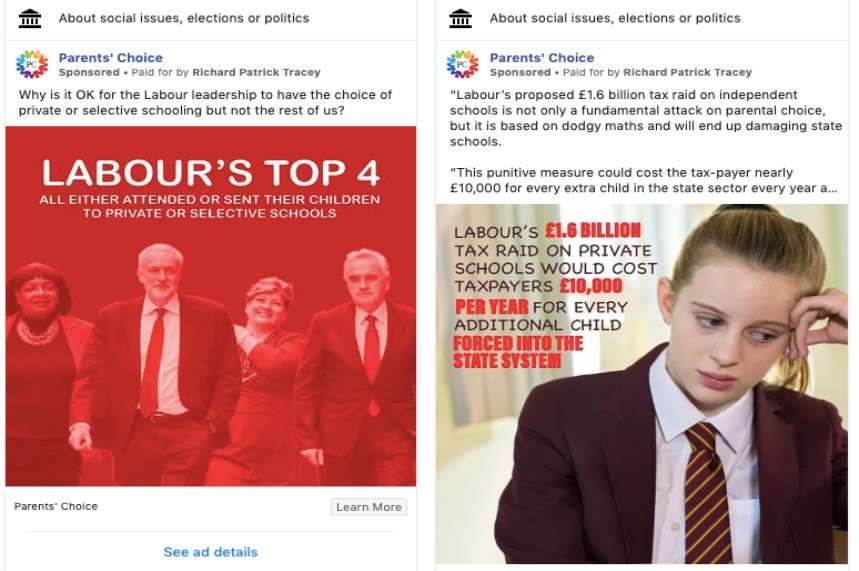 A Ms Jennifer Rebecca Powers is spending money on the page Right to Rent, Right to Buy, Right to Own. Created in September, it has spent £2,898 on 24 ads focusing on why it thinks Labour policies will destabilise the housing market.

The pop-up revealed Right to Rent had been trying to reach "people who Facebook thinks are interested in property", matching its post's suggestion Labour was determined to tax private landlords.

While there is no obscurity about pro-Labour campaign group Momentum's political allegiance, the group has spent more than £20,000 in the last month alone, targeting 18 to 35-year-olds with ads about the living wage and voter registration.

Daily Express journalist James Bickerton founded the Campaign against Corbynism in the summer after suggesting Labour "had been taken over by people with an at best questionable attachment to core liberal-democratic values".

It’s posts are directed at people over 35 "who are interested in the Conservative Party". It has spent £6,368 on 19 ads.

Campaign Together has spent £2,742 on 13 ads trying to encourage voters to campaign in marginal seats to unseat the Conservative party. The ads are being paid for by one of the group’s co-founders Sam Coates, who is also the campaigns and digital officer for a group called Unlock Democracy.

Best for Britain was set up in 2017 to stop Brexit. Over the last 30 days the page has created 180 ads, and spent £39,446 in the last week alone – out-spending the Conservatives and making it one of the largest spending special interest groups. The ads were paid for by the group’s COO Rudi Shenk. 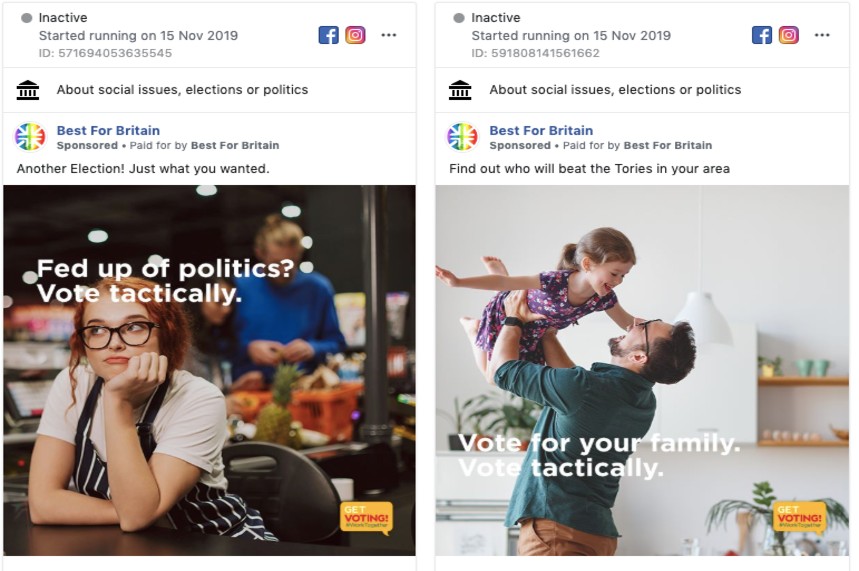 When the group launched its GetVoting tactical voting website, it received criticism for recommending voting Lib Dem in constituencies that many would assume to be on a knife-edge between Labour and the Conservatives.

Since then it has been revealed that the group’s CEO Naomi Smith stood as a Lib Dem in Westminster in 2010, while director Clive Cowdery is a Lib Dem donor. Cowdery made a donation of £15,250 to Lib Dem leader Jo Swinson in September, and gave £1,500 to Swinson's leadership campaign in May, plus £1,117.28 on a drinks reception for Swinson the same month.

The UK Government is the biggest spender, followed by Labour, Lib Dems, Conservatives and the Brexit Party. All of which have spent tens of thousands of pounds on ads that unsurprisingly run along party lines.

The Government had spent over a million pounds over the last year, with ads mostly focusing on Brexit. However, since the general election was called, it has somewhat ironically been providing users with advice on how to spot disinformation. 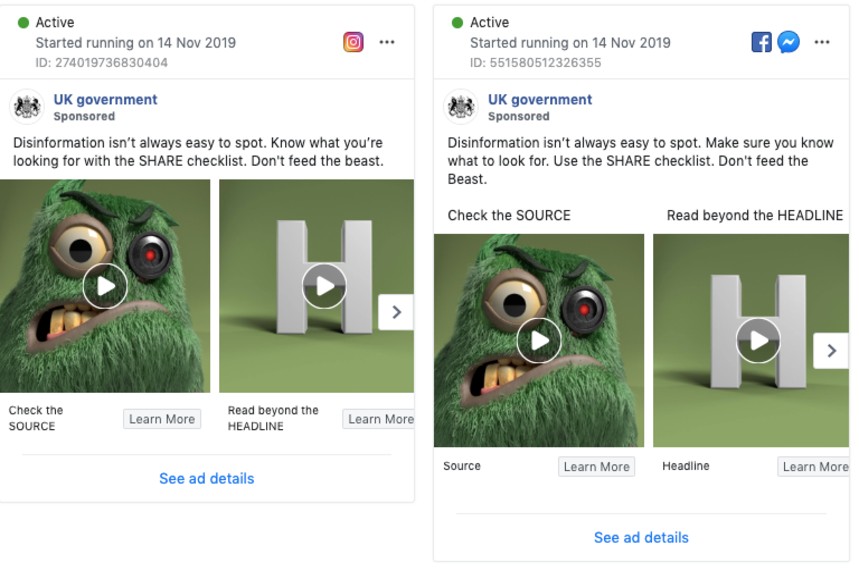 Candidates and parties have strict rules that include having to record what they spend during the election campaign: Parties must report their spending return, and candidates report to a returning officer.

However, non-party campaigners only have to register with the Electoral Commission if they plan to spend over £20,000 in England and £10,000 in Scotland, Wales or Northern Ireland.

This is just a snapshot. There are 142 pages in Facebook’s ad library, with 20 results on each page. The potential for voters being misled is huge.

The Conservative Campaign Headquarters (CCHQ) has already recieving a warning for misleading voters after rebranding its Twitter profile to resemble an independent fact-checking organisation during the first general election leaders debate.

This was a move that prompted the PRCA to remind PR professionals of their duty to fight disinformation, not purvey it:

"PR professionals must not disseminate false or misleading information. Doing so damages trust in our industry and in this case – the political process. We urge communications professionals to be mindful of their ethical responsibilities, particularly during a period of national importance."