The seventh annual social media report by PR firm Battenhall revealed a list of the biggest brands on Instagram, what makes them tick, how they publish, engage and connect - and how their profiles have grown.

In 2018, Stories had just begun to overtake news feed for the biggest brands; this year, the chasm between the two is widening. There were 10,954 posted over the last year to October, 8,820 feed posts, 400 IGTV videos and only three live broadcasts.

Like most social media platforms, Instagram has pledged to tackle the number of fake accounts on the platform but the average percentage of fake or suspicious followers across the 100 is 17.6 percent, up 0.7 percent from last year.

Brands varied hugely in the amount they published, with sports-focused accounts leading the way. @nfl came top with 1,410 posts, but fashion brands such as @fashionnova posted on average 39 feed and Stories posts a day, and @asos posted an average of 19 times a day. 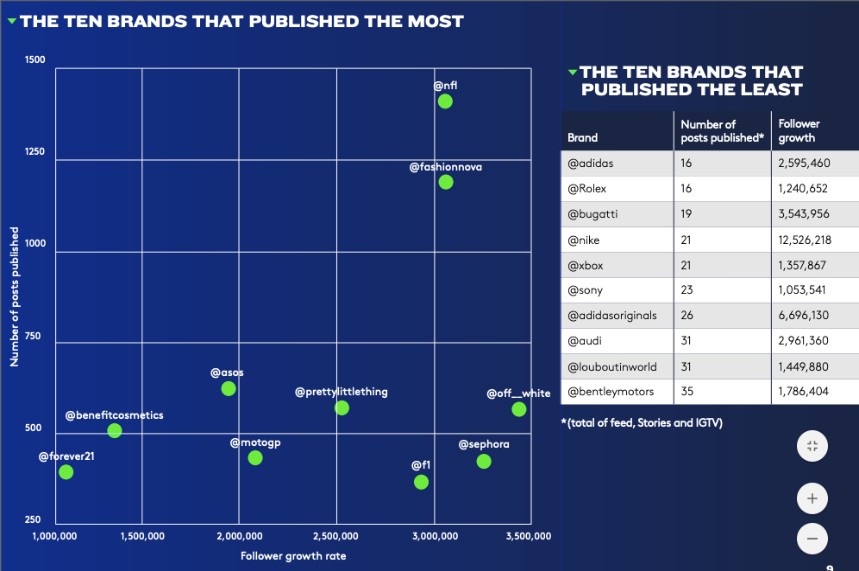 The number of Stories published varied from @nfl’s 650 a month to @sony’s 4. @nfl posted the most, with an average of 22 a day. This was followed by fashion range @prettylittlething, with an average of 14 a day. The data suggests that luxury brands are keeping their messaging rare and exclusive.

Fashion and sports posted the most, with @fashionnova averaging 31 posts a day (that’s one to two posts every hour) and @nfl posting 25 times a day on average. The least-active accounts consisted of sport-fashion brands and luxury automotive, with @adidas and @nike posting only six times within a month, going for quality and exclusivity over quantity. 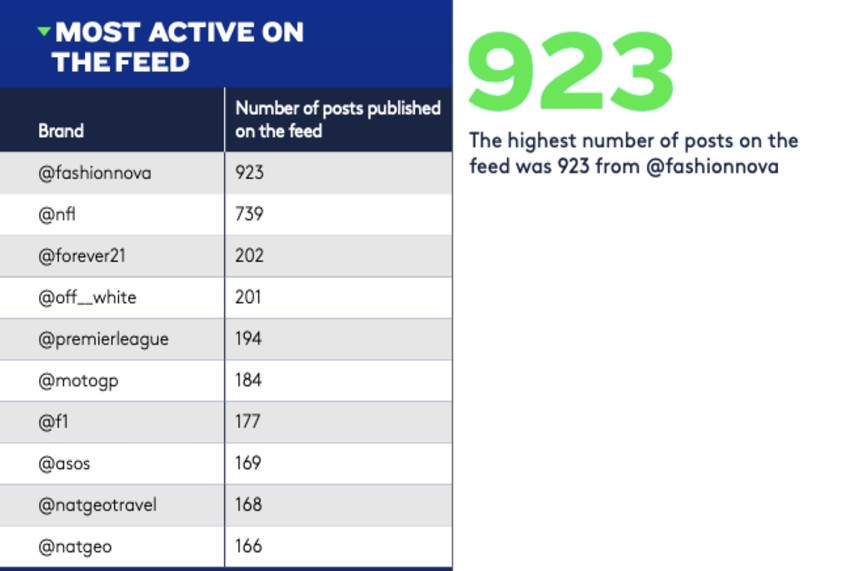 The research found that the larger the following the lower the engagement rate a brand had. An average 0.35 per cent, down from 0.8 percent in 2018. Just over one-fifth (22 per cent) of brands achieved an engagement rate above one percent.

In addition, entertainment and high-end luxury brands such as @bugatti dominated the most engaged brands. The least-engaged brands included some luxury companies, and large fashion retailers that posted very frequently and therefore brought their engagement rates down. 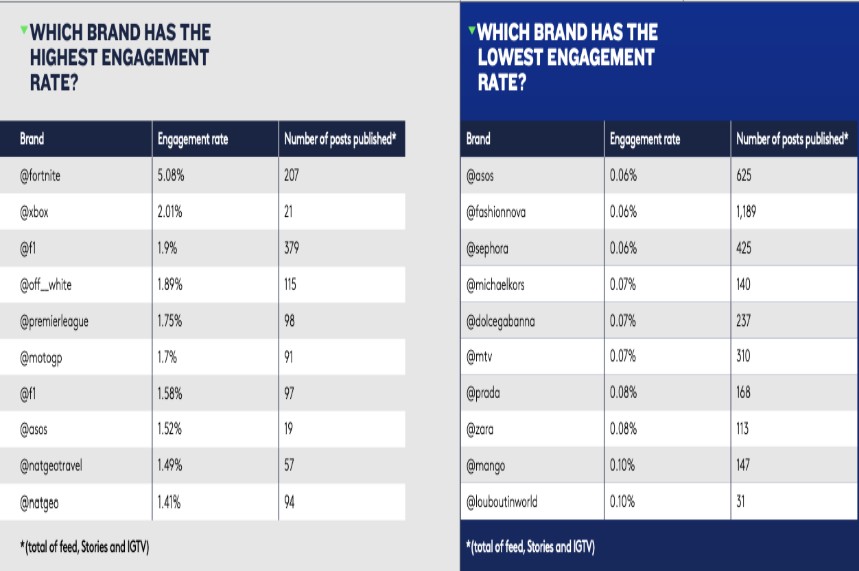 The comment to like ratio was measured by the number of comments per 100 likes. Across the platform the average ratio was just 0.35.

@benefitcomsmetics came out on top where competition posts played a major role. This was followed by gaming brand @easportsfifa - FIFA has a huge fan base that naturally causes a lot of discussion.

Luxury automotive brands have the least engagement as the audience tends to see these channels as more aspirational, rather than as a space where they can connect with a community. 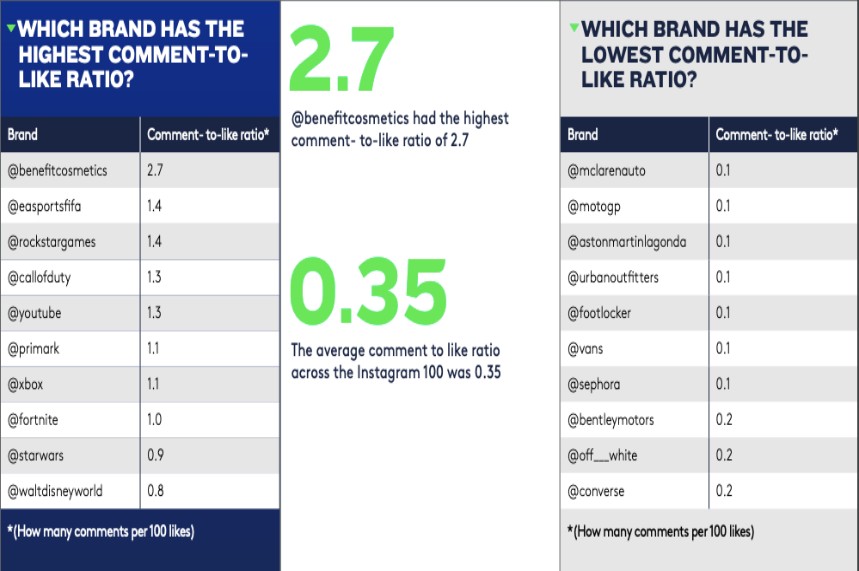 On average, each brand grew by four million followers over the last 12 months. Topical brands grew quicker, particlarly in the beauty and tech sector, while fake accounts continued to be a problem. Those were typically accounts in beauty and tech.

Fake accounts are still a focus for many platforms to improve, and while the platform has taken steps to remove them over the last year, the average percentage of fake or suspicious followers across the top 100 brands was 17.6 per cent, up 0.7 per cent from last year.

Although they had a combined total increase in followers of over 400 million, fashion and beauty brands continued to make up the accounts with the most-suspicious followers, while entertainment accounts had the least. 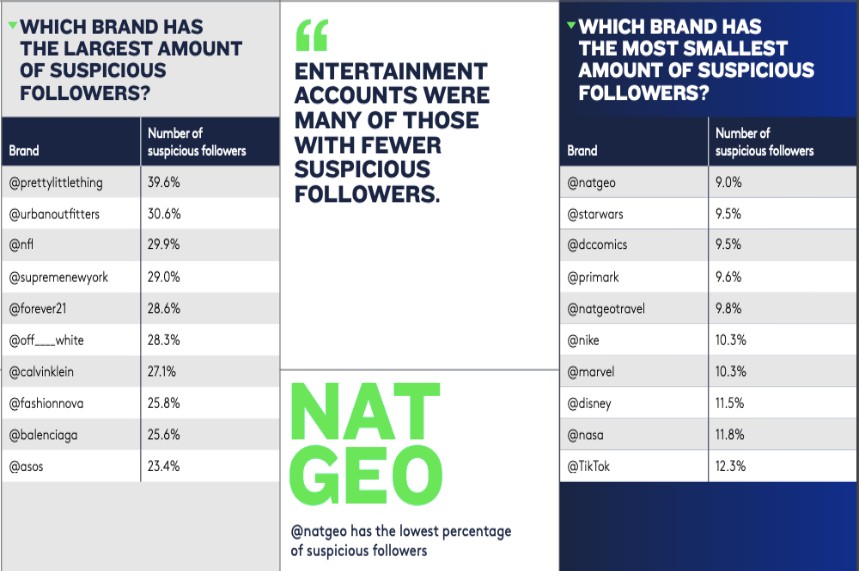 Overall, gaming brands such as @xbox and @fortnite had the highest audience quality scores, reinforcing the benefit of an engaged audience. Fashion and beauty brands featured most amongst the lowest-quality scores, with the exception of @mtv at 16 per cent. 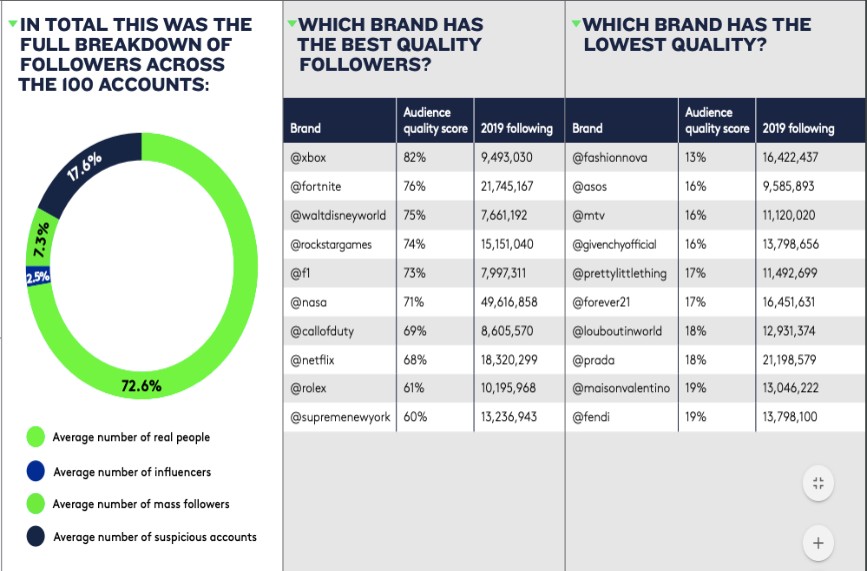 Founder and CEO at Battenhall, Drew Benvie, described 2019 as ‘the year of the creator’ and explained how the platform's increased popularity had seen a greater focus on social responsibility in 2019.

"It introduced stricter guidelines to remove content that could cause harm, and brought in a ban on all images that promote self-harm, a move universally supported by users, that has resulted in double the amount of content related to selfharm removed from its platform."

Benvie also discussed how the platform was trying to evolve by trialling the removal of publicly visible Likes in seven countries to promote a less pressured environment, and has blanket-removed the much-maligned ‘Following’ tab that was used more as a stalking tool.

He added: "As the social-media ecosystem evolves, so too do our expectations of Instagram and other social networks. In this report we have identifying the most popular functions, along with those that are dwindling, and where you might look to invest your efforts for the year ahead in order to make your community as vibrant, engaged and creative as it can be."