The hour-long BBC Newsnight programme featured presenter Emily Maitlis forensically grilling the Duke of York about his relationship with Epstein, why he chose to continue that friendship after the disgraced financier served time for sex offences and allegations he had sex with teenager Virginia Giuffre (then known as Virginia Roberts) – a claim he has always dened.

Prince Andrew’s responses have ranged from ‘remorseless’ towards the victims of alleged sex offences to ‘bizarre’, such as suggesting he didn’t meet up with Giuffre because he was dining at Pizza Express and that he couldn’t sweat due to a condition he had picked up in the Falklands War.

Jason Stein, a former adviser to Amber Rudd who Prince Andrew had hired in September to help him clean up his post-Epstein image, advised against doing the interview and quit after his advice was ignored, according a report in the Times.

Communications experts speaking to PRWeek all agree the ‘car crash’ of an interview was poorly advised and executed.

Many have criticised the Duke's lack of empathy for the victims, ignoring the counsel of his PR adviser and being out of his depth to face a skilled interviewer in Maitlis (pictured below with Prince Andrew). 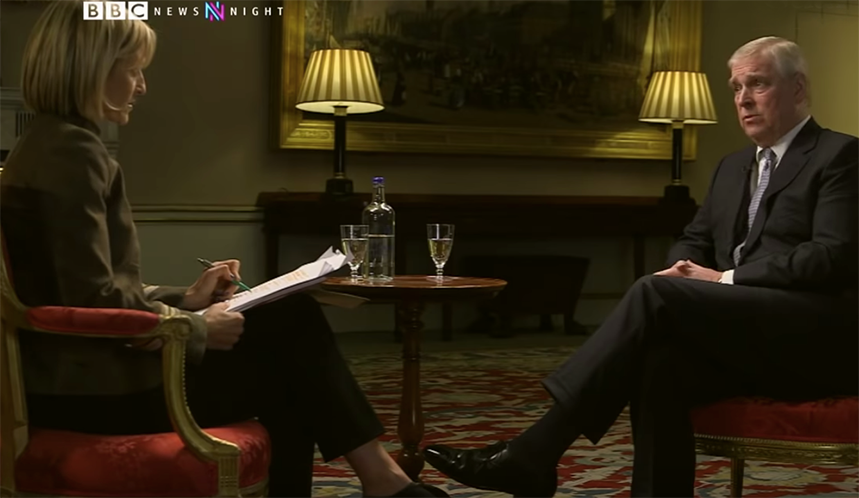 There's an unspoken set of contemporary rules behind the Royals, TV and PR – and Prince Andrew broke them all. As a masterclass in PR disaster, the interview will not be knocked off the top rank for some time. The Royal Family and TV has generally been a toxic marriage and given the long-term negativity around Prince Andrew as a starting point, his hubris was always going to raise a few eyebrows. Designed as a PR exercise to dampen the flames, it did the opposite, igniting global negative headlines and a million social memes. Prince Andrew should have been counselled and he most likely was. If you want to garner positive media you have to tread with caution, put in the hours and build some good relationships before you step into the spotlight. Never before has a plan been so liable to exposure nor so important, and if you only have inefficient sweat glands, selective memory and pizza to back you up, you need to be prepared to challenged; listen to good and impartial advice. It will now be even harder for him to rebuild any kind of voice or brand that we can listen to or believe.

It seems that the Duke of York thought this interview would help draw a line under the raft of negative stories generated from his relationship with Epstein. But on Friday, no-one was talking about the Duke, and by Sunday the whole country was. It was a masterclass in how to create a story, not draw a line under one. Abraham Lincoln once famously said: "He who represents himself has a fool for a client." It’s as true today as it was then; if you are at the centre of the story, you will not think objectively, and you should not trust your own judgment. Instead, trust your experienced professional staff; they will give you independent advice uncluttered by emotion and ego. Damaged reputations take time to recover and The Duke will not be able to bounce back from this one. My advice: lay low, and silently put all your energy into some charity work. Earn some trust back, the reputation might follow.

Prince Andrew’s phrase, "My tendency to be too honourable..." will be used in media training courses explaining how not to justify yourself for years to come. @maitlis #Newsnight.

I’m not sure what is going on over at Buckingham Palace but 2019 has been a PR disaster for the Royals. The supposed feud between William and Harry, the ongoing vilification of Meghan and now this. It would appear they are no longer interested in listening to advisers and are trying to manage their PR themselves – a very strange move, but perhaps one that’s been forced by a growing mistrust and the multiple "leaks" coming out of the Palaces over the past few years. This interview will define Prince Andrew’s legacy, and there is little that can be salvaged from such self sabotage. Not only has it affected his own reputation but severely adds to the notion of the Royals being out of touch. However ‘laughable’ and cringeworthy the interview, it is important to remember that it is the women, and Prince Andrew’s multiple charities, that are the real victims.

If that interview was given by someone in any organisation bar the royal family, they would have been fired by breakfast on Sunday morning. It wasn’t just a car crash, it was a car crash that will now become a set text for PR students on how not to conduct yourself in a media interview. First, he completely failed to understand the core issues – that there are real victims here and he isn’t one of them. The vast majority of his interview should have been spent showing contrition, sympathy and respect for Jeffrey’s Epstein’s victims. The Duke came across as not very bright, which can be forgiven, but also unapologetic and lacking in remorse, which cannot. Second, he was clearly out of his depth with the media outlet he chose to tell his story to. It was a total intellectual mismatch and he just wasn’t clever enough to withstand Emily Maitlis’ questions. Third, he looked under-rehearsed and underprepared –  his alibis were incomplete and his language was all over the place. "Unbecoming behaviour" is not an appropriate description of sex crimes. He either got the wrong advice, or ignored the right advice. Either way, this was a masterclass in how not to do it. 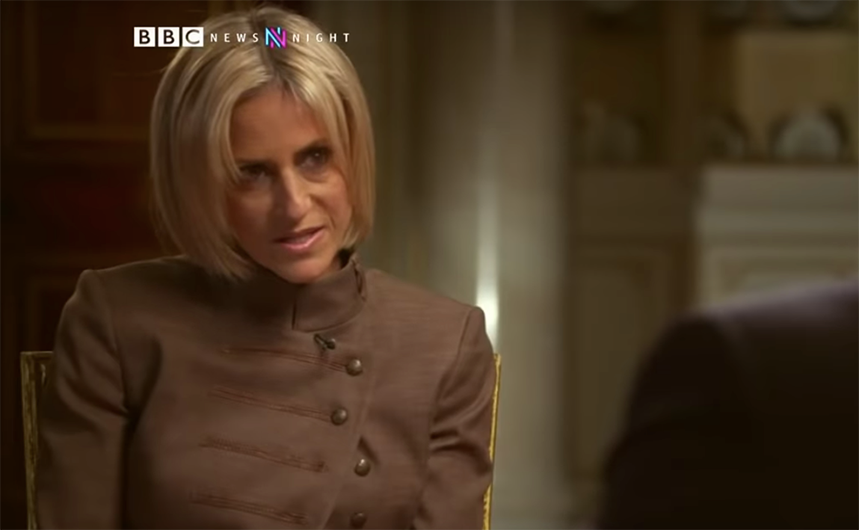 Newsnight presenter Emily Maitlis has been widely praised for how she handled the interview (Source: BBC)

There are very few moments in my life when I am pleased to see PR crash and burn, but this was one of them. Personal feelings aside, I'm still quite shocked that nobody was able to talk him out of this, given the line of questioning that would be directed towards him and the fact that this was around shifting public opinion. High risk and likely to fail. Under most normal circumstances I would have been cringeing on behalf of the sorry PR folk who had to clean up this mess, having been there a few times myself. However, given the outrage I felt at hearing a public figure bumble through with excuse after excuse (a theme which seems to be dominating the news agenda at the moment), focusing on the impact to his own mental health rather than the victims in the Epstein case, with no word of empathy or apology, this was one time I was glad one my industry peers was ignored.

I fear the client in this extraordinary scenario is uniquely challenging and very tough to counsel. Listening to advisors requires humility and that wasn’t evident Prince Andrew’s interview. But worst of all was the complete absence of empathy for any of the victims. In fact, 1/2

So many things wrong with this I struggle with where to begin. Pig-headedness, missed points, unpleasant delivery and sheer oddness. Even if anyone attempted to media train him he's clearly ignored advice, showing how detached from reality he must be. You can see why Andrew's former PR resigned over the decision for him to take the interview. It was always going to be bad. Reputationally, he's crashed the plane into the mountain."

I think what sweaty-gate demonstrates is the danger of making any categorical statement without being 100 per cent sure that there is no quickly searchable imagery to contradict it, and this is increasingly true with over 3.2 billion images being shared every day and the era of fake news.

This was the interview that Buckingham Palace thought would turn everything around for Prince Andrew - the first senior Royal since Princess Diana to subject themselves to hostile questioning from one of the BBC’s most forensic interviewers. In the end he said he had learned a lot from a sex trafficker. Not the result they wanted. Buckingham Palace had three aims from this encounter – express regret at the relationship with Jeffrey Epstein, empathy with his victims and to remind viewers the Prince is a worthy and hard-working member of the "team". However, the stubborn and rather odd code of honour Prince Andrew adopted about his former friend, which came out under close questioning, meant the first two aims failed and the third was shoehorned into the final clips. Emily Maitlis’ technique was a masterclass in how to conduct a bombshell interview – adopt a neutral but sceptical tone, tease out a clip, move on, cover the ground and let the interviewee dig their own hole.

The saddest thing about that interview was his lack of awareness and sensitivity for victims of sexual abuse. How he wasn’t prepped better is beyond me. The whole interview was completely tone deaf. Especially after the backlash Harry and MM got recently. I can imagine Will and Kate were just mortified.

There's a reason he's kept out of the media. He proved it again. No empathy, no concern. Apart from for himself and the Royals' reputation. His arrogant reputation precedes him, whether in the Navy (a relative used to maintain his helicopter) or elsewhere. 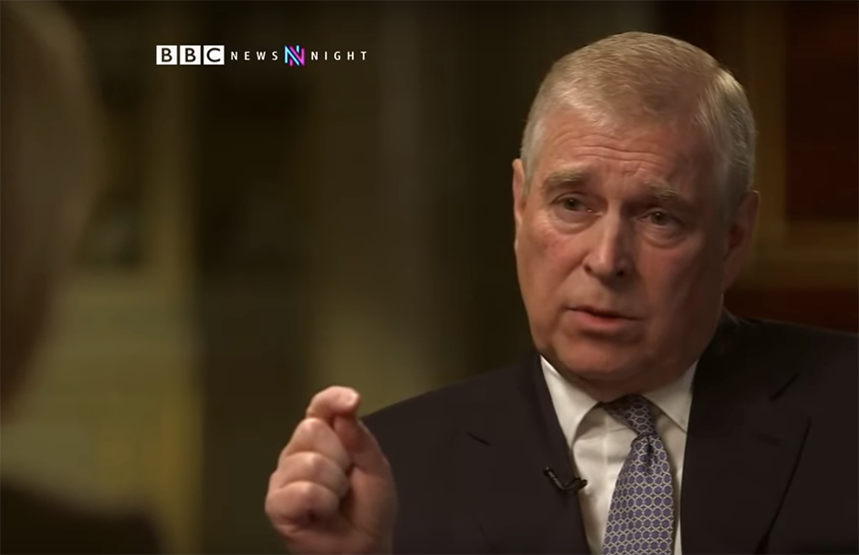 This is not a PR crisis, as it’s been described by many of today’s papers. This is a crisis, born from a refusal to heed professional PR advice. The case for hiring strategic PR professionals - and adhering to their advice - could not be clearer.

When you wake up and the first thing you think of is: I am biologically incapable of sweating because I ODd on adrenaline in the Falklands

This thread on #PrinceAndrew is what every PR person should’ve tweeted, but was afraid to as they’d like the chance to work on/ with Clarence House one day: @prweekuknews https://t.co/HGagbsP2a4

Me watching this car crash interview cursing the PR who thought this was a good idea and looking at the influx of reviews on Pizza Express Woking. Poor @PizzaExpress social team - my deepest thoughts are with you, at this difficult time https://t.co/4UrRd6GJL6 pic.twitter.com/cVG3sZ17X6

I knew @PizzaExpress would have some gentle fun with this. They haven't disappointed ??#PrinceAndrew #Newsnight https://t.co/barqwoyjw7

Assuming his PR team know the full story, there is also potentially an ethical issue here. When is it ethically OK to arrange a media interview for a person who would usually be interviewed by the police? I’m not sure I would feel I would be upholding my professional standards.

We can all denounce a decison taken when we have hindsight showing it was the wrong choice to make. But the first rule of crisis comms is NOT to avoid the issue- it's to address it. And he did. But losing his PR counsel two weeks earlier led to the inevitable (disastrous) outcome

Thing that Prince Andrew was most disgusted about tonight: that he’d ever been to the Woking Pizza Hut