Amidst all the rampant Christmas consumerism, it’s heart-warming to see a campaign that tackles a contributor to global warming: single-use plastic.

The very worthy winners of last year’s Creative Shootout – Wire – came up with the brilliantly simple idea (in four hours, no less) to make plastic personal by testing people to find out if they are ‘plastic positive’. Based on sobering scientific research showing that there are now traces of plastic in people’s bodies, the campaign has kicked off by testing high profile environmental campaigners including Lucy Siegle and Liz Bonnin.

I’m excited but terrified to see where it goes next. 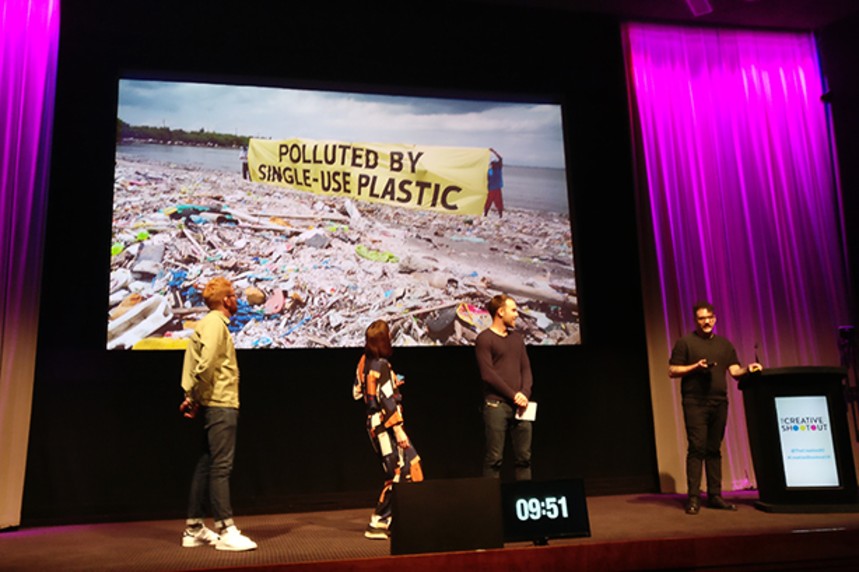 I don’t believe that creativity is in our blood but it certainly runs through 2015’s Missing Type and the recent #bloodwithoutbias campaigns. In its first campaign since being bought by LadBible, Unilad has teamed up with FreedomToDonate and Elvis to campaign against ‘blood bigotry’ - the current law that prohibits gay and bisexual men from donating blood unless they abstain from sex for three months.

The multi-channel campaign has the vital organs to make it a very successful campaign: timeliness (there’s a dip in donations in December and January), a genuine world’s first (an illegal blood bank, which launches on 23 November), powerful visual identity, celebrity with an authentic link to the cause (Keegan Hirst), clear call to action (sign the petition or donate blood at the bank), single-minded purpose (change the law) and a media platform with a monthly reach of 430m users as partner.

This brave campaign shines a light on an outdated law that lumps individuals together as one homogenous group defined by their sexuality, whilst reminding us that donating blood is a gift we should all be giving this Christmas.

HP – maker of screens and printers - has signed up Academy Award-winning director Michel Gondry to create a video that calls families to "put the phone down" this Christmas.

Gondry creates a whimsical wonderland in which a young girl watches a terrifyingly relatable reimagining of "12 Days of Christmas" for our screen obsessed world; 12 teens-a-texting, social feeds-a-feeding and even Father Christmas is too busy a-swiping to get the stockings a-filled.

But as her battery dwindles to five per cent the world transforms into an all-together more wholesome version of Christmas where the 250 hours spent on screens during the festive period (according to HP research) is relegated to Christmas past. Binge-watching is replaced with 12 boys-a-baking, (cue product plug alert), five printed things and a smug looking screen-free family who are presumably dusting off their Christmas jumpers in the hope they won’t make it into any social media feeds.

But what to do with these extra 250 hours HP has so kindly gifted to us over the Christmas period? HP has teamed up with artists and influencers to develop more than 250 hours of printable activities from comic books to recipes (no screen, no Deliveroo remember) – so screen-related guilt is replaced with excessive paper consumption-related guilt.

Cynicism aside, Gondry’s magic and attention to detail makes the video worth sneaking in a quick watch before swapping your phone for a paper aeroplane.

Last year’s Elton John campaign might have been a gratuitous promo for Rocketman, but I admit it tickled my emotional ivories. This year, John Lewis has gone back to its ‘winning’ formula of mythical misunderstood animal + human child friend + 80s power ballad covered by contemporary artist = winning at Christmas.

Although this time it doesn’t. Far from setting the Christmas campaign world on fire - as its protagonist dragon Excitable Edgar does so flamboyantly in its Medieval-meets-Victorian home - the film itself a damp squib.

Why? Because the emotional levers feel forced and, as mum to a toddler, I can’t get Julian Donaldson’s Zog (the friendly dragon character from the series of picture books) out of my head.

Edgar might be green (John Lewis and Waitrose branding) instead of orange (that would be Sainsbury’s right) but he’s accident prone and has a young girl as his best friend.

It’s not the first time John Lewis has taken inspiration from children’s literary characters; in 2017 it was alleged that Moz the monster was very similar to Chris Riddell’s Mr Underbed monster (which happily boosted his book sales). Of course I’m not the first to notice this and John Lewis has responded to comments asserting that "Edgar is an original character".

Original maybe, but there’s only one clumsy dragon to me and that’s the one without its own Snapchat filter and Twitter account.

Tropes can only get you so far - is lack of original thinking hampering campaigns?