Over the Diwali weekend, social media blew up in Singapore as an executive director from asset management firm JP Morgan was caught on camera verbally abusing a security guard at his private condominium building.

The incident took place last Friday when the employee was asked to pay a SG$10 (US$7) parking fee for guests visiting his residential unit. In the video, the man was seen telling security officers that he had bought his condominium unit for S$1.5 million (US$1.5 million) before continuing to spit out profanities.

The video has riled Singaporeans up, and the issue has been taken up with worker unions all the way up to senior ministers in the government. 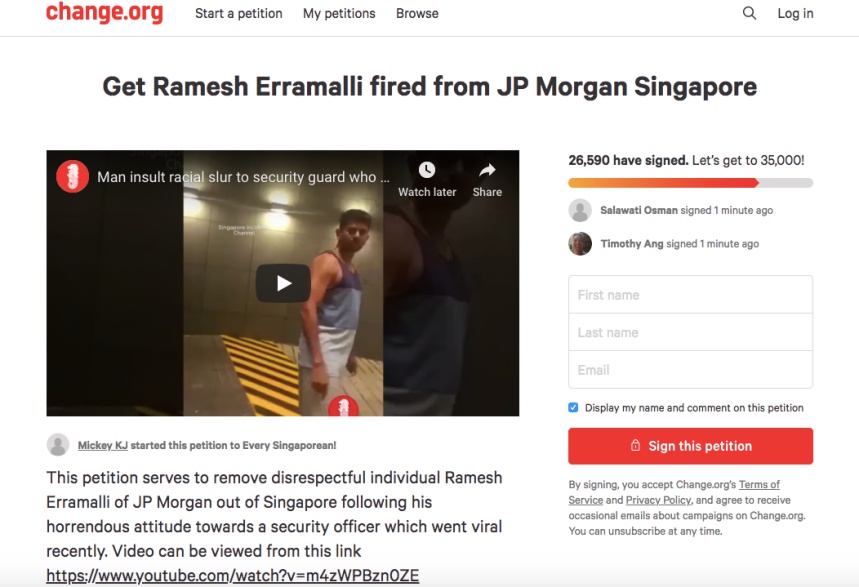 Since the video went viral, the man in question has allegedly filed a report on the ‘doxxing’ he has received. Details of the man’s condominium unit and mobile phone number were mentioned in the video, and since then, details about his alleged pay and education history have also been published online.

In the midst of all of this, senior country manager of JP Morgan Edmund Lee has issued an internal memo to staff reminding them to behave appropriately whether inside or outside the workplace. The memo – seen by local newspaper The Straits Times – doesn’t specify any person or incident but said that staff are "expected to demonstrate the highest standards, including respect and dignity for others".

"Our people, services and commitment to integrity have made JP Morgan one of the most respected financial institutions in the world. We all have a shared responsibility for preserving and building on this strong reputation," the e-mail read. 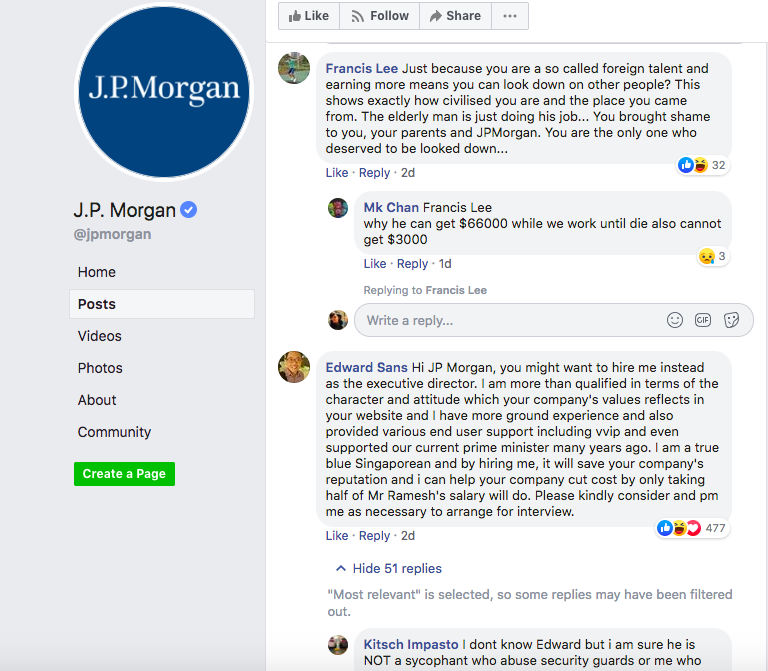 In the last couple of days, online petitions have circulated online pushing for the employer in question to be sacked from JP Morgan. One user said: "I hope [JP Morgan] will do the necessary to uphold its values and image. Not doing so is sending the wrong message to the public about what the core values of the company are."

Meanwhile, the company’s official Facebook page was filled with angry comments by Singaporean users. Not only is the incident sparking anger because of the man’s poor behaviour, it’s also sparking a larger conversation among Singaporeans about the influx of foreign talent into the country.

For instance, one user commented on a local website: "JP Morgan should review and tighten their recruitment process instead... I don't believe [his] job cannot be done by Singaporeans.. I can throw a stone and easily hit 10 other people with the same or better tech skills set and better attitude than [him]."

The man in the video – allegedly of Indian origin – is said to be Singaporean.