Our client, Hectare Agritech, wanted to raise the profile of its SellMyLivestock trading platform. We could’ve tried a safe campaign targeting key users. Instead, we decided to be a bit brave and a bit funny. That led us to develop a dating app, but for cows. We called it Tudder.

Our media campaign launched on Valentine’s Day and took off, generating a tonne of traffic and new subscribers to SellMyLivestock, while opening up new international markets.

When it comes to pairing cattle, there’s a whole lot of data available to farmers. The SellMyLivestock platform collects and uses this data to make informed matches – so in that way, it’s more informed than many dating apps.

This serious kernel formed the basis of a fun idea. A dating app for cows.

We knew that if we pitched it right, a funny and good-natured campaign would go down well with our target audience. We also got the sense that the media and the public were tired of Brexit-related news, and would welcome a humorous diversion!

Budget was limited, so a media campaign incorporating organic social was a good way to reach key publications and talk to the public about agritech issues, while creating brand awareness for Hectare and SellMyLivestock.

Ewe-harmony came a close second to Tudder. Perhaps next year!

Describe the campaign planning and process

Our goal was to encourage farmers to think more about technology, and our strategy was to get livestock love on the media agenda.

We created the Tudder app, with Tinder-like swipe left and right functionality. Then we supported the app launch with an ambitious media strategy that included tailored Valentine’s cards mailed to key journalists, as well as targeted, exclusive briefings with media contacts and a social media campaign.

The briefings were backed up with creative assets for use in coverage. Think light-hearted farm and livestock photography, app stills, and a funny "100% bull 0% bullshit" campaign video created on a shoestring.

The video clearly explained the Tudder concept behind the fun name, and contributed to the overall success of the social campaign. We began campaign planning and asset development in early January 2019, and the media campaign officially launched on Valentine’s Day. Client campaign analysis happened towards the end of February – though media interest continued throughout March and beyond. 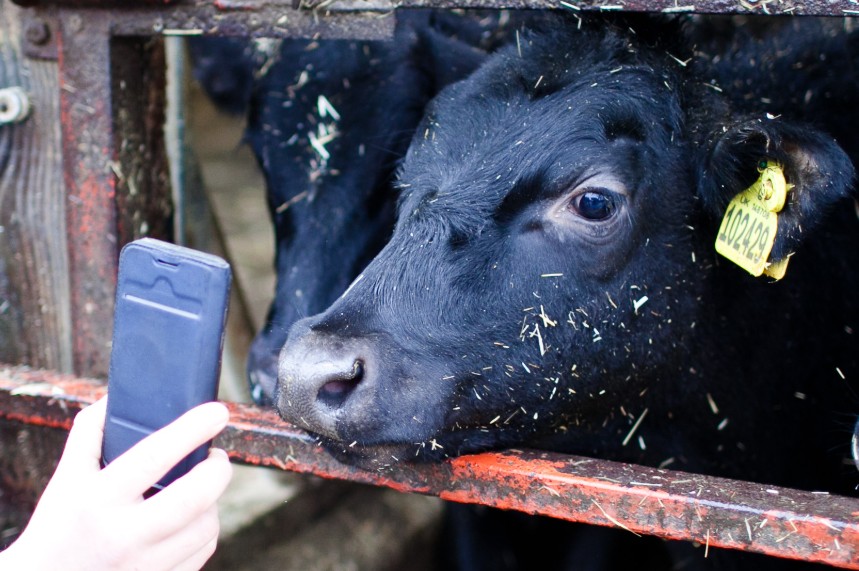 The campaign was fun, but there was a serious message behind it. We wanted to make sure that the audience could look past the laughs and understand how important technology can be for struggling farmers everywhere.

To get that across, we decided to put farmers themselves at the centre of the campaign and let them tell their stories. We put forward SellMyLivestock users who we knew would interview well, and carried out interviews on their actual farms. Tight spokesperson briefing and media training was essential to ensure Hectare bridged from fun headlines to serious underlying topics.

Our team used Sysomos to measure media engagement on social, and Meltwater for web and print. They then worked with our clients to report on harder metrics like app downloads, SellMyLivestock visitors, and new registrations to the platform.

The campaign achieved 1,037 global print media mentions, more than 30 global broadcast segments, and a print media reach of 1.3bn. As well as more than 18,000 downloads across Apple and Google app stores, Tudder ranked among the top 10 business apps during launch week. There was a 30 per cent uplift in SellMyLivestock traffic during the coverage, and a 58 per cent increase in new user registrations compared with the previous six-month average.

It led to international contacts being made with investors and potential partners in the UK, US, Brazil, Argentina, Australia, France, and New Zealand.

That humour can be used to tell a serious business story. B2B doesn’t need to be boring.