It was an eventful day for Australian rent-a-quote and England head coach Eddie Jones on Tuesday. His bombastic press conferences have become a fixture of his tenure, but two days out from the World Cup semi-final against New Zealand, where stakes couldn’t be higher, he treated the assembled media to a masterclass in distraction, diversion and expectation management.

This is by no means the first time Jones has used PR to try and take pressure away from his players by drawing attention onto him – but it is perhaps his finest work to date.

He entered the conference flanked by defence coach John Mitchell and fly-half Owen Farrell. While Farrell and Mitchell are hugely important members of the England set up, they are – to put it bluntly – as dull as dishwater. If you are a journalist hungry for a news line, it was only ever coming from one place. Exactly how Eddie likes it.

He opened by accusing someone of spying on England’s training preparations, claiming to see a person with an iPhone hanging out of a window of a local building.

Could be undercover New Zealand agents, could be over-zealous Japanese rugby fans. Could also be complete nonsense, who knows, but it was good enough for ‘Spygate’ drama to be splashed across the back pages. 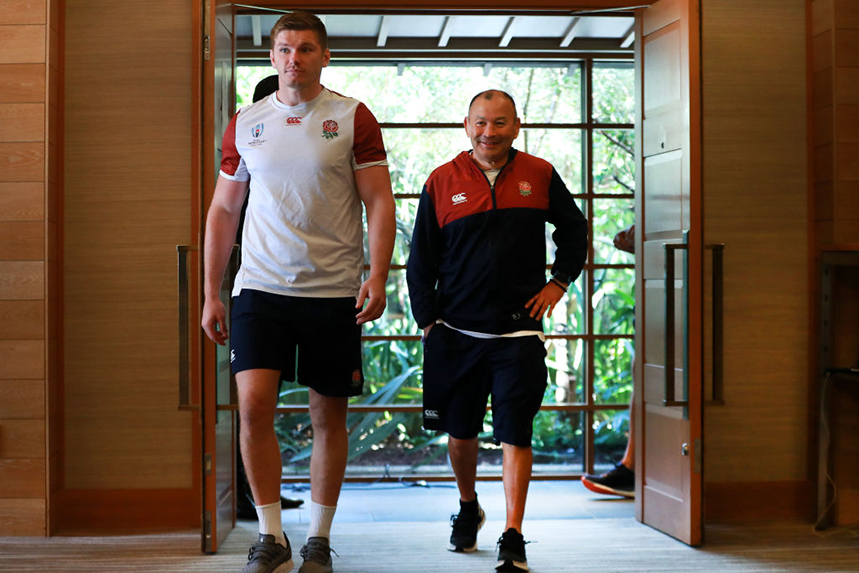 Next, Jones asked the press conference to raise their hand if they thought England could win. When bemused hacks simply stared back at him, he took it as confirmation that England were huge underdogs despite their impressive dispatching of Australia the week before. Coupled with a comment that the busiest man in New Zealand this week would be their "mental skills coach", the back pages were filled with articles questioning who was under more pressure, and in what ways New Zealand are fallible.

Perhaps the most telling section of the conference was this: "New Zealand talk about walking towards pressure – well, this week the pressure is going to be chasing them down the street," Jones quipped. "That's how we're approaching it. We've got nothing to lose, we can just go out there and play our game. If we're good enough, we'll win; if we're not good enough, we've done our best."

In this pre-match psychological war between Jones and the press, this was him framing the debate. His team are going to throw everything they have at it, but he has left himself a get out clause if it's needed. If you are doing your best there is no failure – so they say.

It is true to say that some members of the press have seen through this, but every column about Eddie Jones’s PR strategy (including this one) is a column not about England’s potential weak points or recent instances of mental frailty (second half vs Scotland anyone?).

Jones knows he is a divisive character, but he couldn’t care less. His job is to prepare his players the best he can, and in this case, I would chalk this up as a PR job well done. Even as a Scotland fan.

David Leslie is associate partner at Pagefield and host of The Thistle Scottish Rugby Podcast.