Women in Public Affairs (WiPA) commissioned Opinium to survey its members for the first time on a range of issues, from job interviews and working practices to pay and promotion prospects.

It uncovered a culture in which women felt uncomfortable asking about an organisation's maternity policies during interviews, unable to take up flexible working opportunities once hired, and unsupported in their career progression.

The survey spoke to more than 260 women; almost half of them worked for an agency while the remainder worked in-house.

Nearly 80 per cent of respondents were from London, with almost 10 per cent based in the South East, five per cent in Scotland and the remainder from across the regions.

More than three-quarters of those surveyed were aged 18-34, while the remainder were in the 35-54 age bracket.

Nearly half were cohabiting with a partner or in a long-term relationship, a third were single and the remainder were married. Nearly 15 per cent had children. 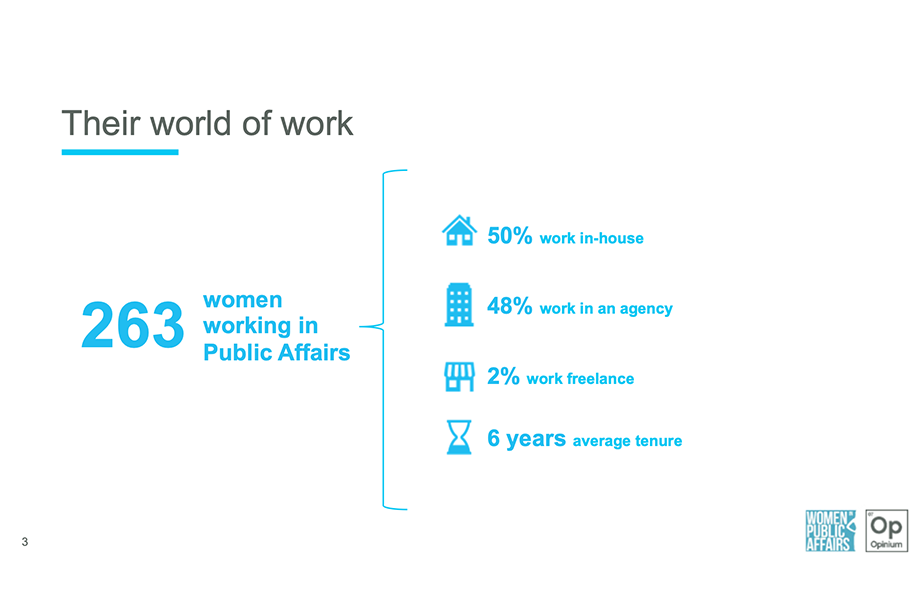 The survey paints a disturbing picture of the extent of discrimination and sexual harassment in the sector, as well as a failure of employers to address the issue.

In an uncomfortable echo of an industry-wide survey carried out earlier this year, 27 per cent of those surveyed by WiPA said they had experienced either verbal or physical sexual harassment during the course of their careers.

One respondent told the survey: "I experienced some sexual harassment as a young public affairs professional from my first boss. There's still a lot of alcohol consumed in public affairs and some senior people seem to use this as their chance to prey on more junior people. Most of my female friends who work in this industry have experienced it at some stage, if not several times."

Respondents were also asked to rate the sector as a whole on how well it protected people from sexual harassment, dealing with incidents and also supporting people who had been on the receiving end of it.

Worryingly, nearly a third of respondents rated the sector as either poor or very poor at responding to sexual harassment, while just four per cent said it was strong on the issue, dropping to two per cent among those who worked in-house. Nearly half of all respondents described the sector as 'average' at dealing with the issue. 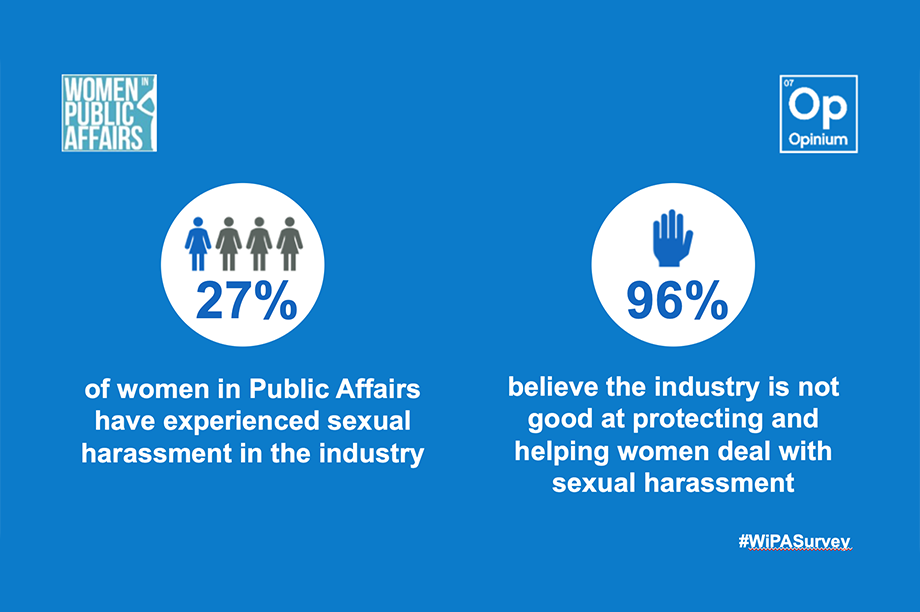 One respondent told the survey: "I think the biggest issue that needs to change is sexual harassment and not feeling comfortable or safe in certain environments that you find yourself in by working in public affairs as a woman, i.e. political networking events that are male-dominated, and agencies that retain male employees for their new business skills, even if they are known to be inappropriate towards women."

Almost half of all those surveyed said they faced discrimination of one kind or another while working in public affairs.

Nearly a third told the survey they had experienced discrimination based on their gender, while more than a quarter said there was age discrimination in their workplace, rising to nearly 30 per cent among those aged 18-34.

Many respondents pointed to the overt masculinity of the sector and the feeling that a boys' club or a 'laddish', macho culture existed in their organisation.

There is definitely a boys' club and I unfortunately have a vagina.

One said, flatly: "There is definitely a boys' club and I unfortunately have a vagina," while another said: "Things could be done to mitigate against the laddish culture in both the company and industry that ensure that men thrive in the workplace."

Another told the survey: "It's still a very 'macho' industry, which seems to require out-of-hours networking and ego."

There was also the feeling among those surveyed that the male-dominated sector created a damaging culture for women.

One said: "Old boy's culture definitely still exists with awaydays, with clients focused on traditionally male, archaic, pursuits like shooting. It does not feel very welcoming for most women."

Respondents were asked a range of questions about the hiring practices at the organisation they worked.

They were asked to pick from a range of workplace policies which would attract them to a role. 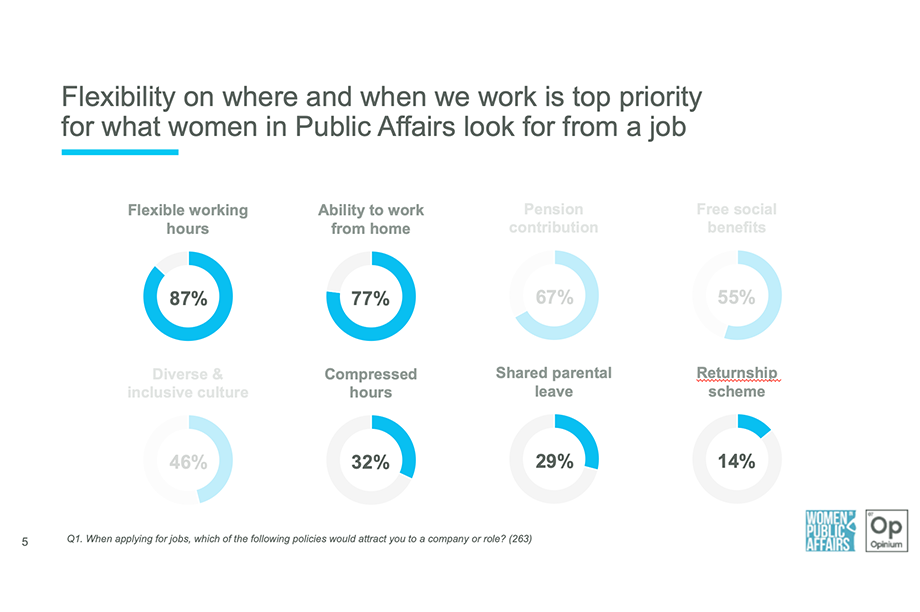 Flexible working practices proved most popular, chosen by nearly 90 per cent of respondents, while nearly 80 per cent opted for the ability to work from home in some cases.

Pensions, social benefits and diversity policies also proved popular, while nearly a third of respondents said the opportunity to work compressed hours was important to them. 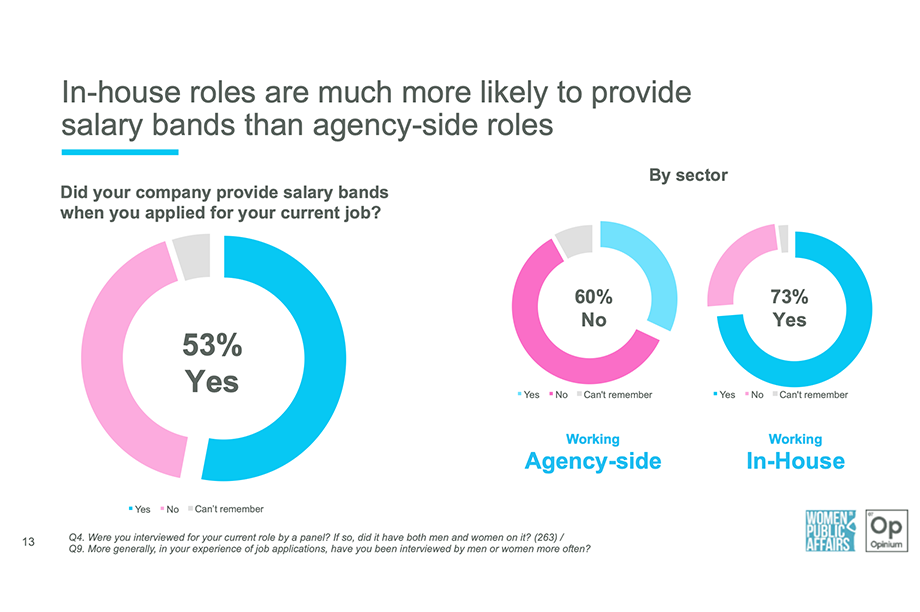 Those surveyed were asked a range of questions about how comfortable they felt about asking about an organisation's policies during a job interview.

Women completing the survey were asked about their experiences in-post, after they had been hired.

Asked whether their organisation provided the following, 80 per cent told the survey they had the opportunity to work from home, two-thirds said flexible working was possible, and a quarter said compressed hours were offered. Just six per cent offered a returnship scheme for people who had taken a career break.

Almost all respondents said they had worked from home before, but more than one-third said they only did so in exceptional circumstances such as a childcare-related issue. 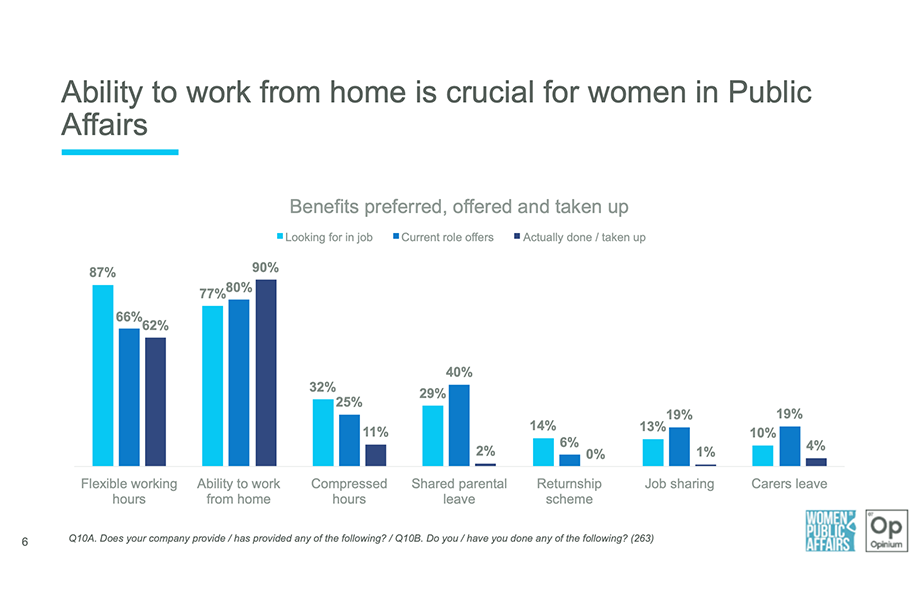 Some respondents were less than complimentary about maternity leave practices, with several citing this as a barrier to their career progression, fearing being left behind when they return to work, or calling for the sector to overhaul its policies as a whole.

One told the survey: "I'm aware that at director level, most women take very short maternity leaves." Another said: "Our maternity package is very weak and has deterred recruitment of strong female candidates."

Respondents were asked what support, if any, they received in the workplace to progress their careers.

In all, more than three-quarters had received some form of in-work support for their careers, but the remainder did not receive any.

Opinium sought to uncover respondents’ attitudes to transparency on pay and career-progression policies at the organisation they worked for, with 60 per cent telling the survey they did not consider it transparent.

But there was better news for how supported women feel in the workplace, with more than half telling the survey they were satisfied with their organisation's approach.

Just over 40 per cent of respondents said their organisation published information on its gender pay gap and half said that maternity and paternity policies were made public. 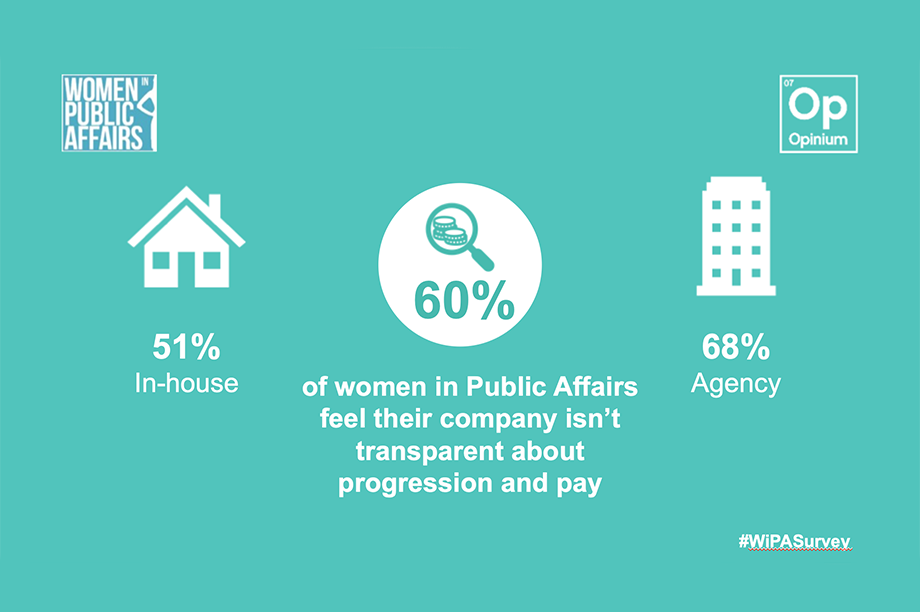 Nonetheless, of those who said gender pay gap data was published, only half said it had contributed positively to conversations about pay parity, while a quarter said it had helped a little.

Of those who said their company did not publish its gender pay gap, nearly 80 per cent called on their organisations to do so. There were similar levels of support for employers to publish maternity and paternity policies where they did not already do so.

Respondents told the survey that their organisation was doing little to address the gender pay gap.

One said: "We have the published reports that show there is a big gender pay gap at my organisation. There is also a senior leadership team that is mainly male."

Respondents were asked to rate their chances of becoming the head of their team at their own or a similar organisation.

Overall, more than half told the survey it was likely – more than 70 per cent of those aged 35-54, falling to just under half of those in the younger demographic.

Women also had more confidence in their leadership prospects if they worked in-house, 60 per cent of whom answered positively, compared to 43 per cent who worked in agencies.

One respondent said of her career prospects: "I am female, BAME and Muslim. The odds are stacked against me."

Opinium chief executive James Endersby said men working in the public affairs sector must step up to help prevent discrimination against women in the workplace.

Commenting on the overall results of the survey, WiPA chair Laura Sainsbury said they were an "urgent wake-up call" for the sector.

She added: "This research should be shocking, but sadly it isn't. Our research has shown not only that the industry must do more to modernise and support women to reach the top – from advertising salary bands to normalising modern working trends such as flexible working – but it also needs to address other diversity issues such as race or socio-economic background."