Katie Price, Lauren Goodger and DJ Melissa Reeves are the latest celebrities to fall foul of the Advertising Standards Authority for promoting a weight-loss product on Instagram.

Their influencer work for BoomBod – a product that promises to "banish naughty cravings with 10 calories" and "weight loss in a week" – led to a series of complaints that the UK ad authority has upheld. However, it's not the only contentious weight-loss product that two of the stars promote (see below).

The posts were ruled to promote a dieting product in an irresponsible way, make health claims that were not authorised by the EU Register, and tout a rate of weight loss that is prohibited by the advertising code.

Reeves, a Liverpool DJ and former Ex on the Beach star, posted in March that she felt "more fit & toned and a lot more confident" since she finished her BoomBod program.

Goodger, also posting in March (pictured below), said: "It works so well to decrease bloating and get rid of those late-night cravings. This difference I’ve noticed from using this stuff is amazing".

Meanwhile, Price, who has posted at least three times about BoomBod, said: "Quick & Easy weight loss is great, but doing it in a healthy way is key. These shots have a bunch of vitamins, use a clinically proved natural fibre, contain zero laxatives and most importantly… they give results EVERY time!" 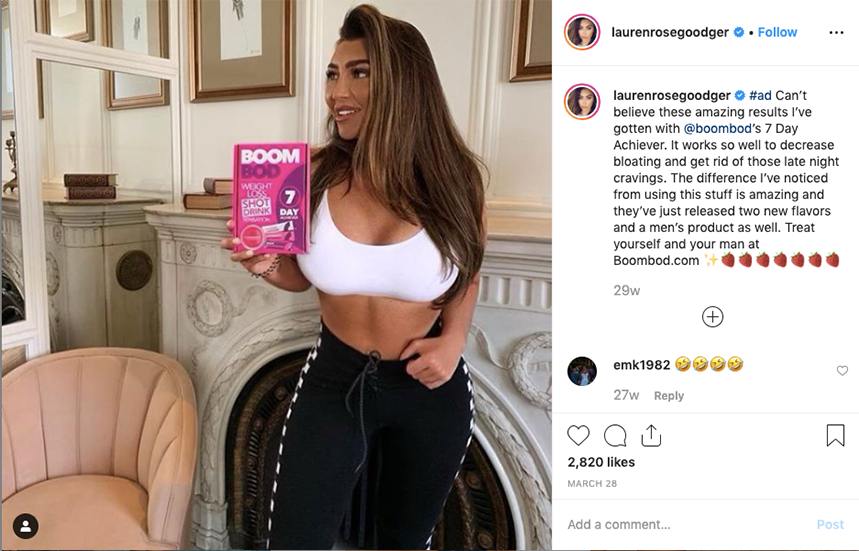 BoomBod agreed to remove the ads in question and talk to influencers to rectify the problem. However, at the time this article was published, all three posts were still live on Instagram.

In defence of her post, Goodger said she did not claim weight loss, but that the product helped deal with bloating and hunger. She said her post did not encourage the long-term use of BoomBod.

Price said she had merely "communicated her thoughts on the product".

In their ruling, the ASA noted that it was also concerned the photo of Goodger appeared to be edited to make her waist appear artificially thin – which was irresponsible in the context of advertising an appetite suppressant.

The ASA also took umbrage to Reeves connection of a "feeling of confidence" with slimming down.

The trio are the latest celebrities and social-media stars to be rapped by ad authorities, although often it is for a lack of transparency in using #ad – such as the case with Love Island star Olivia Buckland and hundreds of others.

PRWeek has learned that both Price and Reeves have also run paid Instagram posts for a similar product called Skinny Coffee. 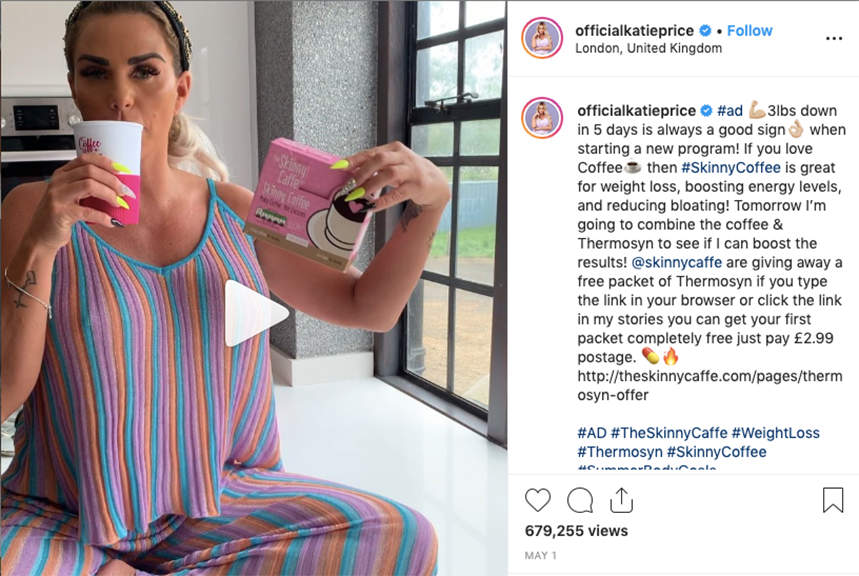 Reeves did not tout Skinny Coffee for weight loss, but said the product made her feel great.

Recently, the ASA cleared several influencers for posts about vaping products, but found there had been no commercial relationship in place.

Earlier this year PRWeek revealed that influencer marketing has become a prominent tactic of Big Tobacco companies to promote e-cigarette products, and that Instagram allows tobacco companies to its platform to market cigars, provided they weren’t paid ads booked through its Ads Manager tool.

A new influencer marketing guide has been released by #FuturePRoof.