A new study by Searchmetrics has revealed that with more than one million searches a month in the UK for terms around 'Brexit news', the BBC site is by far the most visible on Google for Brexit-related searches.

It appears most often on the first page of search results with a share of almost 30 percent.

"The BBC's dominance suggests that, despite criticism and accusations of bias from all sides, Google views the BBC as the number-one authority for relevant online information about Britain's exit from the European Union."

Looking only at the Google performance of UK national newspaper websites on Brexit, the research reveals that The Guardian takes the top spot, appearing on Google’s first page for the biggest number of Brexit-related keywords.

It is followed by the Independent, Express and Telegraph, while The Sun's site has the biggest market share for keywords related to 'no deal Brexit'.

"Our research highlights which major players are answering people's questions as the debate around the leave, remain, deal or no deal options rages on," added Bench-Capon.

While the Liberal Democrats are beating the UK's other political parties on Brexit Google search, Labour is second, followed by the Conservatives. However, as the table below indicates, the party websites' search performance for Brexit broadly reflects their political positions on the issue. 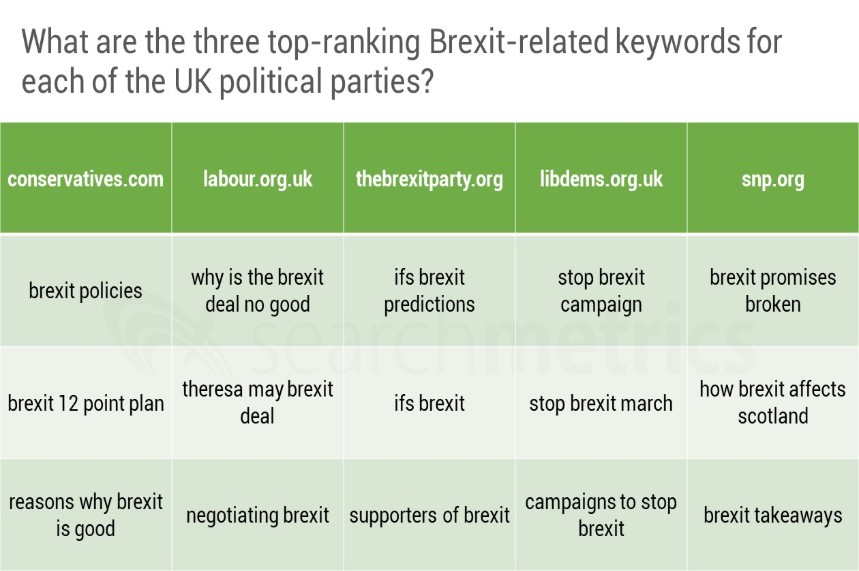 Additionally, in about 84 per cent of searches on Brexit-related topics, Google AdWords ads are present above the organic search listings on the first page. About 47 per cent of results have search ads appearing underneath the organic listings.

It accounts for approximately 41 per cent of the ads displayed beneath the organic search results, and 79 per cent of ads at the top of the results page. Many of these link to gov.uk's 'Get ready for Brexit' campaign.