The event marked the one-year anniversary since the setting up of the industry body’s Public Affairs Board, and it kicked off with a chat between former editor of Public Affairs News and head of content at WPI Strategy David Singleton, and Raoul Ruparel, former special adviser to Theresa May during her tenure as Prime Minister.

Ruparel reflected on his time being lobbied in Downing Street. "I think there was a widening gap with business, but it wasn’t a conscious choice, just a different interpretation of where the centre of politics was. She [May] was left of centre economically but right on social issues," he explained.

He described the quality of lobbying during his time in government as mixed, and really depending on attitude and timing.

"The stuff I found most effective was the groups that came with good proposals, but some businesses would just come through with a list of problems and ask how we are going to solve them."

He described how some businesses would start a public campaign first without having made any contact, which could be interpreted as that sector already having a position, and then trying to strong-arm the government.

Singleton asked how difficult it had been to manage Brexit in the current environment.

"Businesses have very legitimate concerns and you will come across true believers but most just want to make the most out of it," answered Ruparel.

Last week he published an article outlining why he thought a Brexit deal was still possible and Singleton was keen to know whether that was still the case.

Ruparel said it was possible but maybe not in the next week or month. He described it as fascinating that it had taken Boris Johnson’s government so long to come out with its own proposals, and said it would be interesting to see if they stuck to their current no-deal strategy or pivoted towards a deal.

"No 10 have made the calculation that they won’t get blamed for an extension," he said.

Ruparel’s insights were followed by a panel discussion on what good lobbying looks like. Senior accounts manager at Newington, Tiffany Burrows, said it was about ethics and transparency, using influence for the better and making sure the information you are providing is credible.

"It's as important to maintain relationships with staffers and civil servants," said Laura Blake, a partner at Connect.

"It’s no good having good relationships if you don’t know people’s motivations," said Flora Coleman, global head of government relations at TransferWise. She said that "wining and dining" and leisurely lunches were not really compatible with professional workloads.

Elin de Zoete, managing director at PLMR, agreed. "I don’t think it’s acceptable to make policy in that way either," she added.

Burrows said trust was also important. "If you can’t trust the person how can you trust the industry?" she asked.

Blake explained how lobbying methods in the digital age were similar, but that now there were more channels like Twitter available.

"PR, PA and digital should be integrated into everything you do," added de Zoete.

‘Spirit of the legislation’

Harry Rich, the Lobby Registrar, then provided his view on the industry and discussed some changes that may appear in the future, including making all meetings registerable activity. He explained that consultants are not currently required to register meetings in which they do not take part.

"But that doesn’t seem very easy to police or in the spirit of the legislation," he explained.

Rich said the rules around written and email correspondence could also be simplified, and explained how the current guidance allows lobbying activities that come from other industries like legal and accounting to operate under their own codes of conduct.

But he said: "It maybe that [in the future] we require you to show how that code of conduct is enforced."

James Crouch, head of omnibus and research manager at Opinium, then presented the results of the first PRCA Public Affairs Census, which found the industry is London-centric, overwhelmingly white, is far more likely to be privately educated and leans Conservative.

The conference ended with a panel discussion on what the PRCA’s PA Board had learned since its merger with the Association of Professional Political Consultants, and discussed the findings of the census. 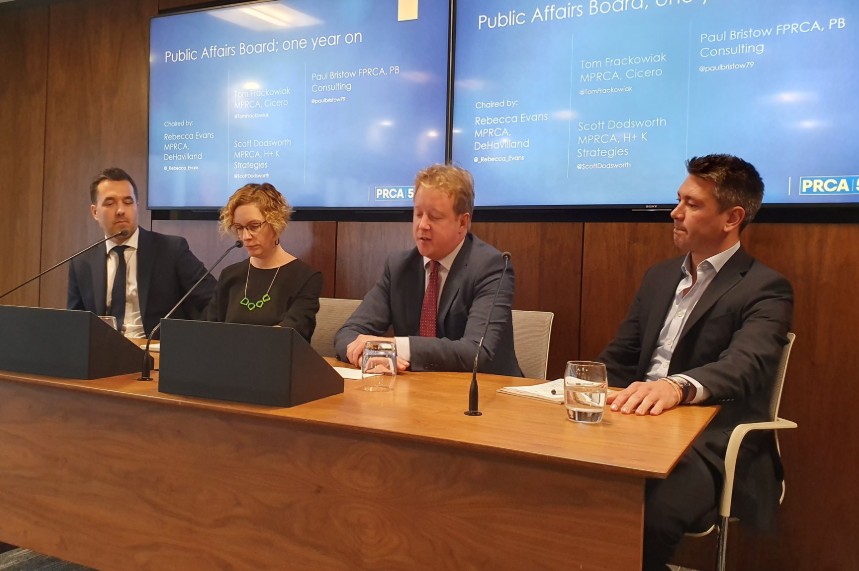 Paul Bristow, managing director at PB Consulting, said the merger had been important because it was "important for the industry to speak with one voice".

Managing director at Cicero Group, Tom Frackowiak, said he thought the regulatory framework did need to be looked at to include other sectors, in-house professionals and think-tanks.

Bristow agreed but added: "Be careful what you wish for." He thought there was often negative connotations around what the industry does, so they needed to make the case for the crucial role the industry plays in good governance and economic value.

"The census really gives the board the buy-in with the industry to talk about and improve what we do," said Frackowiak.

Scott Dodsworth, head of political and public affairs at Hill+Knowlton Strategies, said the census showed that the industry had to think not just about the quality of its work but how it was treating its staff – and as members of the Public Affairs Board it was something the panel was going to look at, and propose how they can raise standards across the industry in the coming year.