More than two-thirds of public affairs professionals are based in London, operating in and around the ‘Westminster bubble’, and a similar proportion (64 per cent) are male.

Seventy per cent of those polled received a pay rise in the past year, while 58 per cent received a bonus with a payout £6,650.

In this study, senior employees (60 per cent) outnumbered juniors, which could have skewed salary calculations.

A fifth (21 per cent) attended a fee-paying school, which is three times the UK average, 88 per cent have an undergraduate degree and 43 per cent have at least a Masters or further qualifications. Interestingly, the majority (54 per cent) have a degree in social studies.

"The lack of diversity and equality in the industry is concerning. Almost four in 10 responding to the survey went to fee-paying or selective schools, which is well above the national average. And a gender pay gap of seven per cent exists in comparing the pay of men and women. As communicators, we cannot do our job effectively if we only represent a minority of the wider population," said a statement from Public Affairs Board co-chairs Emma Petela and George McGregor.

"Mental health should be a growing concern for all employers.  A fifth of public affairs practitioners have been diagnosed with a mental health condition and as an industry we have a moral duty to support these employees."

The study of 159 public affairs professionals was carried out by research partner Opinium.

It found that a fifth or practitioners have been diagnosed with a mental health condition, affecting those who have worked in the industry for five years or less even more. 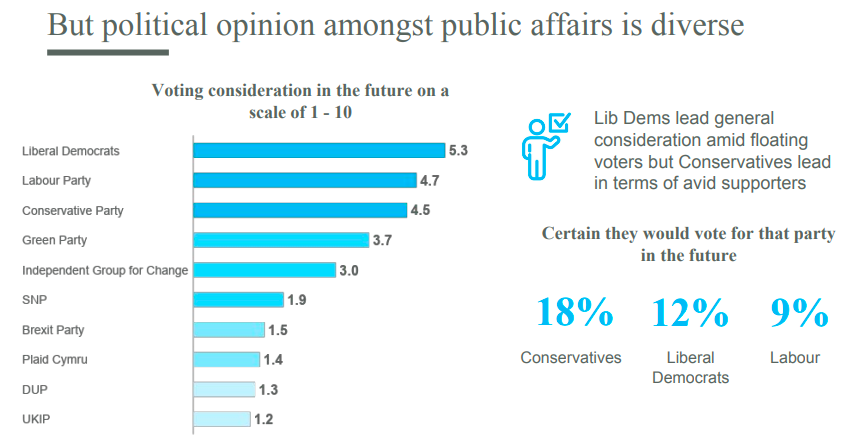 The public affairs industry attracts more right- and centre-leaning voters than left. Conservative voters accounted for 18 per cent of those polled, well above Liberal Democrat voters (12 per cent) and Labour (nine per cent).

There was an even spread of swing voters across a number of parties (see chart).

Internal counsel and crisis management has grown in importance over the past two years, while the most common role, lobbying, is set to decrease (see chart below). 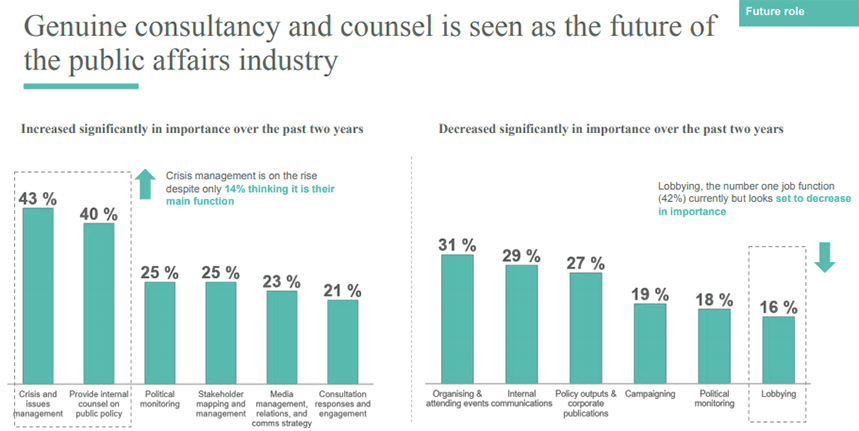